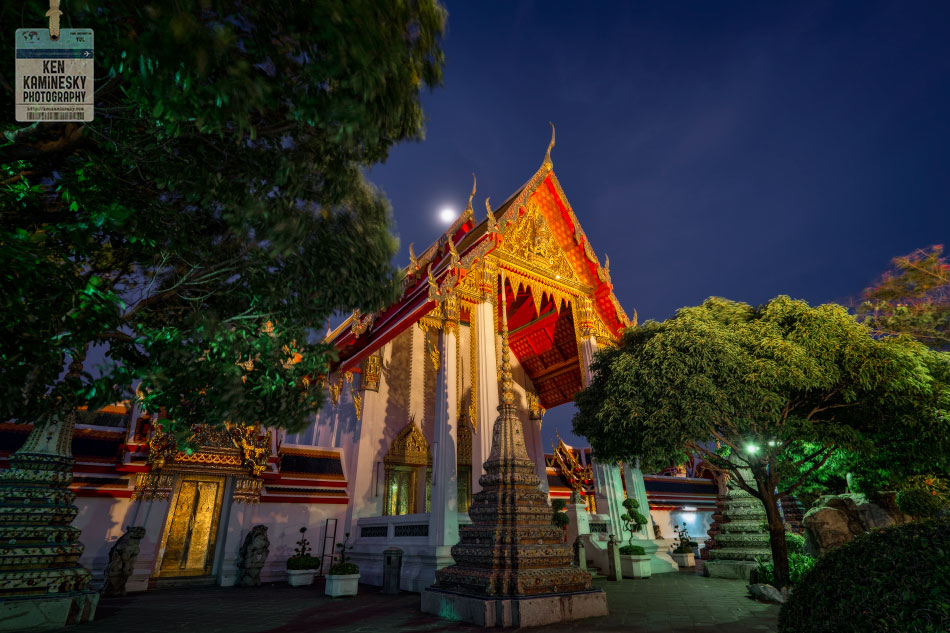 I had just a few days in Bangkok on my recent awesome trip to Burma/Myanmar with Viking River Cruises and had not prepared much in terms of photography for the Thailand leg of the tour. I should have taken my own advice and researched a bit but since I knew that I had only one night where to get out to shoot, I figured I could do that upon arrival.

I had planned on shooting the beautiful Wat Arun temple at sunset and blue hour. The photos that I had seen of the temple showed that it illuminated at dusk and made for stunning blue hour shots. The contrast of the golden temple on the background of a deep blue sky makes for some excellent photo ops. Sadly though–and much to my dismay–I arrived just before sunset to discover that the whole place was covered in scaffolding. I kicked myself for not researching better but then had to make a decision on what I could actually shoot that evening. I didn’t have much time to figure it out as the sun was already beginning to set.

I pulled out my iPhone to start looking up alternate places in the vicinity and before I could find anything, I discovered myself standing in front of the Wat Pho temple complex adjacent to the Grand Palace. While it was good fortune to find myself with an easy alternative location to photograph, I was just about to uncover the fact that Wat Pho closed it’s doors to the public at 18:30… Just the time I wanted to be taking photos. Just when I thought that my bad luck had turned good, the universe decided to pull the rug from under my feet once again. I decided to pay the entrance fee and take my chances regardless of the posted closing time and to my surprise, the ticket agent told me I could spend an extra hour or so in the complex. Now I had to make the best of my limited time.

The temples, stupas, and other buildings are stunning, and I walked around the complex in hopes of finding a good sunset location to photograph. Unfortunately for me, time was running out. The sun was quickly setting, and there were still quite many people walking about or standing in front of what could have otherwise been ideal image material. It was either wait for people to move or keep searching. If I could walk away with one good photo this evening, I’d be happy but being greedy like any photographer would be surrounded but such beauty, I wanted more.

It was a lovely sunset. Not that I have any photographic evidence to prove this fact. You can’t win them all, and this was a case of choosing to use my time wisely during sunset to find good locations to photograph during blue hour. I must admit though, it was slightly painful to look at the soft pastel pinks, oranges, and yellows in the sky, knowing all along that I wasn’t getting my sunset shot. Oh well, there was no point dwelling on it and in the end I got a couple of blue hour images that I am quite pleased with. That, coupled with the fact that I plan to be back in Bangkok later this year makes it a bit easier to smile when looking back at this evening that was a bit of a roller coaster in terms of lucky and unlucky moments. 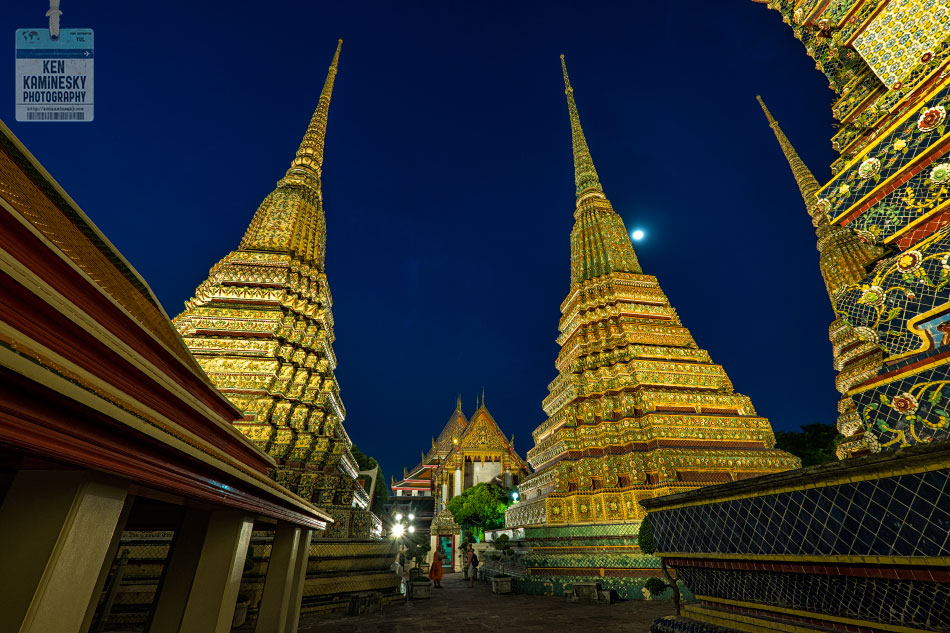 As I was exploring the maze of buildings at the temple site, I did see several monks walking around which, of course, is quite customary. What you don’t see so often is monks having long discussions with travellers. So, when I saw the monk and woman in the above photograph having a long and drawn out conversation, I found myself smiling at the nice cultural exchange. I walked around the whole complex several times and found myself back at this spot more than once in hopes that they would have finished their conversation thus allowing me to get a photograph unencumbered by human presence. In the end that was not to happen. However, in this case, I’m actually happy to have a couple of people in the photograph as they are an integral part of the story. They must’ve been talking for well over an hour in that very spot. Even as I left the temple area for the evening to head back to my hotel, they were still discussing philosophy.
What a perfect way to cap off the evening and my whole trip to SE Asia. It was now off to Italy to run my annual Italy Photo Tour to start a whole new adventure.

For once you have tasted flight you will walk the earth with your eyes turned skywards, for there you have been and there you will long to return.
~Leonardo da Vinci

The trip began with the perfect flight on Cathay Pacific’s business class. It’s no wonder that they were voted the number one airline in the world last year. After having this rare opportunity to fly in such luxurious style, I arrived in Bangkok well rested and ready to get to work with none of the jet lag I’m accustomed to experiencing on such long haul flights. Thanks Cathay Pacific, for allowing me to continue to live a “Life Well Travelled“. The trip to Thailand and Myanmar was one of the best and certainly most relaxing times I have spent in years thanks to Cathay Pacific and Viking. The attention to detail on the Viking River Cruise was spot on and the ship’s crew and other Viking staff were on the ball from the moment we arrived in Bangkok. I’m looking forward to being back in SE Asia for more adventures later this year when I visit Vietnam, Cambodia, Thailand and more.