Before anyone goes and congratulates me on how beautiful this photograph is, I’d like to direct your attention to the photographer actually captured and edited the image.

So why am I posting this photo and not one of my own today? I’m glad you asked.

It seems that another photographer by the name of Danny Xeero (AKA Danny Tan) decided that it was ok to steal Mr. Zsigmond’s photo and sell it as his own… or at least half of it.

“Stealing is stealing. I don’t care if it’s on the Internet or you’re breaking into a warehouse somewhere – it’s theft.”

So how do you steal half a photograph? In this case Mr. Xeero used the sky from the above original photograph and photoshopped it into an image of his own from New Zealand. 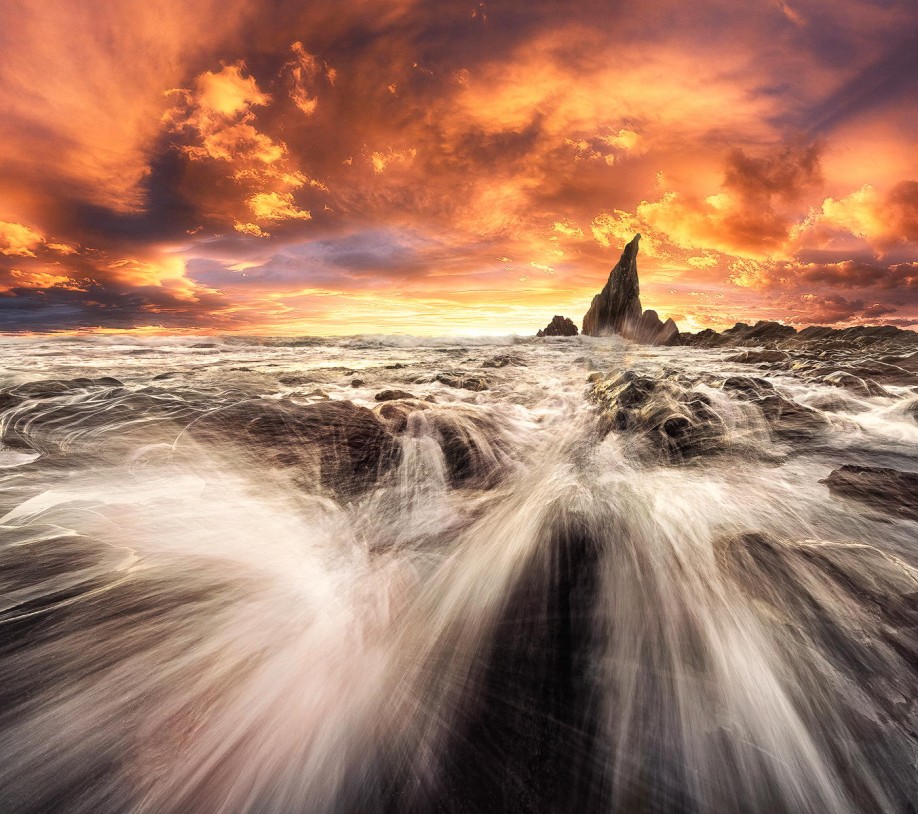 Danny Xeero claimed this was 100% his work

What a shame he had to steal another photographer’s work to create the image. What’s even worse — in my opinion — is the fact that Mr. Tan has a lot of very nice work of his own. At least I think it’s his work. After this debacle I’m not so sure I believe that all of his work is 100% his own imagery. If most (or all) of Mr. Xeero’s other photography on his website is his own art, then I really scratch my head and wonder why he felt it necessary to rip off a fellow artist. The man obviously has talent. What he certainly does not possess is good judgment and if one wanted to go further you can certainly question his ethics.

The composite image that features the two blended shots was originally posted on July 28 and it was only after Mr. Zsigmond discovered the image blatantly posted on 500px (the image was removed on August 6) and wrote about it on Google+ that the offending image was removed from Xeero’s Google+, Facebook, and 500px accounts where it had gone quite viral and received thousands of likes, shares, and comments. What makes this even worse is the fact that Xeero a gallery called The Camera Museum  is showcasing his work including the stolen image. Not only was Xeero using the image and claiming it as his own, he was attempting to sell copies of it without compensating or crediting Mr. Zsigmond.

After Zsigmond wrote about the theft on Google+ Xeero came out with a less than heartfelt apology on Facebook.

“A public apology to all the people”

I am sure most of you would know by now for the mistake I made on my latest image titled, “The Poseidon” in which I stole an image (the sky) of a photographer (from Google Images) who goes by the name Zsolt Zsigmond(https://www.facebook.com/RealityDream.photography) and composite it in one of my images. I take full responsibility for my action and I sincerely apologise to all of you for letting you down too with this one mistake. What is important is that the photographer whose image I had used has forgiven me for what I had done and that is what matters the most.

Having said that, I would like to be clear on some facts about my work too. This is the FIRST and LAST mistake I will EVER make. The rest of my work is Authentic and if it were not, they would’ve been taken down a long time ago.

However, this incident has also given me the opportunity to realise who are true friends and who stood by my side after I admitted to my mistake.

For those who can`t accept my mistake & apology, please feel free to unfollow,unfriend,un-circle me.

While many of Tan’s friends came to his defence in the Facebook comments following his apology it was noticed that several negative comments were deleted to make it appear that the overall reaction was positive. As the negative  comments became more numerous, Xeero relented and left them there.

I find a few things about the apology to be quite unapologetic. Saying that if his work was not authentic he would have taken it down a long time ago seems rather disingenuous. Especially considering the fact that not so long to go (last week) he was doing the opposite and uploading non-authentic images, promoting them all over social media and attempting to sell fine art prints of the combined images. Saying that he knows who his friends are is a bit odd to me. What do stealing images and friendship have to do with each other?

To me the last sentence sounds very sarcastic and not a fitting way to sound contrite.

“Real integrity is doing the right thing, knowing that nobody’s going to know whether you did it or not.”

Many of the comments in support or defence of Tan talked about his “courage” and “integrity”. There is no courage on admitting that you did something wrong after you get caught red-handed and outed. The courageous thing would have been to admit you had done something wrong before getting caught, apologize sincerely, and make reparations to the offended party. People using the word integrity in this situation clearly need the dictionary definition read to them.

As many of you know I have written several articles on my blog about copyright in photography and this is a subject that is dear to me. You can find links to all the articles on photography copyright issues in the sidebar of my blog to the right-hand side. If you’re looking to protect yourself as a photographer I suggest reading the interview with Joe Naylor the CEO of Imagerights. Joe is a fountain of knowledge about the subject and his company is doing great things to help photographers protect themselves from copyright violators.

All too often these kind of image copyright violations go unreported or are not pursued. Many people are afraid to be the one to take a stand and call an artist out for stealing work and claiming it as theirs. By turning a blind eye to these infringements it only encourages other people to do the same in the future. I’m puzzled by the people who are defending Xeero. Sadly all the puclicity in this debacle is going Xeero’s way and what we need is more people sharing and publicizing Zsolt Zsigmond’s work. On that note…

I’m curious to hear what you think and I won’t delete any comments. Please keep the discussion civil.

For more articles on © please check out the following posts: