Art on the Road: Los Angeles 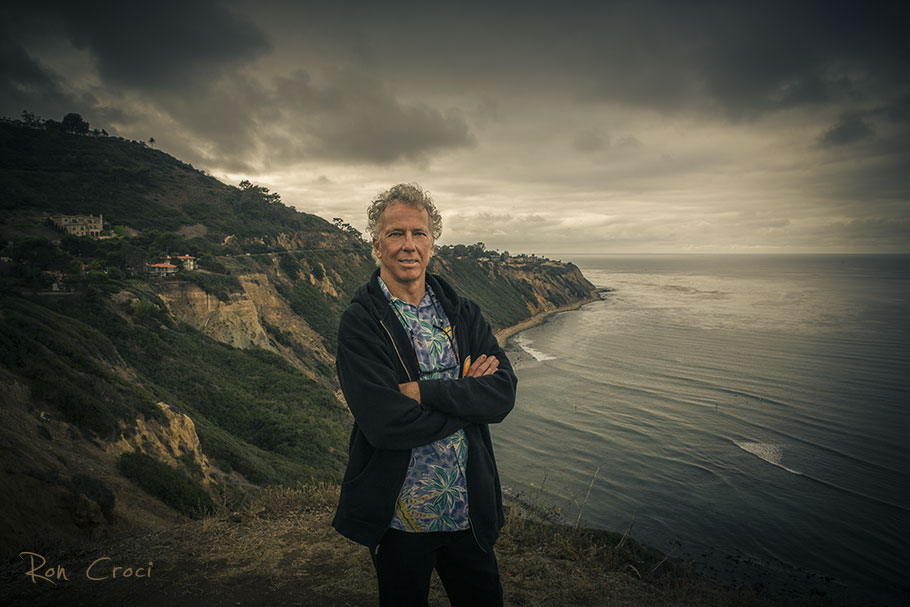 When I grow up I want to be just like Ron Croci. The featured Art on the Road artist for Los Angeles has it figured out quite nicely. He lives in southern California and still spends a good deal of time in Hawaii. He has worked in Hollywood for decades as a designer, illustrator, and storyboard artist and conceptual artist on the design teams of over 45 feature films such as Ghostbusters, Blues Brothers, and Planet of the Apes, as well as many made for TV series like Magnum P.I. of which he was an illustrator for three seasons. He has his art hanging in galleries and museums all over the world. He has collaborated with giant surf name brands such as Roxy, Quicksilver, Hawaiian Surf, Town & Country, and many more. He has worked on over 200 advertising gigs with major ad agencies. He also has 13 books on the market as well as murals, t-shirt and greeting card art. All this AND still finds time to get to the beach every single day… My hero!

I met Ron in his art filled house in Torrance and from the moment I stepped foot in the door I felt like I was walking into the home of an old friend. How can you not feel comfortable with someone wearing a Hawaiian shirt in a place filled with tapestry, paintings, carvings, and sculptures? Not only is Ron an outstanding artist but he obviously has a deep appreciation for art in general, after all it runs in the family. 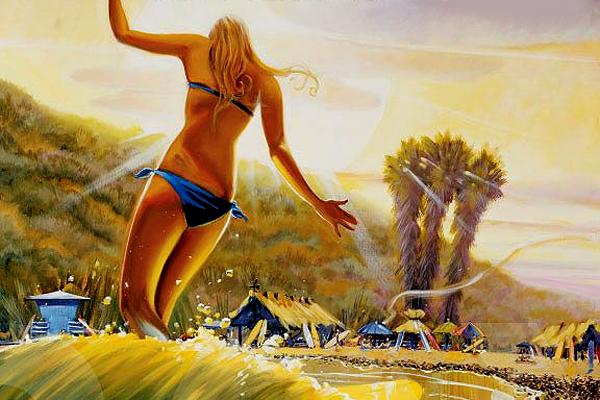 Ron’s son Jeff Croci is a renowned tattoo artist in San Francisco, his daughter Paloma Solidad is a costume and couture designer and his father in law Joe Montell was a pioneer in the world of tapestry and animation (an interesting mix indeed). 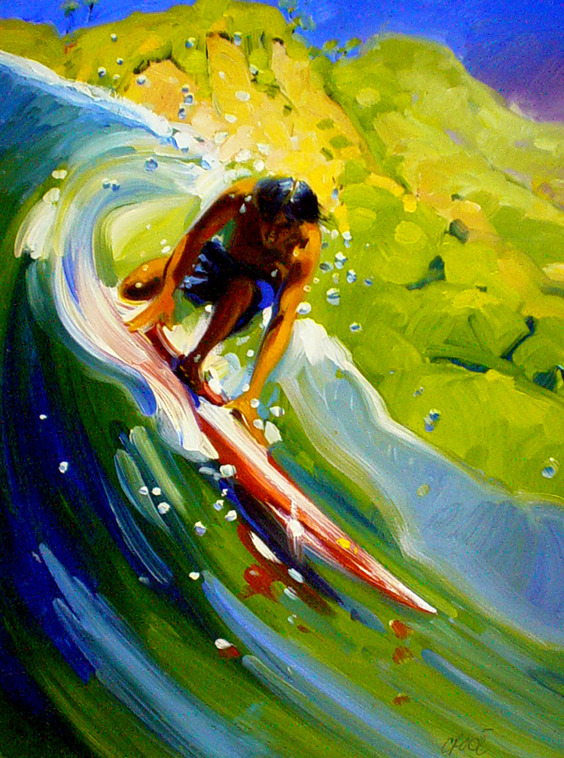 The moment that Ron knew that he wanted to be an artist took place in a library when he was 15 years old. Scouring through the art section, he came upon a a book with the Salvador Dali painting “The Persistence of Memory” on the cover and as soon as he saw it, he was hooked. From that point on Ron knew exactly what he wanted to do and he went ahead and did it.

Not many people can pinpoint the exact moment where they knew what their calling was and I truly enjoyed the trip down memory lane that Ron shared with me on this day. With such a rich art background and so many stories to tell it was impossible to hear everything about the man and the artist. The anecdotes that he shared with me were always told with an earnest enthusiasm and a wide smile, which only made me want to hear more. 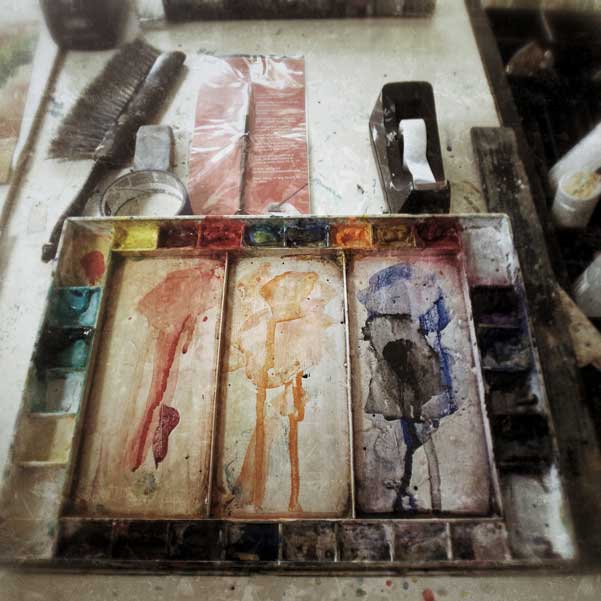 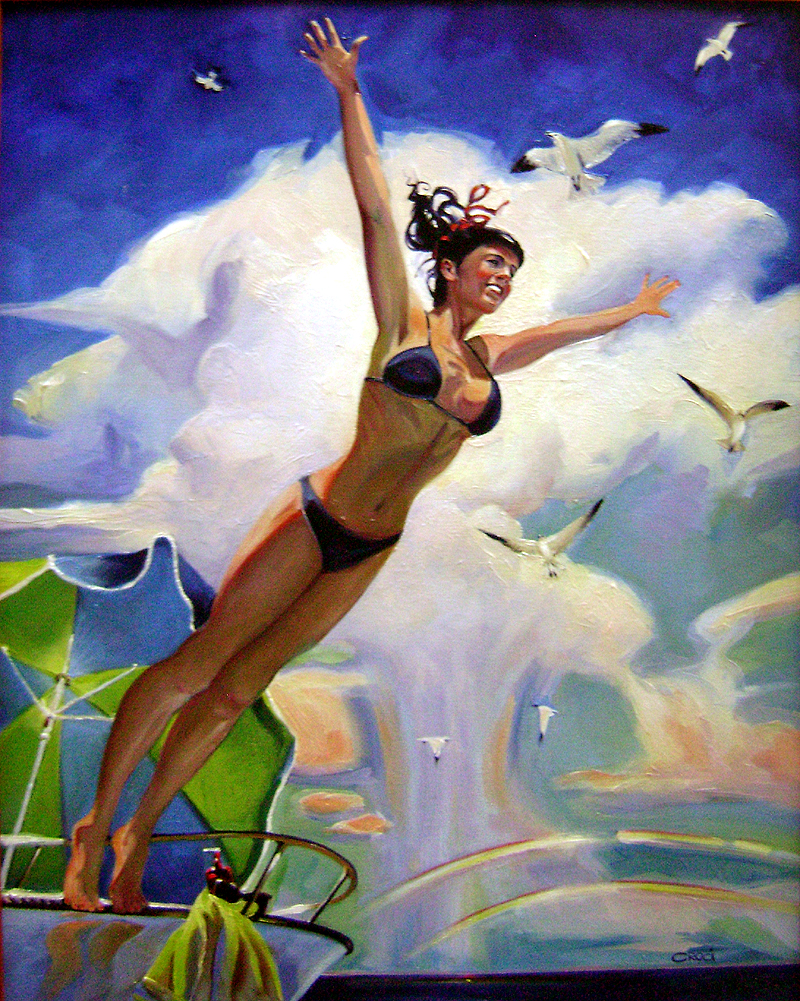 I’m always interested in an artist’s workspace as it represents a comfort zone for the creative soul. Although Ron has had studio space at all the motion picture studios in L.A. he also has a studio nestled in the back of his home and is full of works in progress. You’ll also find an archive of watercolors, oil paintings, storyboard art, notebooks, sketches and all the tools that he uses to work on his art. 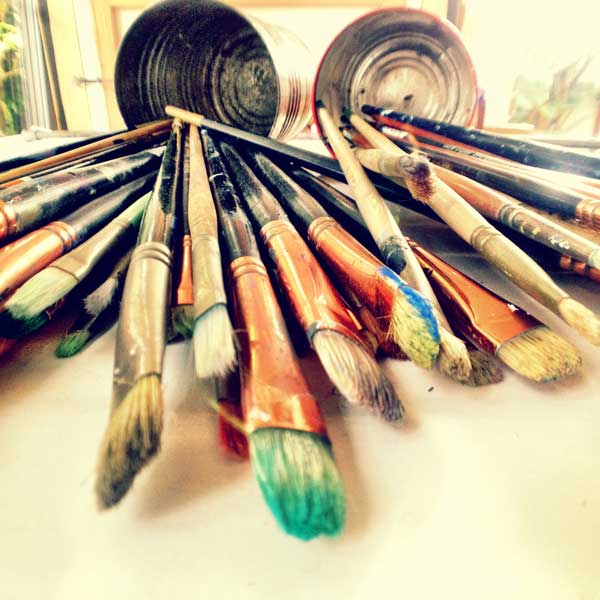 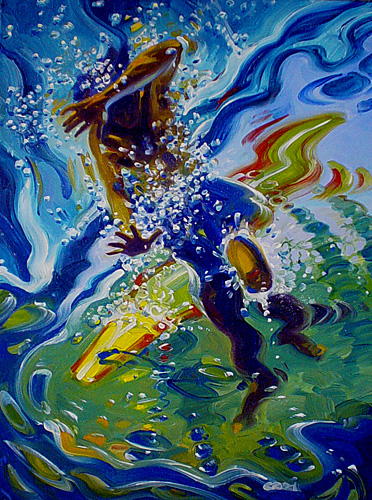 BACK DOOR WIPE OUT

One of the most interesting personal projects that Ron has been working on for years is something he calls “Beach Fights”. The series of paintings and stories he wrote consists of images and text that are about the violent lesser-known side of beach and surf culture in places like Hawaii and California. In order for Ron to paint one of his Beach Fight paintings there have to be blows exchanged. These paintings are representations of actual events, not made up in the mind of the artist. The series is a fascinating look at the sub-culture that exists behind the scenes of the outwardly peaceful facade of the surfing world. As Ron explains, drugs and alcohol or passion/jealousy involving the fairer sex mostly fuels these fights. That doesn’t mean that the fights are limited to men, there are several examples of women’s brawls in the series as well. 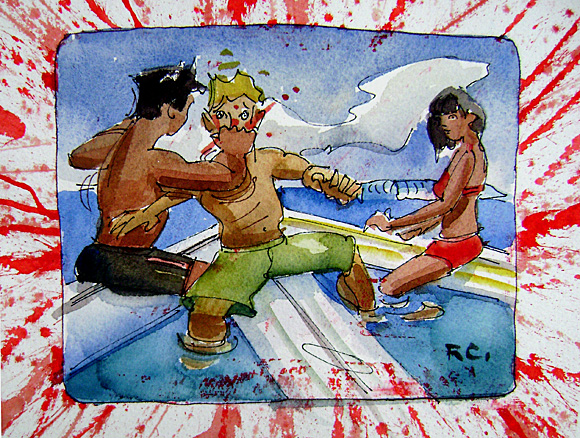 As time was slipping by and Ron continued to share stories and artwork with me I got the sense that no matter what type of painting, illustrating, or sketching you’d ask him to do, he would do it with enthusiasm and excitement. As he flipped through the binders of storyboards that he created for several major motion pictures and television series it was clear that part of Ron was re-living those Hollywood golden age times in his mind. No longer do teams of artists get together in a “bullpen” to create the storyboards that are crucial in the development and planning of a movie. Today artists work from home and the process is more sterile. This removes the possibility of mentors playing a role in the development of up and coming artists. What a shame. 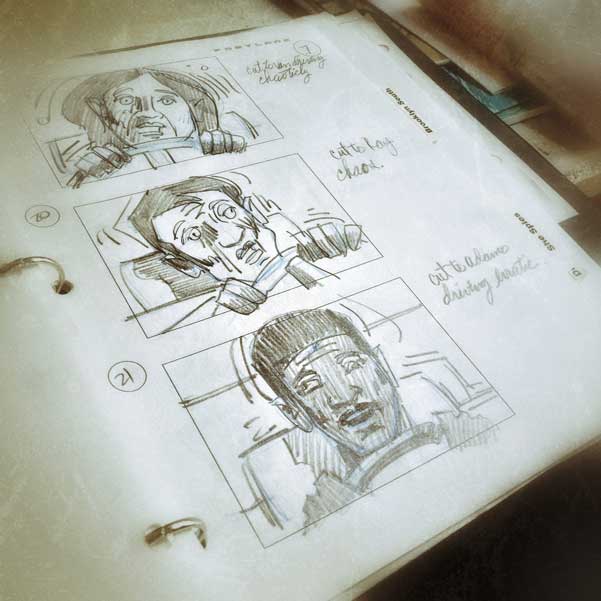 It’s no wonder that Ron looks back at these times where there was more social interaction in creating the storyboards, just take a look at his beach themed work and it’s obvious that he’s a people person. People are the main subject of the majority of his art and it’s clear that even if he has a fondness for the beach, his vision of the beach is not simply a dreamy landscape. The way I see it, Ron’s vision of the beach is one full of people who share a passion for this natural setting and are enjoying it to the fullest potential. 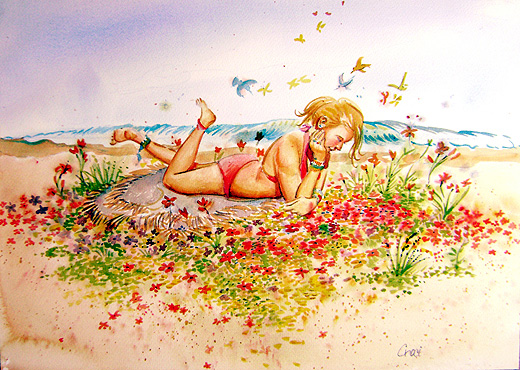 This type of positivity could certainly describe Ron as well; a man who is taking full advantage of his talents and passions in life and sharing them with the world in the best way possible… With stunning art! 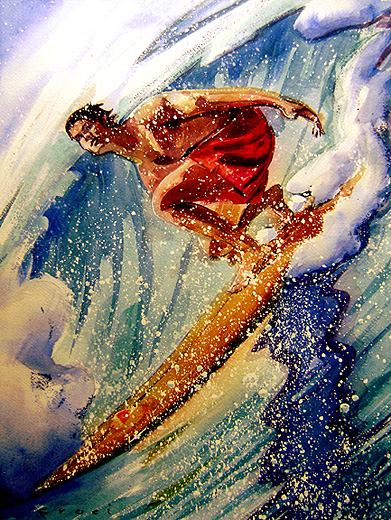 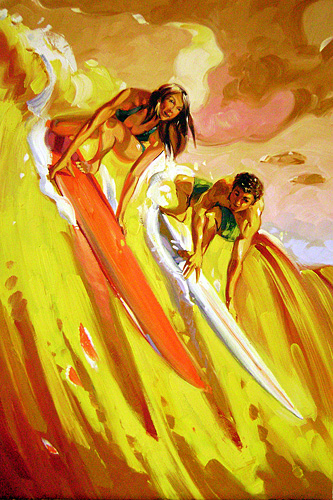 It was a privilege to spend the day with Ron as he showed me some of his favorite beaches in the area and talked to me about his passion for surfing. I’ve always been fascinated with the beach and it’s a dream of mine to learn how to surf one day. Being on a beautiful beach and hanging out with a great artist is a pretty great way to spend a day at work. Just like Ron, I love my job and wouldn’t trade it for the world. 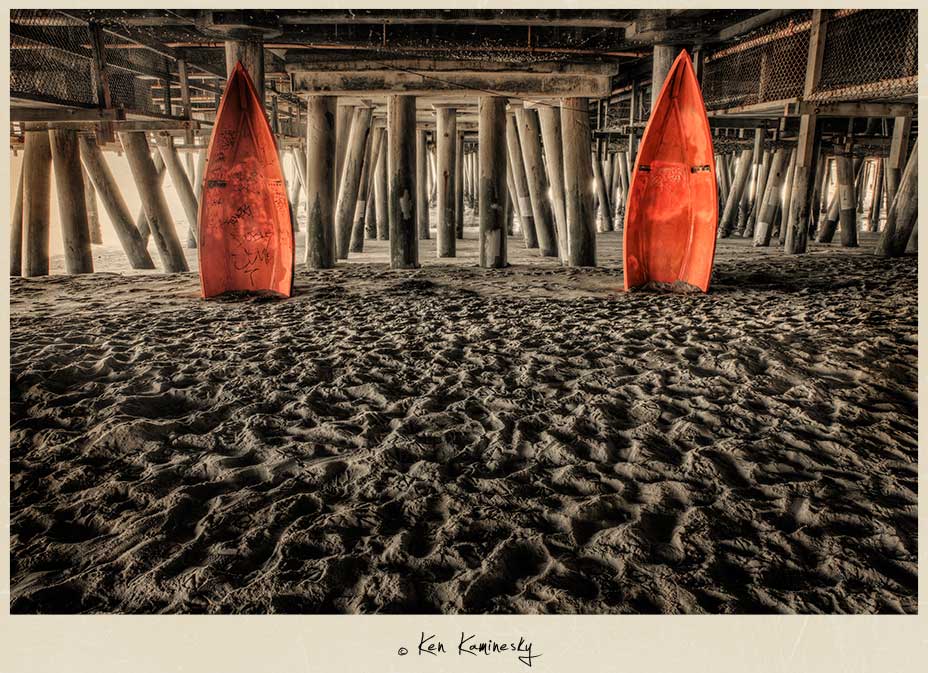 I began my quest for urban beach art the next morning at the famous Santa Monica pier. It was incredibly windy but the sun was shining brightly in the cloudless sky and I had a mission to accomplish. Los Angeles is vast and spread out over a very wide area so I needed to make good use of my time. 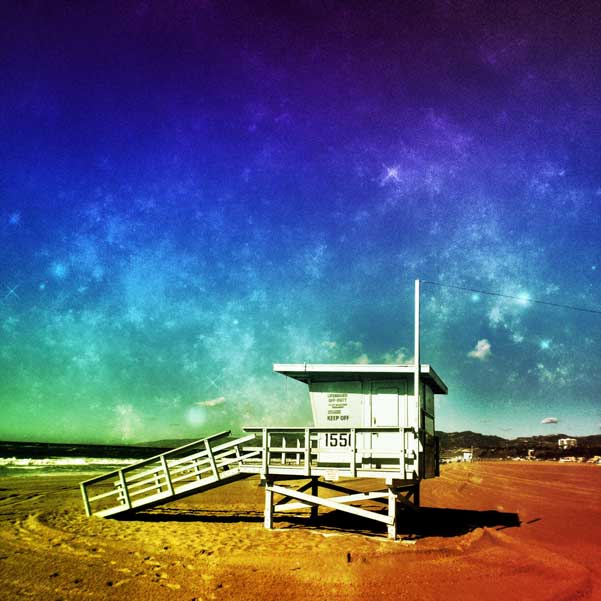 For a beach lover like me it’s easy to get lost in my thoughts while walking on the sand, listening to the waves crash onto the shore. That’s the magic of the ocean for me, the power and majesty of any type of beach always seems to draw me in. It could be a rocky beach in a remote area with no people around for miles, or a crowded sandy beach with the cacophony of people of all ages enjoying the energy that you can only find at the seashore. I love it. 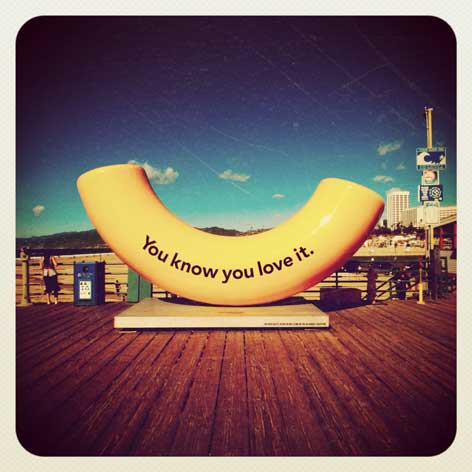 Searching for art allows me to explore parts of a place that I most likely would not have looked at. For example, who would figure that someone would place art under a pier? There it was, subtle yet powerful in it’s own way. That’s the beauty of art. It can be just about anything a person can dream up. 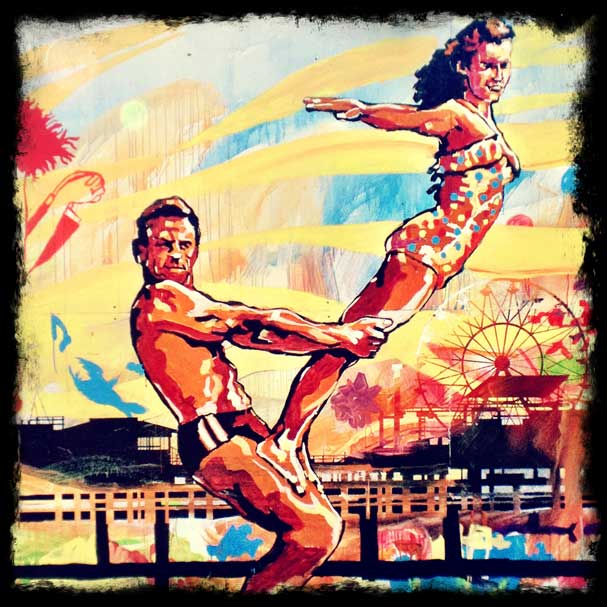 Art is everywhere and all you have to do is open your eyes and slow down a bit to appreciate it. Next time you’re in a new city, try taking a moment to stop and look around to try and spot some form of art. You’ll be surprised at how much you’ll find. 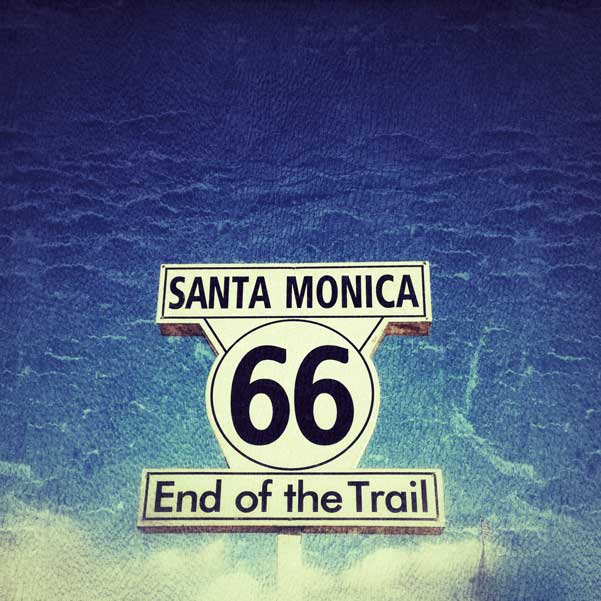 After a morning at the pier in Santa Monica it was time to head over to trendy and hip Venice beach for some eclectic beach art hunting. Venice is full of interesting shops, bars, and restaurants but the actual beach area is like no other place in the world. Sure it’s got the tacky souvenir shops but it’s the people that make the place. 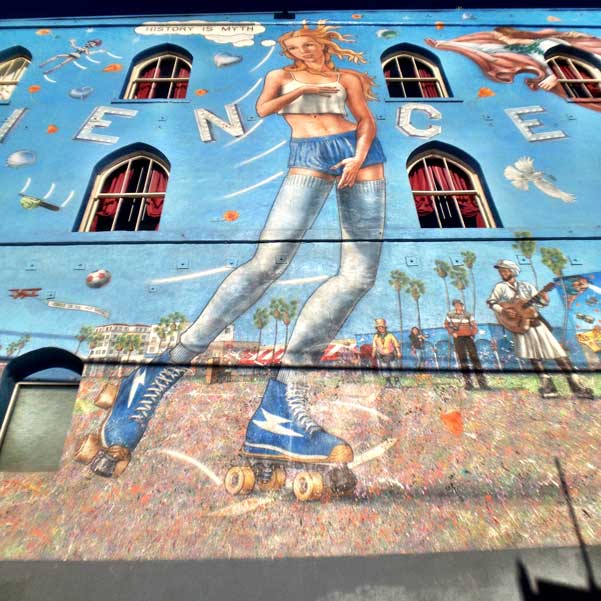 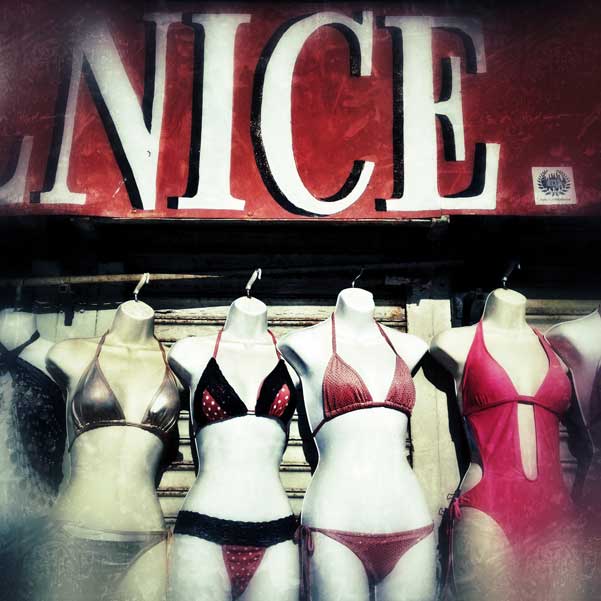 From the open-air gym at muscle beach, to the carnival like atmosphere of the Ocean Front Walk you’re sure to find a lot of interesting characters from the neighborhood and also a ton of cool art. Venice Beach has a long history of being a haven for artists of all kinds and I can see why. You can really be yourself in this quirky part of Los Angeles and many people take full advantage of that fact, for better or for worse. 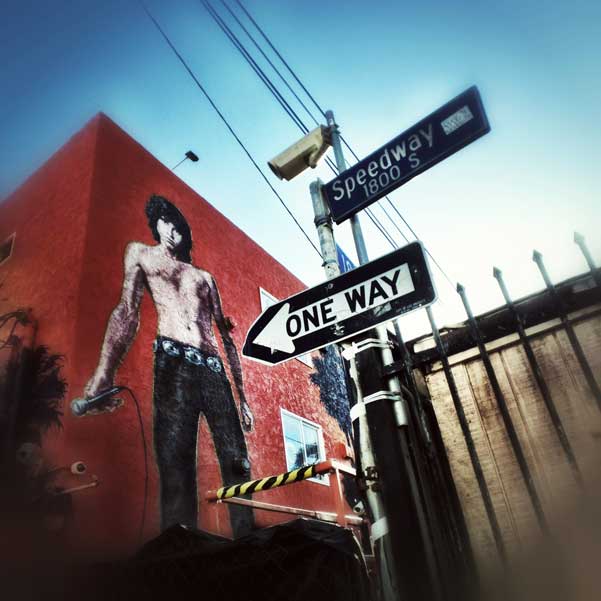 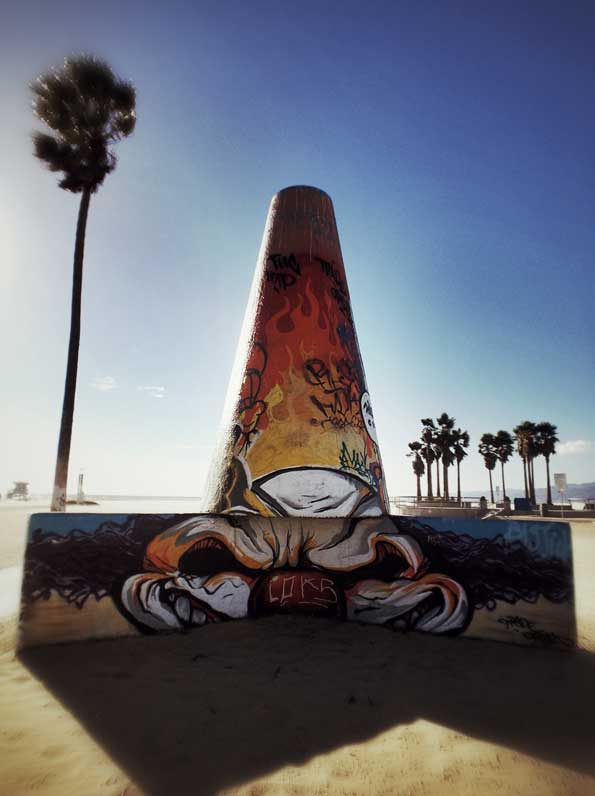 After stopping at one of those touristy t-shirt shops to buy a Venice beach t-shirt I made plans to head out to Malibu for a final sunset beach shoot. Unfortunately I did not make it there in time since the LA traffic was brutal on this evening but I did get back there the next day since I was spending some extra time in the city to catch up with good friends. 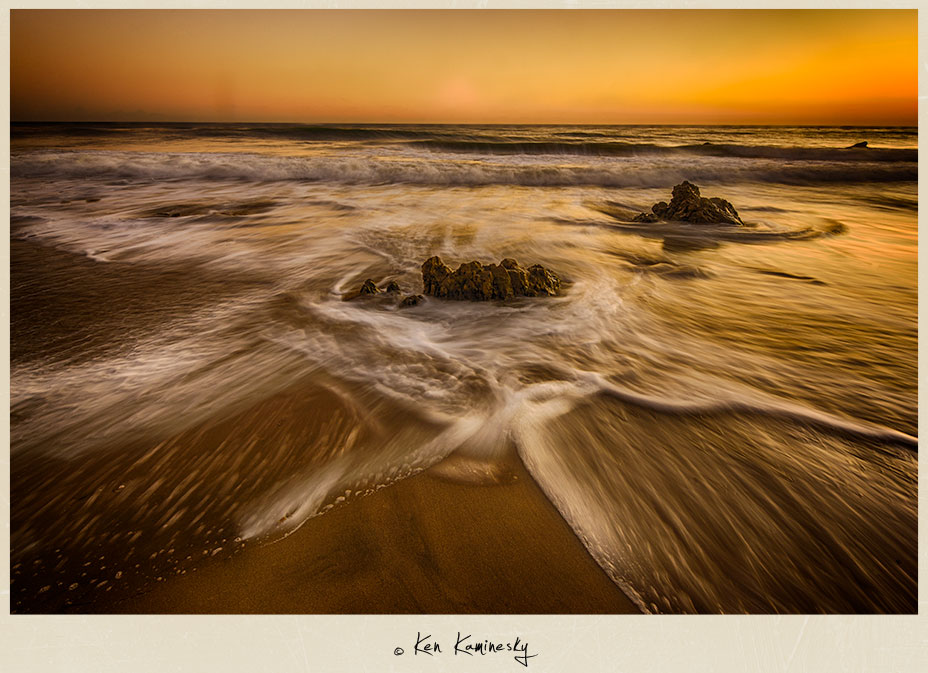 One day and hopefully one day soon, I’ll be able to follow my dream and live somewhere closer to the water, or dare I even imagine that I could live in a beach house? It sure would be nice to be able to watch the sunsets during walks along the waterfront on a regular basis. Ahhh California dreaming! 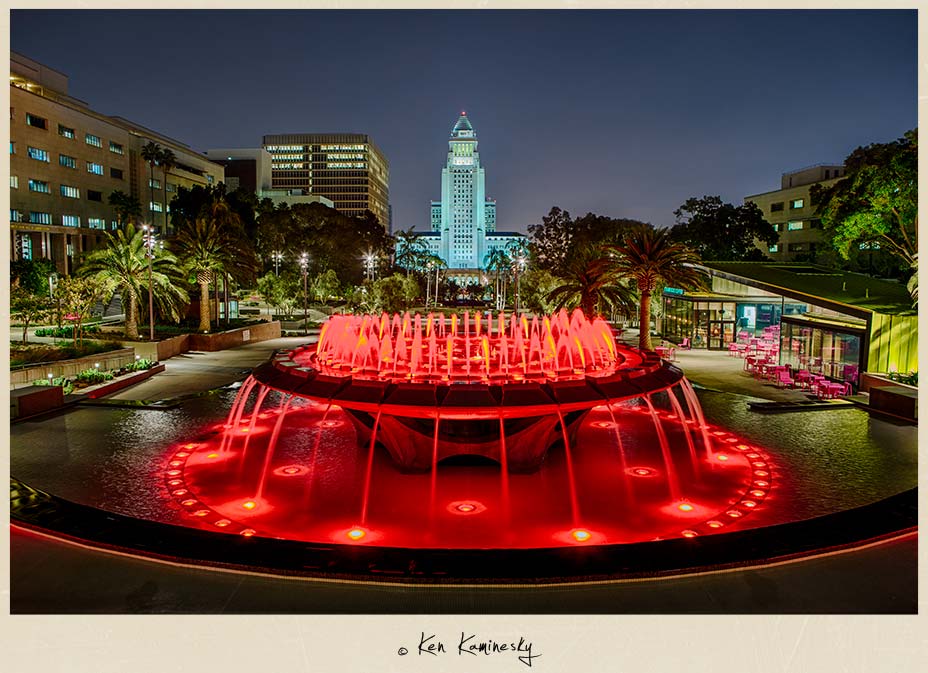 My Art on the Road stop in LA ended that evening with a nighttime walk around downtown as I always like the way a city takes on a new look at night. I always have a great time in Los Angeles and this was perhaps my best trip to California to date. It wasn’t my first visit here and most certainly not the last. Nine cities down, one to go! See you soon Miami, I hear you have some beaches too ;)