Art on the Road: Minneapolis

“No great artist ever sees things as they really are. If he did, he would cease to be an artist.“

It was a perfect autumn day as I woke up on my first morning in Minneapolis. The air was crisp and the colours of the trees were those gorgeous warm toned yellows, reds, and oranges. The conditions were ideal for my portrait session with noted Native American artist Carolyn Lee Anderson. 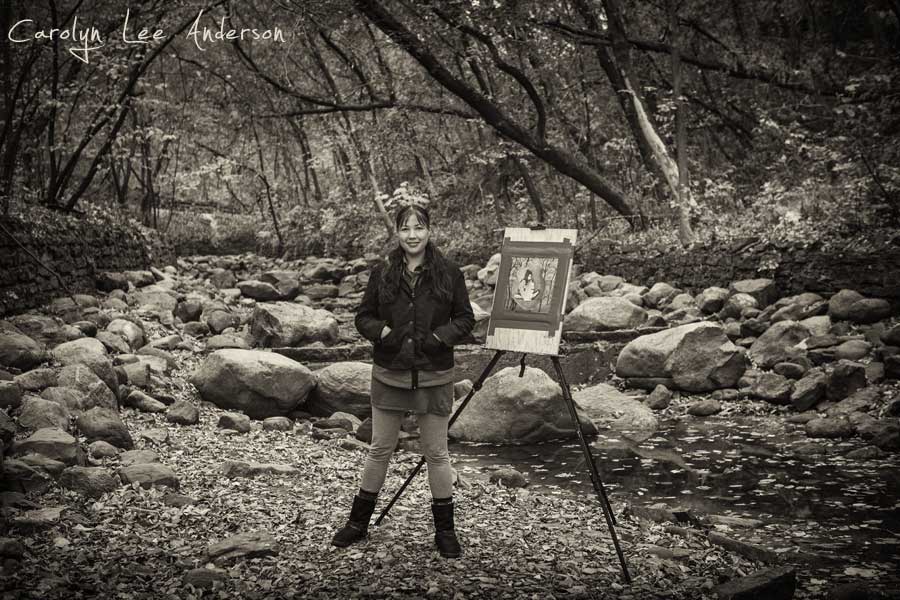 I arrived at Minehaha park early in order to scout the location that I had in mind; Minehaha falls would make a superb backdrop for the shoot. Little did I know that Minnesota had been in drought conditions this summer and that the park wardens have the control to turn on and off the waterfalls at their discretion. The waterfall had been transformed into a water trickle so we had to make do with the unfortunate circumstances. 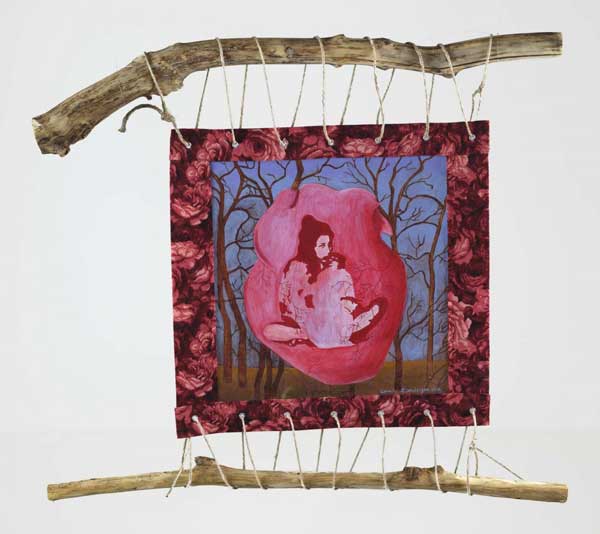 With the falls turned off this gave me a chance to take a leisurely stroll with Anderson in search of where we would do the photo shoot and was the ideal opportunity to talk with her about her art and what inspires her to create her unique multimedia pieces that incorporate acrylic painting, Navajo weaving, patterned fabrics, and natural elements. What a wonderfully original combination of ingredients! 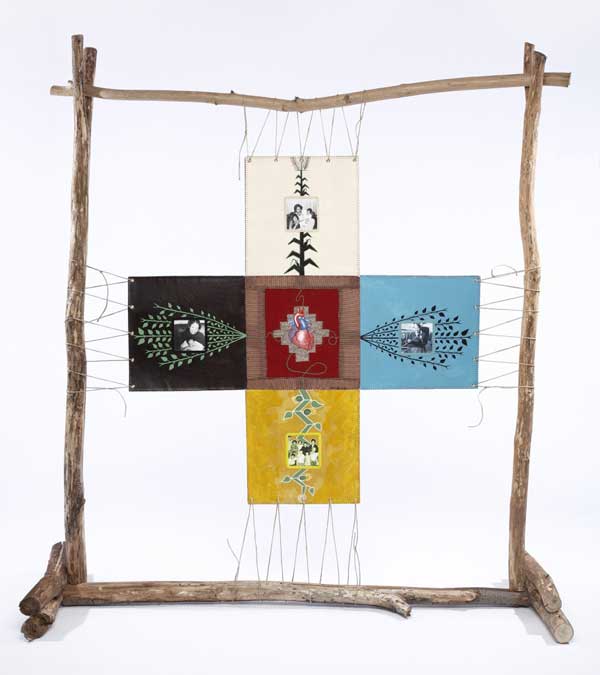 Thanks to the lack of water falling at Minehaha Falls the river had run dry as well. This made for a beautiful setting for the portrait and once again something that began as a bit of a let-down turned into a wonderful opportunity. After all, lots of people have photos of the falls but how many actually have had the chance to have their portrait taken in the dry riverbed? Ahhh… Serendipity. 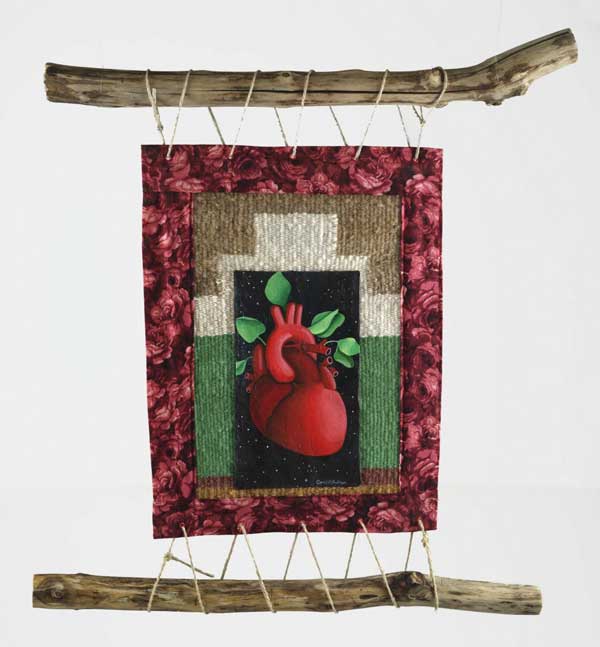 Not only does Anderson paint from the heart, she also actually paints the heart itself as you can see in the above examples. Her art is in a big way a tribute to her family and her ancestors who as she says: “I consider how my body and personality are the accumulating effects of my ancestors—their blood, stories, joys and struggles. I consider my place in the world and how the thread of my family’s story is a part of a much grander tapestry that was created and is sustained by the forces of nature.” 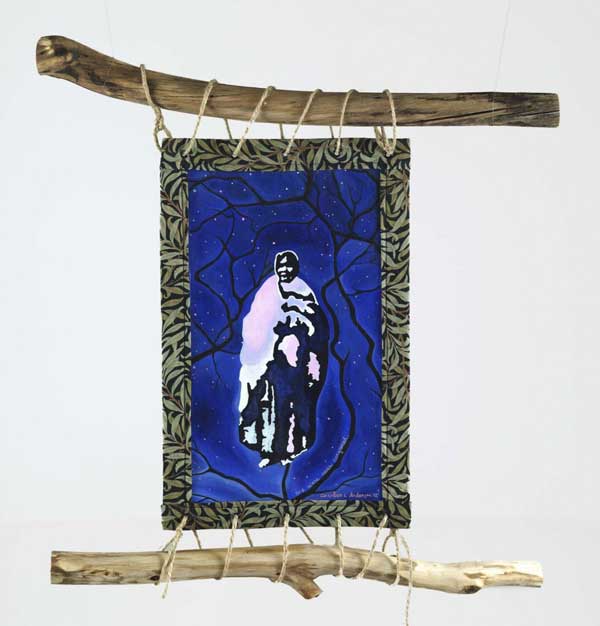 The women in Anderson’s life have had a deep effect on her personally. She spent much of the time talking about her beloved sister who passed away several years ago as well as her grandmother who just recently had to give up her own weaving due to her hands not being able to deal with the tools any longer. It’s nice to see the traditional art form passed down from generation to generation. These strong women are well represented in Anderson’s most recent work entitled Shijéí/My Heart.

To see where Anderson’s next gallery show will be, please check her website: http://carolynleeanderson.com 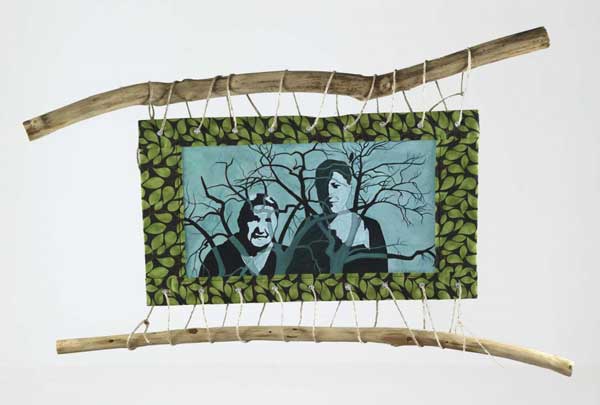 We ended our talk and portrait session with the photo of Anderson next to a beautiful red leafed tree. I liked the natural element of wood in her recent work and thought that the tree was a fitting ingredient in her portrait. 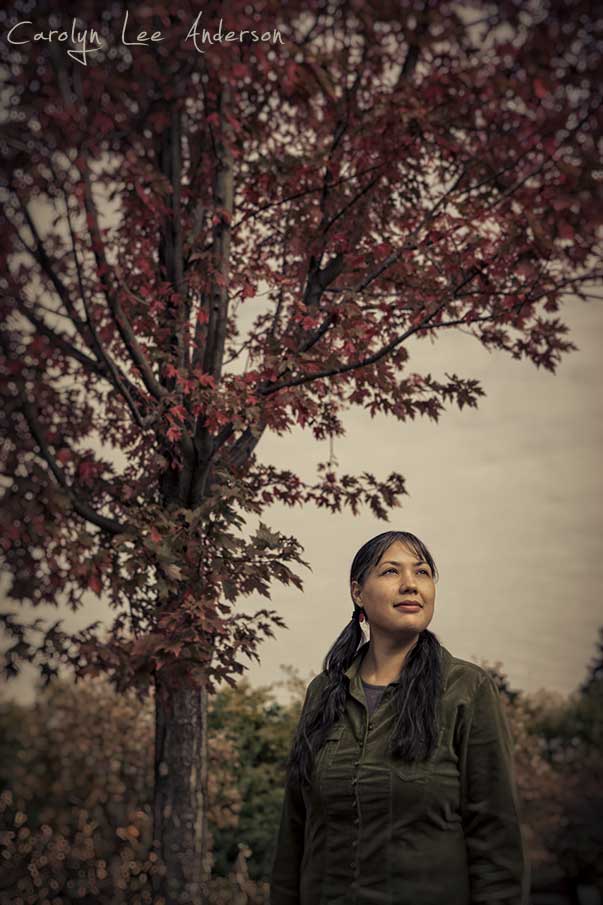 Fortunately for me Anderson agreed to join me for a late breakfast and offered to accompany me as I continued on my quest to seek out Native American art in Minneapolis and St. Paul. 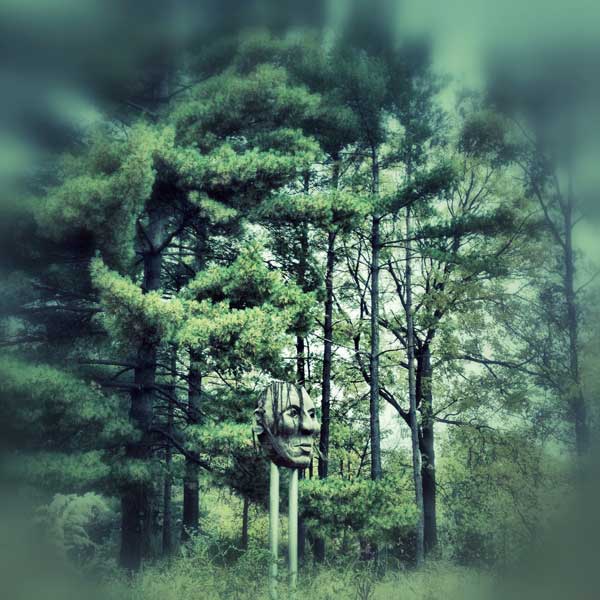 I’m sure glad she did, and you’ll see why in the photos below. 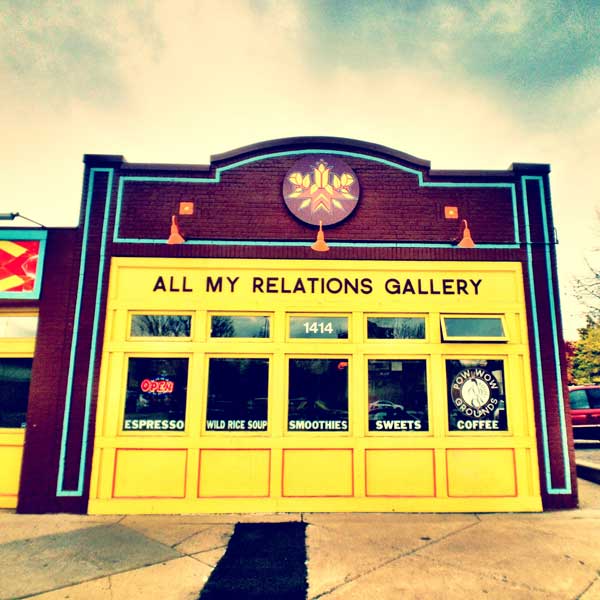 We began by heading to the American Indian Cultural Corridor which is the centre of Native American culture in Minneapolis. Our first stop was the All My Relations Gallery and coffee shop which regularly features Native American art. In fact Anderson herself just recently had a show there and we just missed another one that was being transferred to the James J. Hill House Gallery in St. Paul. 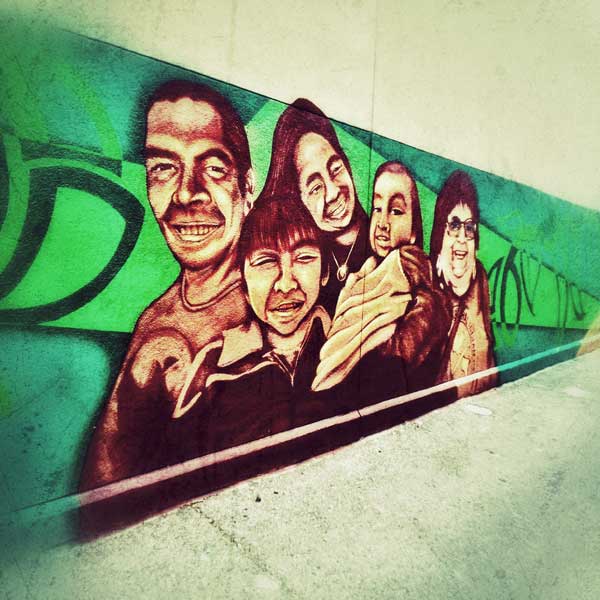 At the gallery we were given some pointers as to where we could find some of the best examples of Native American art on public display and the search began around the corner with some striking murals by well known local artist Bobby Wilson. 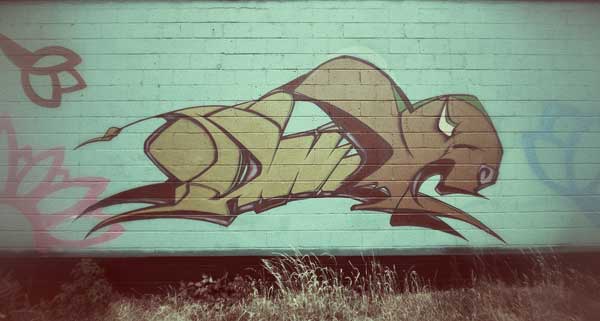 This was just the beginning of my exploration of the native art scene in Minneapolis and we moved on to discover more incredible art; this time at a nearby school. The “Project of Hope” on the facade of the Nawayee Center School was painted by Francis Yellow and Marilyn Lindstrom with Robert DesJarlait. It is worth driving by to see it in person as photographs do not do it justice. 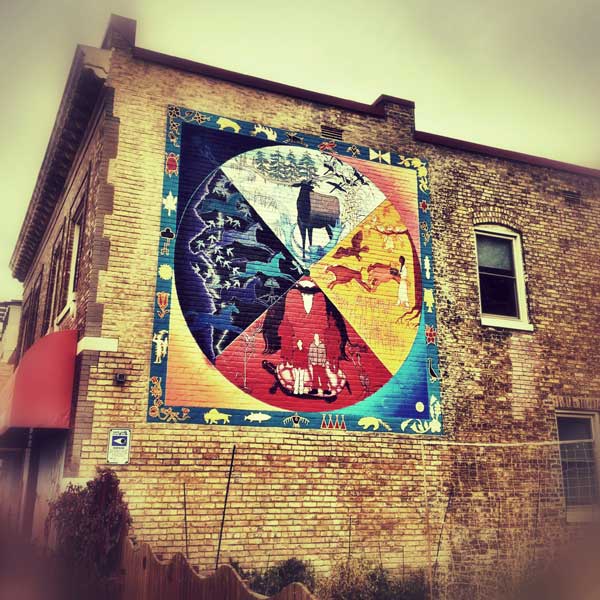 I could tell that this piece resonated deeply with Anderson and in the end I’d have to say that it was my favourite mural that I saw in my brief stay in Minneapolis.The colours and details of the painting are quite breathtaking and even the rawness of the brick background and surrounding area add a powerful urban element to the art. I also loved the fact that this was painted on a school and that children are being exposed to beautiful art on a daily basis. 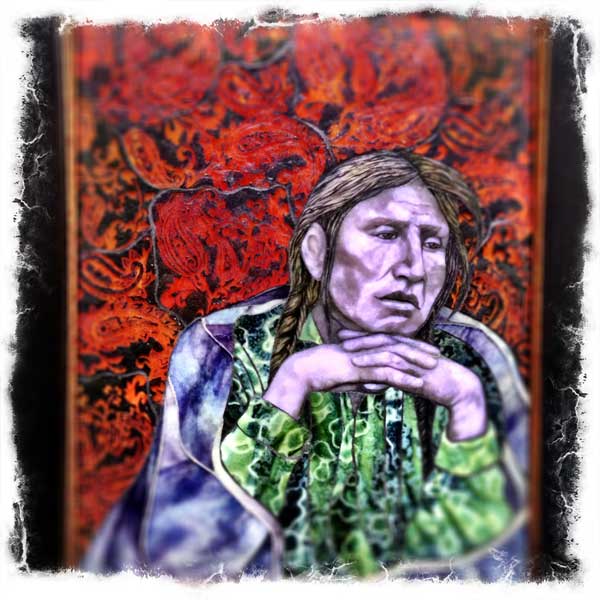 We ended our time together by visiting the James J. Hill House Gallery in St. Paul where we had hoped to see the art exhibit by Native American artists reflecting on the 150th anniversary of the U.S.-Dakota War of 1862. While they were just installing the exhibit, we were given special permission to get a sneak preview. 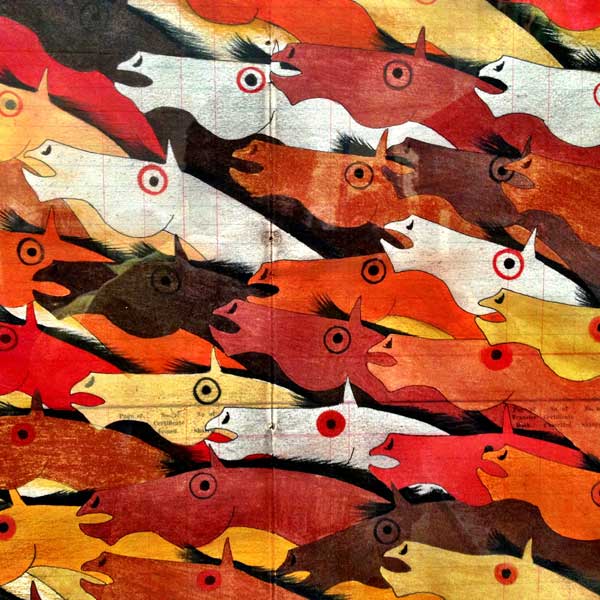 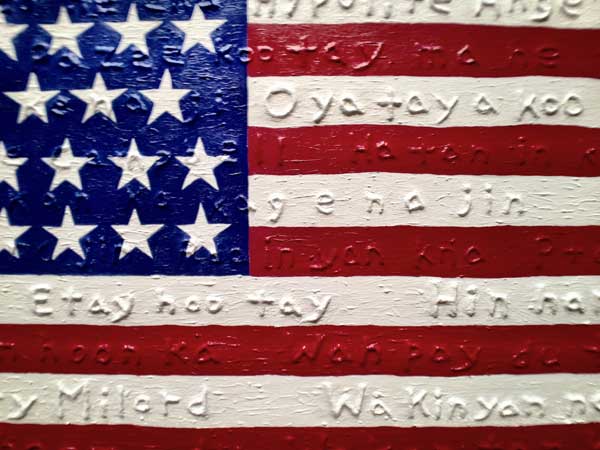 The art at the Dakota war exhibit had an effect on me and I was once again reminded about the value of art as an education and motivational tool. on this day I most certainly learned a lot about North American history and I was motivated to learn more. 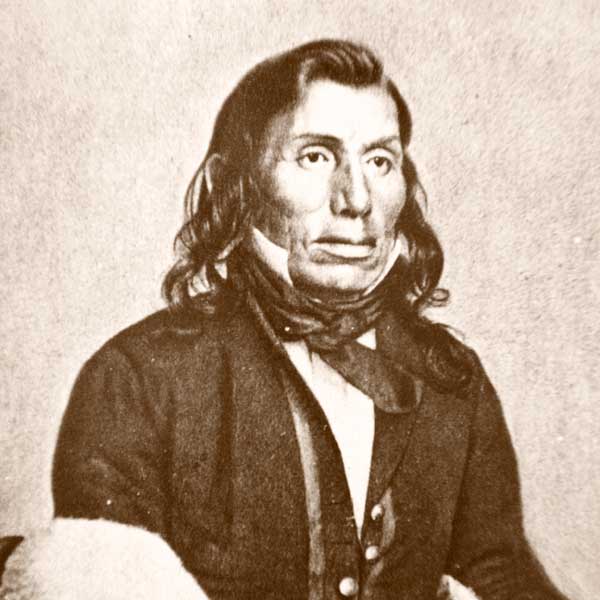 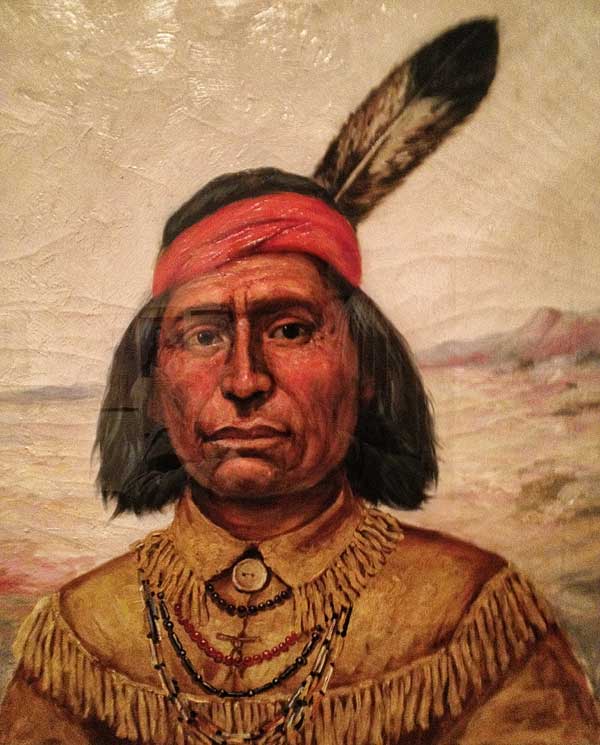 I was reminded about how powerful a tool art can be. Whether it’s photography or painting, art can be used to educate us on historic events in a way that writing just can’t do. Seeing the reality of the situation through a photo or painting can strike a chord in us and place us directly at the location of an incredible historic event such as the Dakota War. As I meandered through the exhibit, I read as much as I could but it was really the art that touched me the most. Seeing the imagery made me want to read more and educate myself of a subject that I knew little about and I was grateful to have had the opportunity to learn so much in such a brief time. 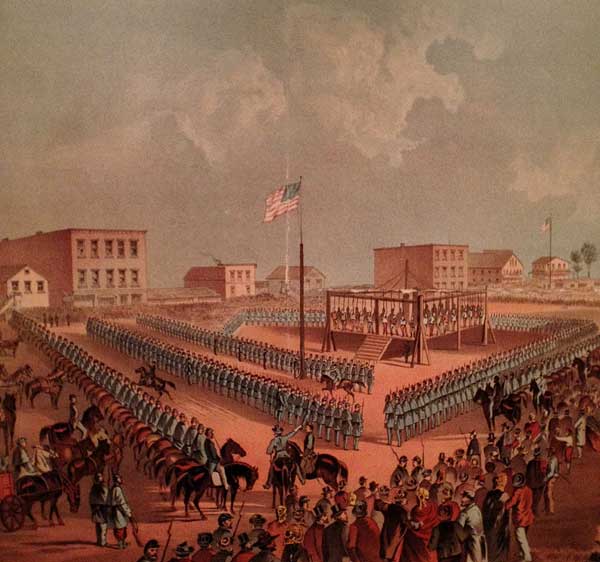 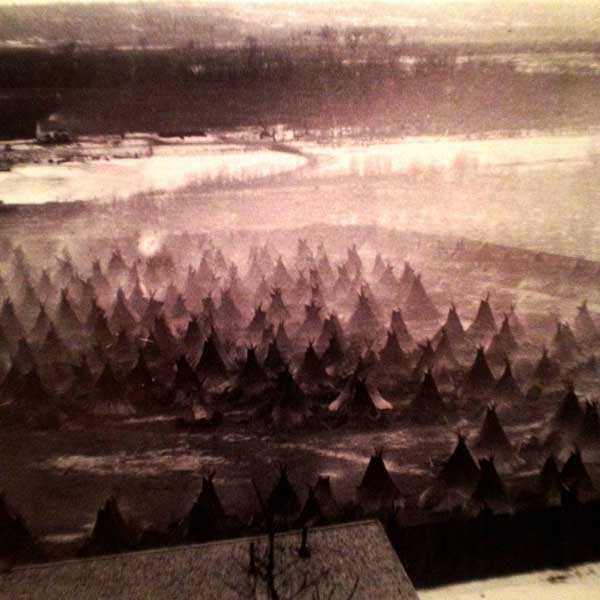 The photo of the internment camp above has a particularly haunting feel to it and reminds me once again of the significance that photography has played in documenting history for close to two hundred years now. Imagine if photography had been around during the time of the Egyptian Pharaohs, the Roman Empire, the Mayan civilization, or the ancient Chinese dynasties. Oh how much we could have learned if this had been possible. 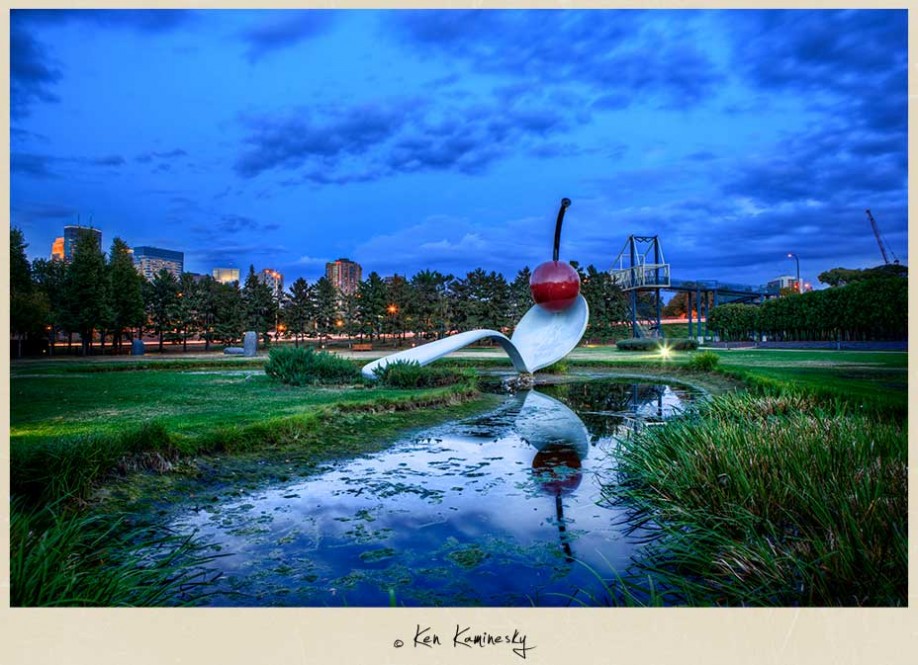 I spent the remainder of the day bouncing around from other Native American art on public display to seeing some of the sights in the city, including other forms of art like the famous “Spoon Bridge and Cherry”. 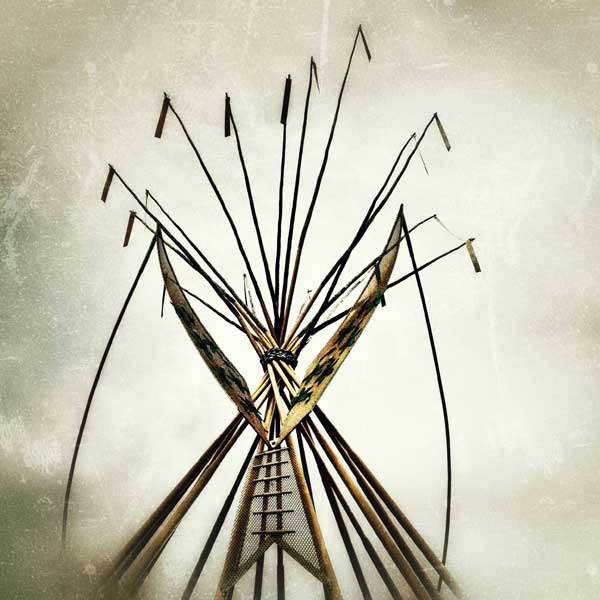 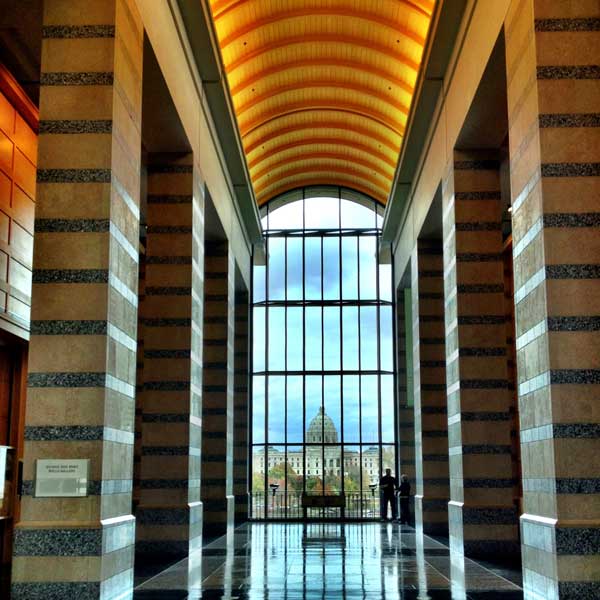 I had a great time in Minneapolis, next stop Las Cruces! 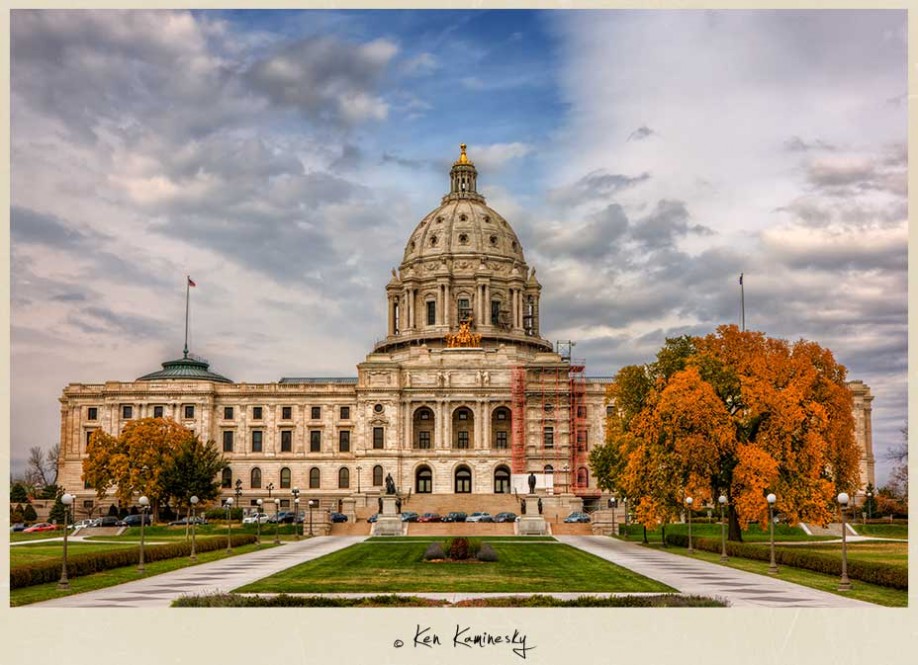