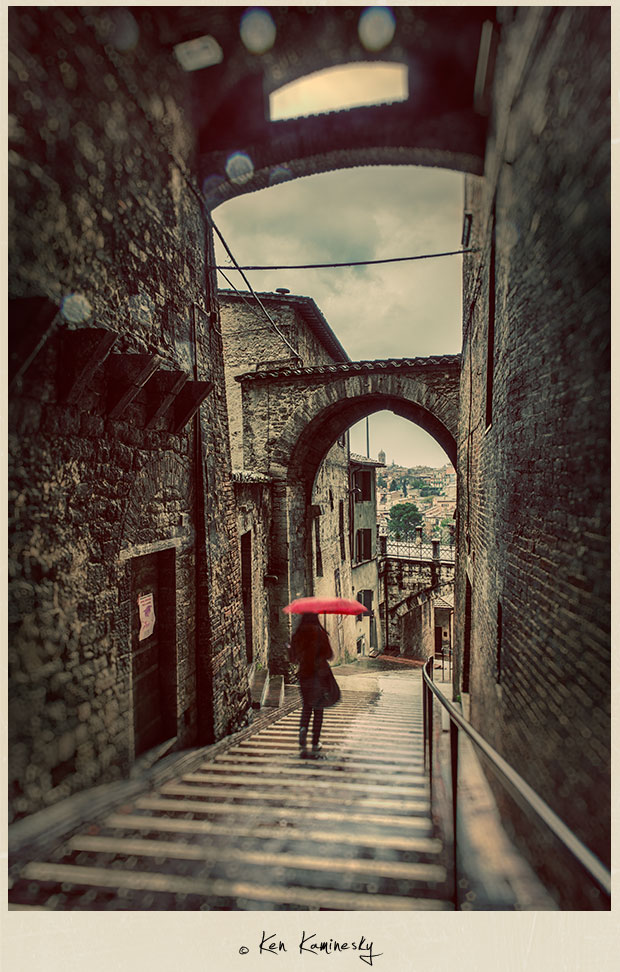 Interesting how things just happen at the right time. I bet you’ve had one (or many) moments in your life where you were thinking of someone that you haven’t seen in a long time and… Voila! The phone rings and on the other end is the person you were thinking of. This is kind of like that with a photographic twist.

As I was working on my 2012 retrospective blog post I came across one of my favourite images from my time in Umbria.

The back story: I was location scouting for my mini workshop in Perugia and as luck would have it, it began to rain. I don’t mean bad luck either, after all it was mid-day and if there had been no clouds, no rain, I would have had a much less productive day in terms of photography even if it did impede my scouting progress. Things apparently happen for a reason.

Literally, as I was editing this image I received an email from Stella Artois about a cool project titled “Timeless Beauty” that they were working on with superstar photographer Annie Leibovitz. The campaign stars English actor Noah Huntley and Ukrainian model Tanya Ruban.

Check out the behind the scenes look at how the campaign was photographed over at La Societé Stella Artois.

I’m delighted to be collaborating with Stella Artois on this campaign celebrating Timeless Beauty. I was provided with an inspiration board that epitomized timeless beauty and was then tasked to share an image that best interpreted that vision. This image from Italy immediately came to mind when thinking of the theme I was given. Italy to me is the epitome of Timeless Beauty. So much culture, history, and style are to be discovered everywhere you look in this magical country, so to me this was a perfect fit for the location.

There is also something timeless about the anonymous woman with the red umbrella in the scene. She is every woman and every woman has an innate beauty within her. The last piece of the puzzle was the rain. I find rain to be so romantic and it always adds a special beauty to photographs of historic towns and cities.

My ‘Timeless Beauty’ image will be exhibited alongside the Annie Leibovitz campaign, which is being unveiled at the 2013 Sundance Film Festival on January 18, 2013.  Following the unveiling, the images will also be available on La Societé Stella Artois and on the Stella Artois Facebook page. Up to the minute updates can be found on Stella’s Twitter feed.

Stella Artois is an official sponsor of the Sundance Film Festival and has been since 2004.  This year, Stella Artois will host numerous events at the Village at the Lift. Look for these events at  the Stella Artois Café, the Engraving Room, the Cutting Room at Tao and Studio Stella Artois.

In the coming months Stella will continue to celebrate Timeless Beauty through a series of initiatives.

Now if you’ll excuse me, I think it’s time to go have a Stella and watch a movie. That’s my initiative for the moment.

« Top Ten Instagram photos of 2012
Art on the Road: Minneapolis »