Art on the Road: Chicago
Like most travellers who live in North America I had been to Chicago countless times before this trip and like most of those travellers I had only been to O’Hare airport and never actually ventured into the city itself. O’Hare is the second busiest airport in the world and has been voted  the “Best Airport in North America” for the last ten years in a row by the readers of the U.S. Edition of Business Traveler Magazine (1998–2003) and Global Traveler Magazine (2004–2007). Like these well travelled readers, my impressions of the airport are extremely positive and after this first trip into the city I can say with conviction that those impressions are mirrored for Chicago in general. 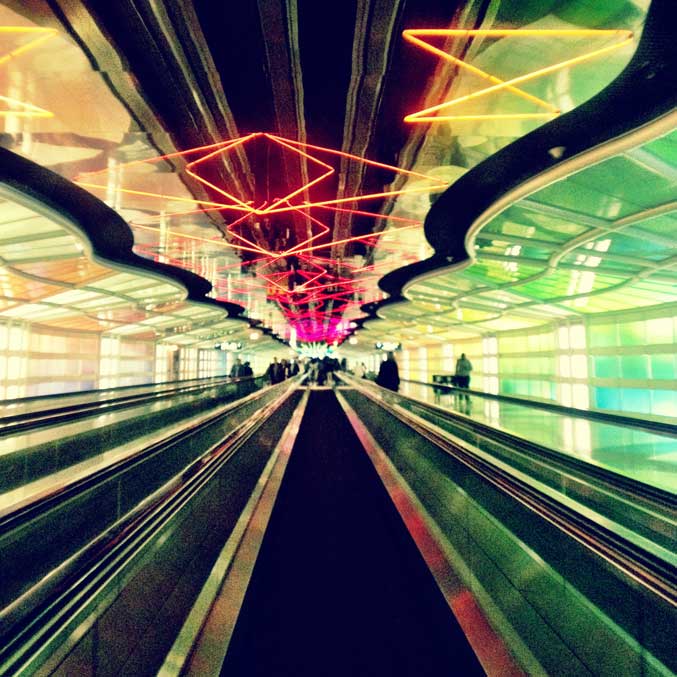 From the moment I arrived at my hotel smack dab in the heart of downtown Chicago I was blown away with the sights. The view from my window was a spectacular feast for the eyes of a fan of architecture. 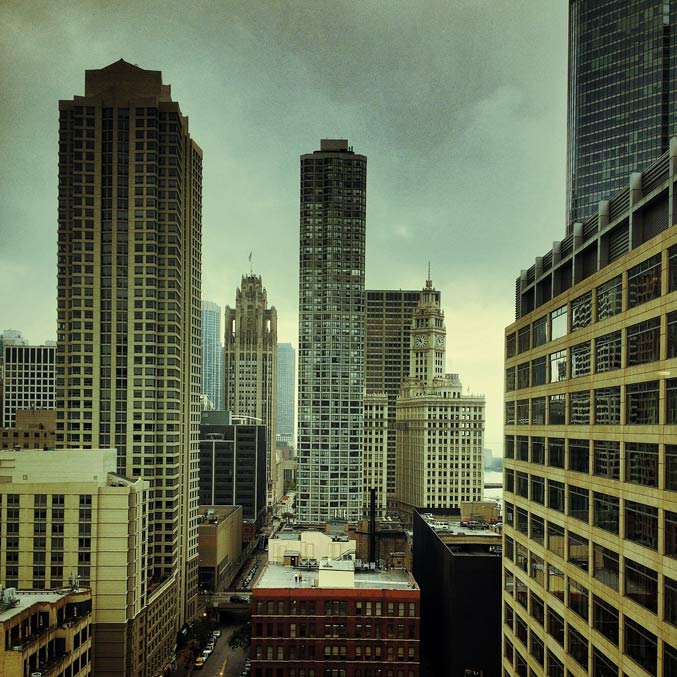 The view from my room

After seeing so many stunning buildings while driving into the city from the airport and then witnessing the view from my room I knew that the next day’s photo walk with noted Chicago architectural photographer Darris Lee Harris was going to be a great day indeed.

Chicago, Chicago, I’ll show you around…
And show me around he sure did! I met Darris at the crack of dawn at what has become Chicago’s most iconic piece of art. Cloud Gate — or as it is affectionately nick-named The Bean — is a spellbinding abstract sculpture with a mirror like finish that is the centrepiece of AT&T Plaza in Millennium Park. 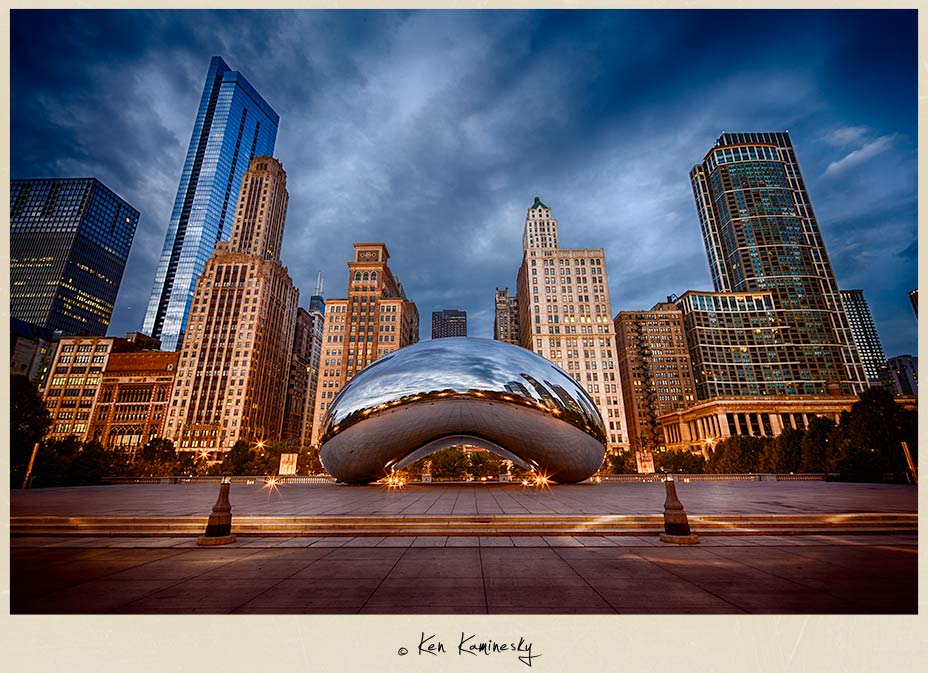 As any travel or architectural photographer knows, there is no better time to photograph an urban location that at sunrise. Who in their right mind wants to get up at 4:30 am to get to the designated location just before the sun — or as I like to call it The Big Ball of Fire in Sky — starts to creep up over the horizon and bathe the world in that perfect morning sunshine? Me… and apparently Darris too! 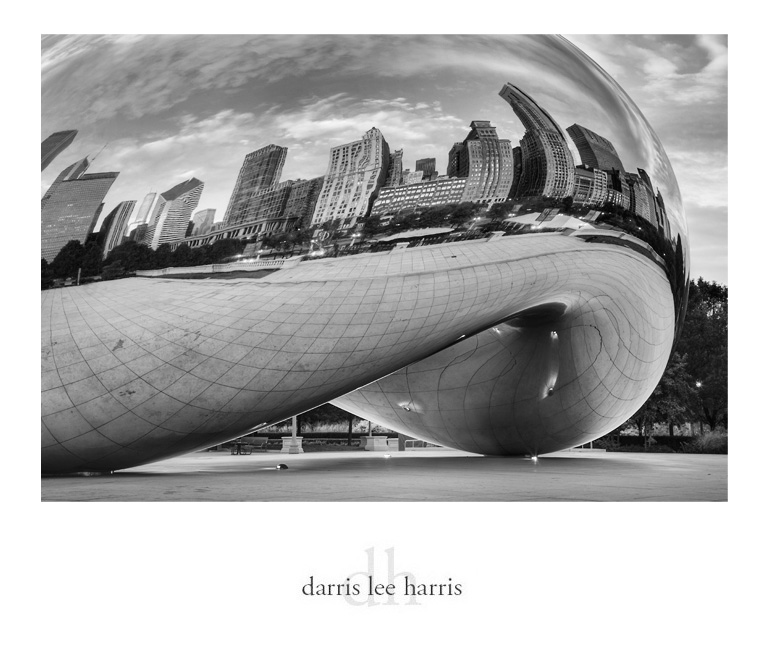 It is so nice to get the chance to collaborate with peers who have such wonderful vision. Darris’ photography impressed me from the moment I saw his website and to be able to spend the day exploring Chicago as seen through the eyes of a master photographer made my time in Chicago incredibly special. 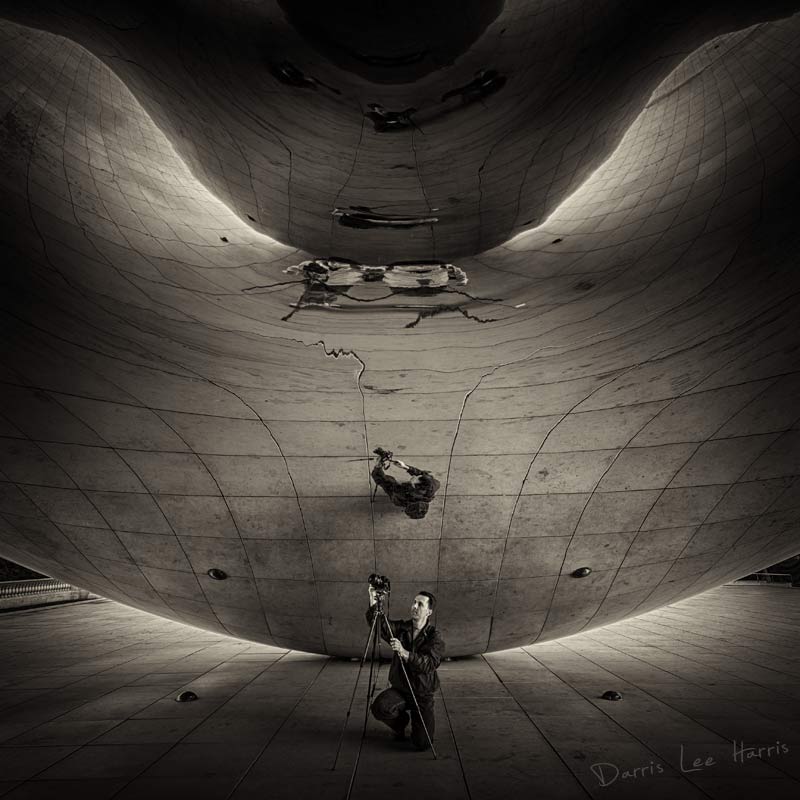 I could have honestly spent the whole day just getting interesting images of Cloud Gate but the city was waiting to be discovered and we moved on from our first location to an architectural delight by my favourite Canadian architect Frank Gehry. Jay Pritzker Pavilion is an outdoor bandshell with seating for up to 11,000 people and it is done in typical Gehry fashion. The metallic curves that he is so well known for are ever-present in this design as well and no matter where you stand to gaze upon this masterpiece of 21st century architecture you will find a photographic opportunity. 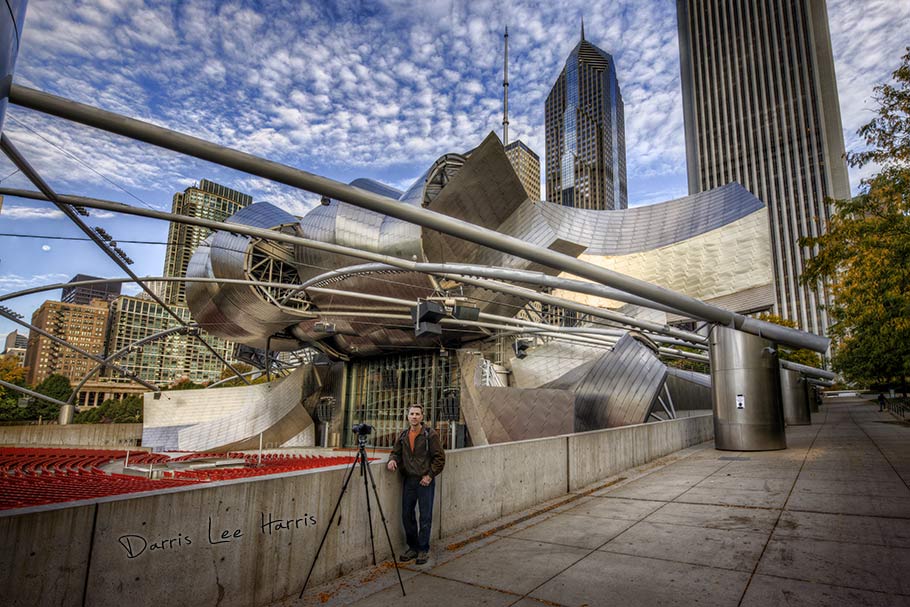 This is one blog post where I could do nothing but post the photos that Darris and I took and let the reader just drool over the sights that I am so fortunate to see during my travels. Chicago represents the epitome of 20th Century North American architecture and two days is just not enough time for a photographer to spend in such a classic location. Thanks to Darris, I was able to make extremely good use of my time and in the course of the day we had the opportunity to talk about all things relating to photography, the city, architecture, and much more, all while having a grand time taking photos. 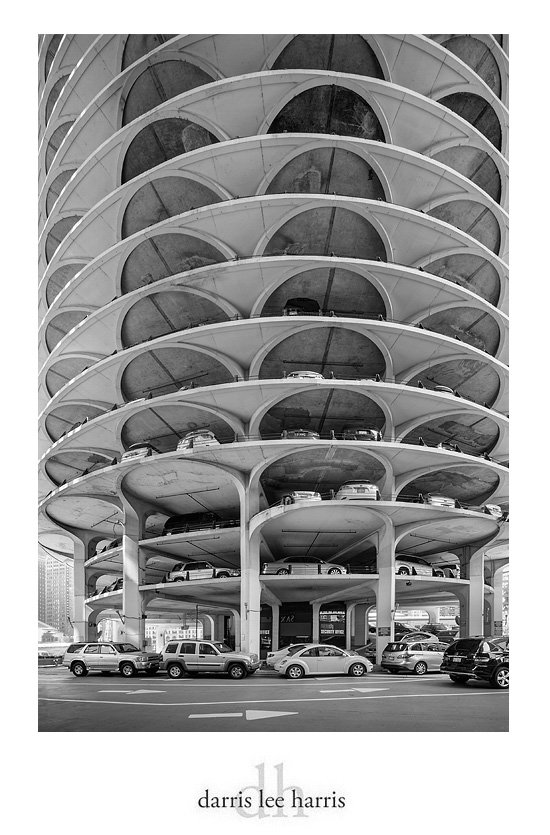 After lunch we continued exploring downtown Chicago, moved on to the Magnificent Mile, and continued to photograph some of the most iconic buildings in the country. One of my favorite stops was Marina City designed by architect Bertrand Goldberg. At the time of their construction in 1964 these 65 story corncob-shaped buildings were the tallest residential buildings in the world. Marina city is not just the two unique concrete towers but a series of buildings that were conceived to be somewhat of a city within a city. Some of the original buildings and facilities they housed included a theatre, ice rink, several stores, a gym, restaurants, a bowling alley an of course… A marina. 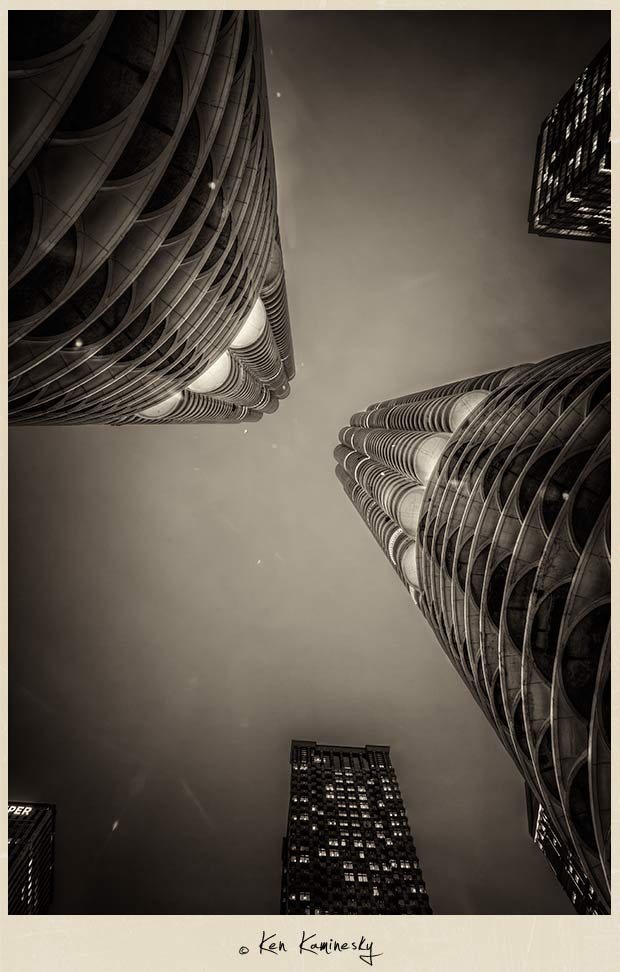 Lucky for me that the SpringHill Suites I was staying at was located just a couple of blocks away from Marina City and I was able to get back there at night to get another perspective of the towers on my second night in town. I managed to get there just after nightfall and I walked into the parking lot adjacent to the House of Blues which is now a permanent landmark at the foot of the towers. I noticed that there were several parking lot attendants that noticed me and I was sure that one of them was bound to approach me and ask me to leave. This happens all the time to travel photographers and I’m used to it by now. Sometimes people can be extremely rude about it and at other time — like this time — I was very pleasantly surprised to see just how polite and courteous some people can be.

Not only was I not asked to leave but the attendant who finally did approach me seemed more concerned for my safety than why I was taking photos. He asked me to move away from where there would be cars passing by just to be safe and was happy to let me install my tripod between a couple of cars well away from any possible traffic. This was an experience that was repeated time and time again in Chicago. People were extremely polite and more often than not willing to grant me access to private property in order to take photos. This kind of thing does not happen very often and I will always remember the people of Chicago fondly because of their laid back and respectful demeanour. 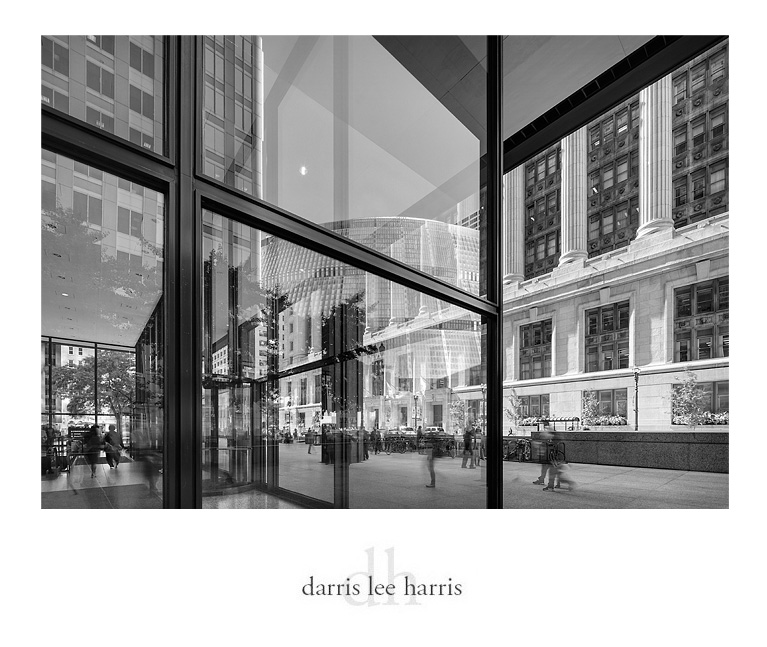 Even the security guards were considerate during my photo walk with Darris. Inside the glass building in the photo above that Darris took there was some sort of security station and Darris shot me a knowing look as we started to set up our tripods. We both knew that it would only be a matter of time before we were asked to leave. To our mutual surprise the guards that did approach us in the end were almost apologetic about asking us to not point the cameras at the security station which is situated off camera to the left. I’m happy to say that Chicago is now what I’d consider to be one of the most photographer friendly cities I’ve been to and I am looking forward to returning sometime soon to continue my photographic architectural investigation.

After Darris took that photo above he showed me exactly what he was seeing that he liked so much. If you look closely there is not one single building that is the main focus of the photo. There are in fact four distinct buildings that make up the image and each one is quite different from the other. The glass an steel of the building to the left is quite typical of 1950s type Chicago Architecture that is inspired from the genius of architect Mies van Der Rohe who played an integral part in the design of Chicago’s skyline in his 31 years of work in the city. Each of the other buildings represent their own unique style as well and together they blend in to make one heck of a beautiful photo. The building in the reflection of the glass adds the nicest subtle touch and the cherry on top is the incognito pedestrians that add a bit of life to the shot. 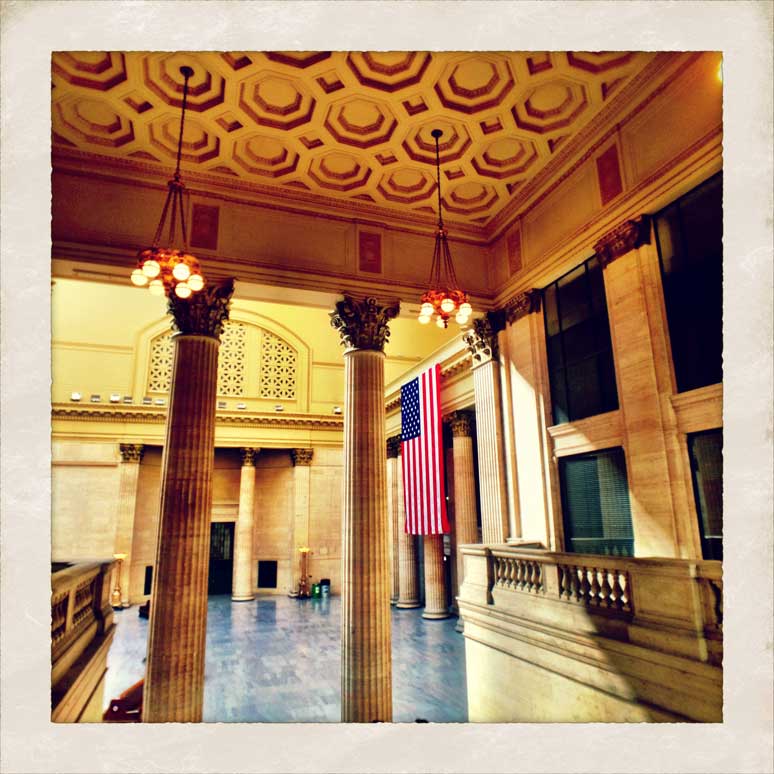 After a couple more stops to the remarkably quiet Chicago Union Station pictured in the above iPhone photo and the Chicago Cultural Center which is home to the worlds largest Tiffany dome, I said thank you and goodbye to my new friend Darris. Perhaps the very best part of doing the Art on the Road tour is meeting so many talented artists who’s company I get to share for a few hours. Each one has opened my eyes to some new type of art and a new way of seeing the world through their eyes. That is what art is all about! 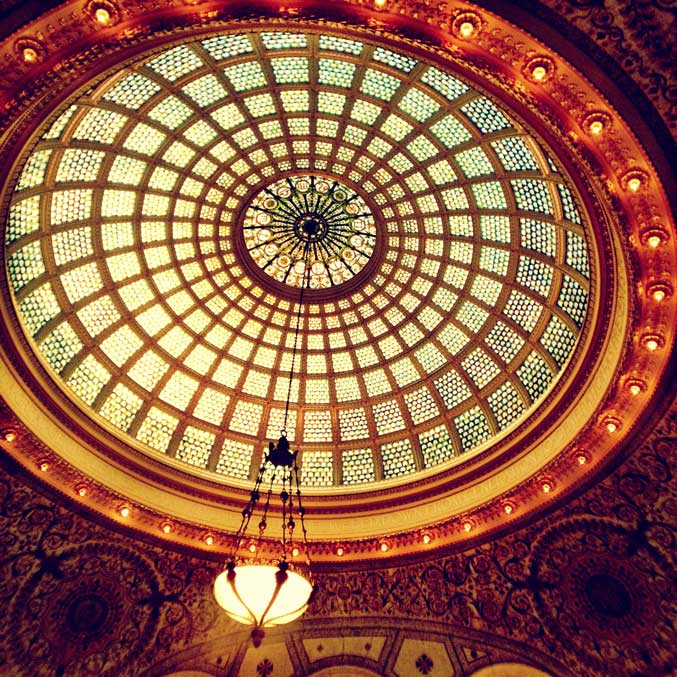 On my second day in the city I continued to search for more of the city’s architectural treasures and in between bouts of rain I was able to get a second shot at Marina City, The Wrigley building, the new Trump Tower, IBM Plaza, Northwestern University Former Prentice Womens’ Hospital, Wrigley Field, The John Hancock Center and so much more! 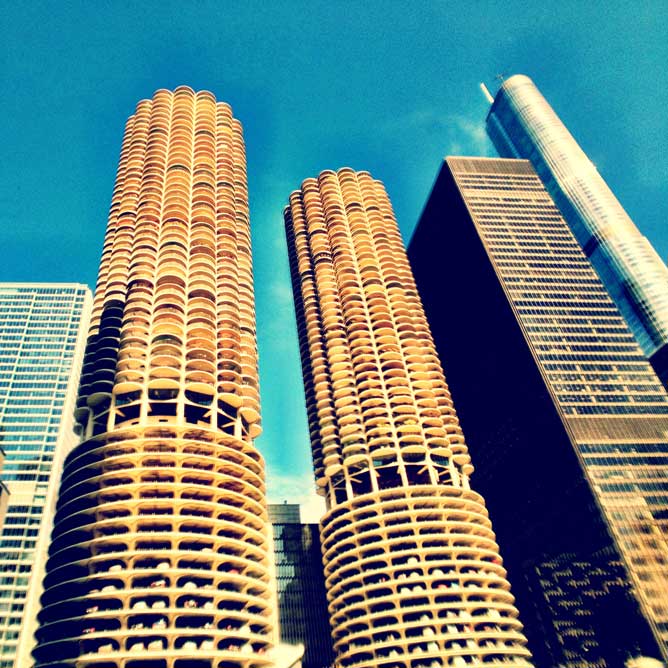 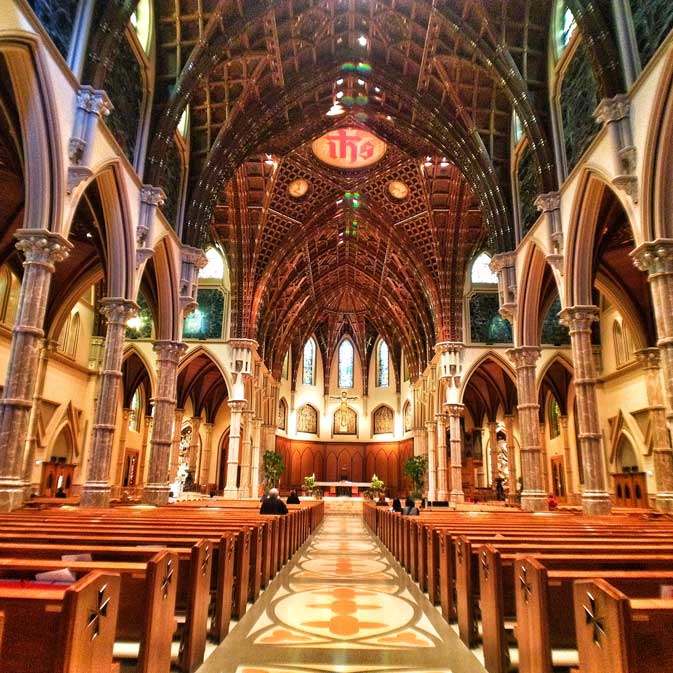 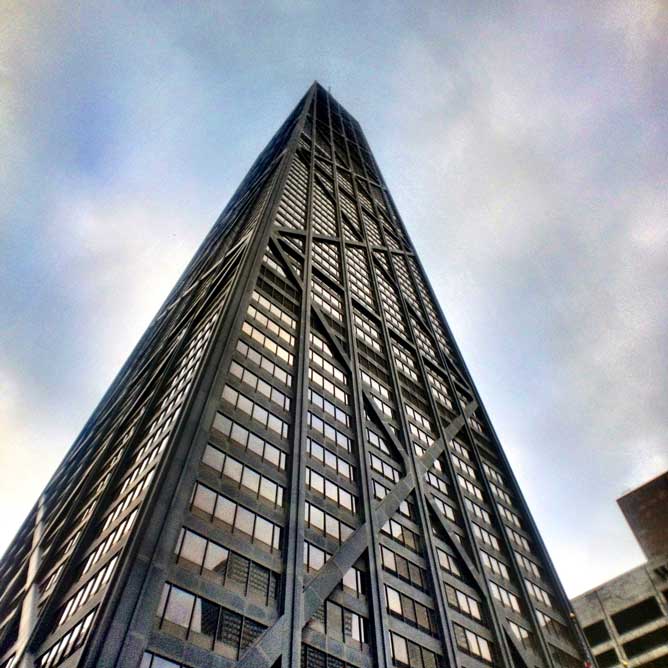 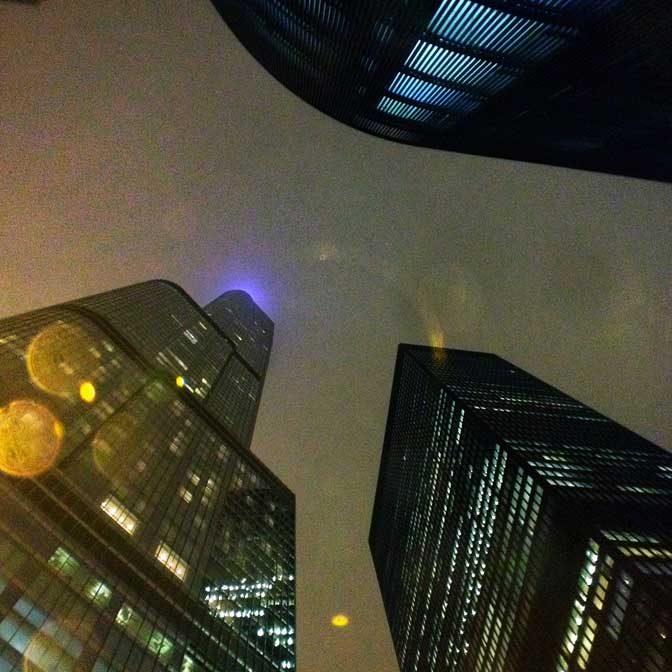 It will take me quite some time to get all the photos edited and I’ll be sure to have several other blog posts in the future about my visit to Chicago. I hope that seeing some of what inspired me while I was in the Windy City also will inspire you to take a trip to this beautiful place and spend some time admiring all the wonderful architecture that makes Chicago the magical place it is.

The day ended with a a last shot at dusk with a perfect pink and blue sky complimented so nicely by the amber glow of the lights that bathe the skyscrapers in the evening. It was then just a short walk back to the hotel and a good night’s sleep filled with dreams of bright lights in the big city. 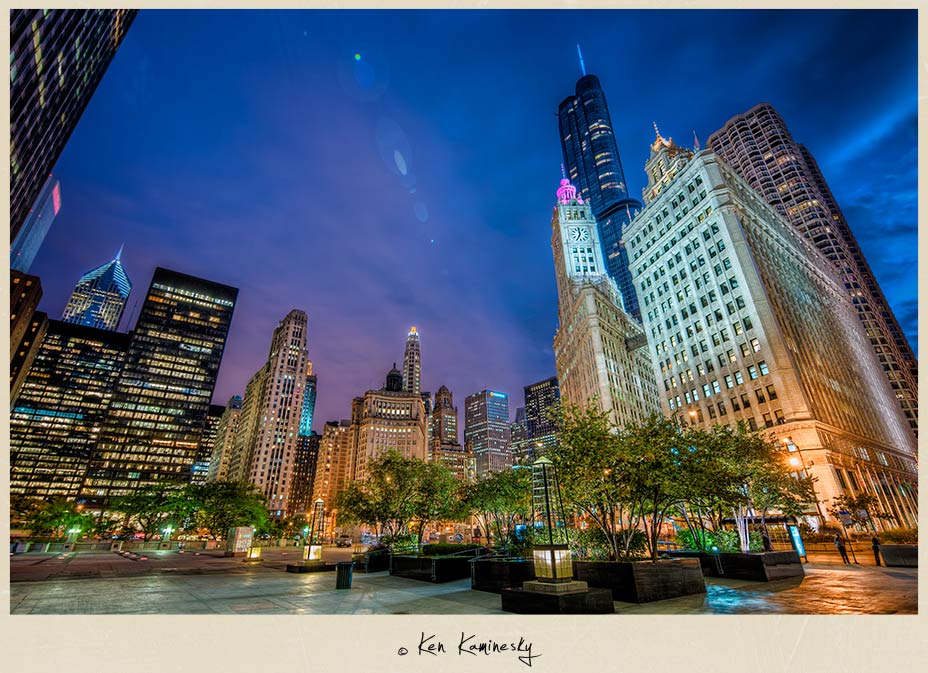