Inspired by Iceland | A photographic journey into beauty

“Heaven is under our feet as well as over our heads.”

What can you say about the most beautiful place on earth? A lot actually. Photos do a good job on their own and especially when given the opportunity to be in photographic heaven for two whole weeks. This is why I’m titling this post: Inspired by Iceland | A photographic journey into beauty.

While the trip began on a sour note, it was far more full of uplifting and inspiring moments than pitfalls. I loved Iceland and I think you will too. 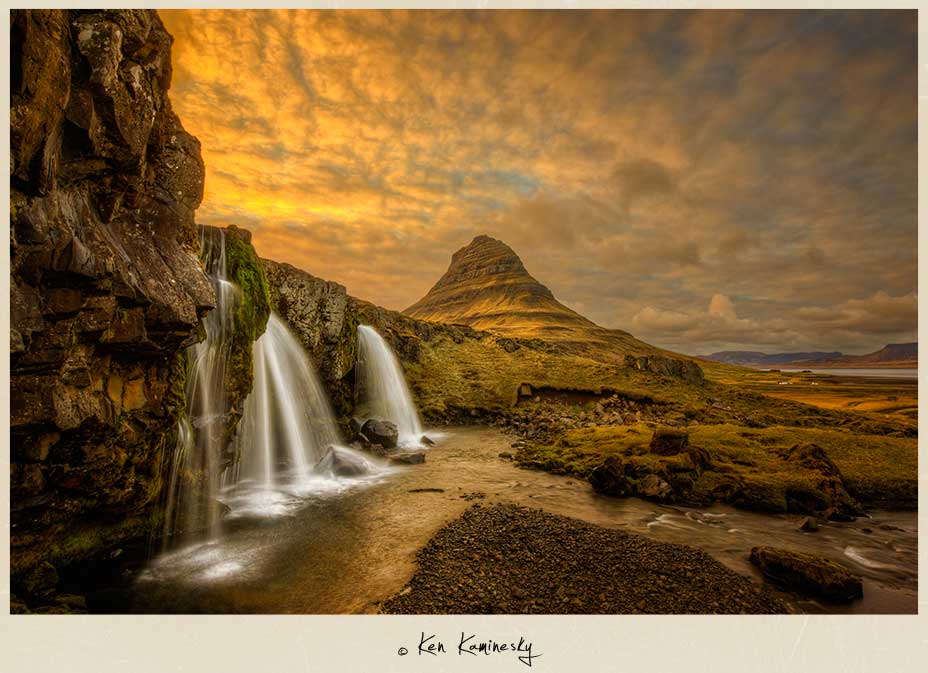 This was the very first time that I embarked on a shoot of this nature with other photographers and I was really excited at the prospect of spending some time with a couple of friends whose photography I really love. We had been planning this trip for months along with our masterful trip planner Susanna from Iceland is Hot. Susanna made sure that we had all the info we needed and she helped us plot our destinations with maps, hotels, camper van, outdoor gear rentals, and a whole series of information sheets.

So here we were, the three amigos… In Iceland! All of us eager to get started upon arrival and as we were waiting for our bags the grins on our faces were getting bigger. Waiting, waiting, waiting…. Hmmm. Colby got his bags, then Patrick got his. It would only be a few moments till mine appeared, right?

Thanks to Air Canada’s awesome — and when I say awesome I mean truly abysmal — service, my bag had ended up…. Well, somewhere other than Iceland. Well done Air Canada, bravo! My bag was now seeing more of the world than I was — but hey — I did get a free t-shirt out of the deal and a toothbrush that disintegrated after a half dozen strokes. Even when I got home and had to deal with Air Canada personnel in Toronto, they were rude and full of attitude. Given the choice I’d fly just about any other airline at this point and I’d recommend that you do the same. My sister came up with a great slogan for our national airline some time ago: 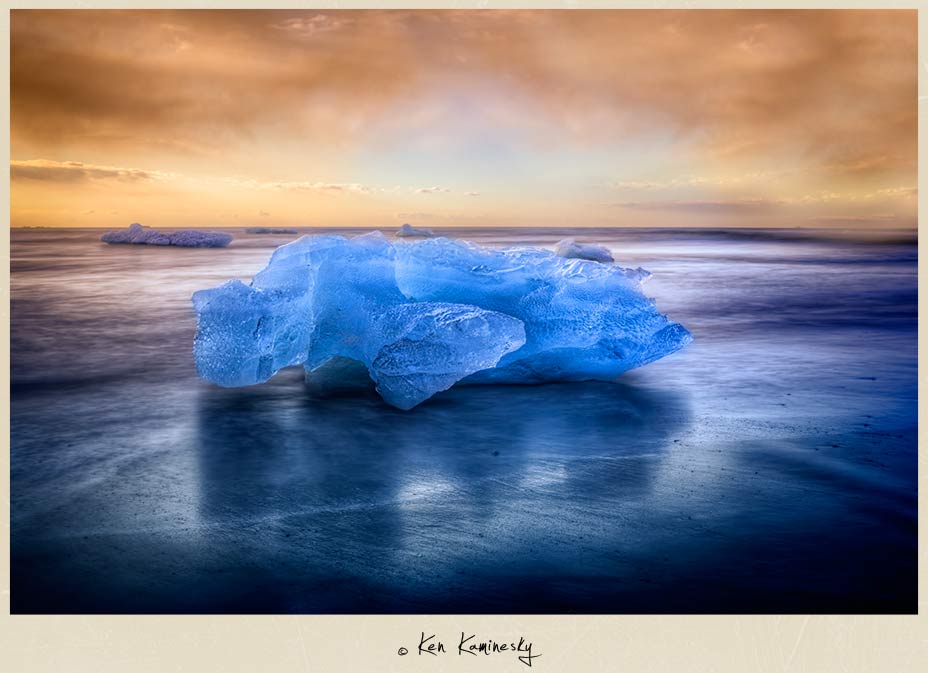 Jokulsarlon Ice at sunrise in Iceland

“I have always depended on the kindness of strangers.”

While the trip was not off to a perfect start, I kept my fingers crossed that we’d get my bag delivered in the next few days. Meanwhile, I was without a tripod, all my clothes and toiletries, computer and camera gear, and a whole bunch of other stuff. The tripod was what concerned me the most since I need it for pretty much all my shots. What to do, what to do?

Social media to the rescue

Thanks to Google+ and the fact that both Colby and Patrick have over a million followers on G+ (which has a thriving photo community) we were able to send out word of my plight. A local Icelandic good samaritan Bergþór Jónsson got in touch with us and was kind enough to lend me his tripod for the entire two weeks! You just have to love how wonderfully giving some people can be. A HUGE thank you toyou Bergþór for turning this minor disaster into a great beginning of my trip. 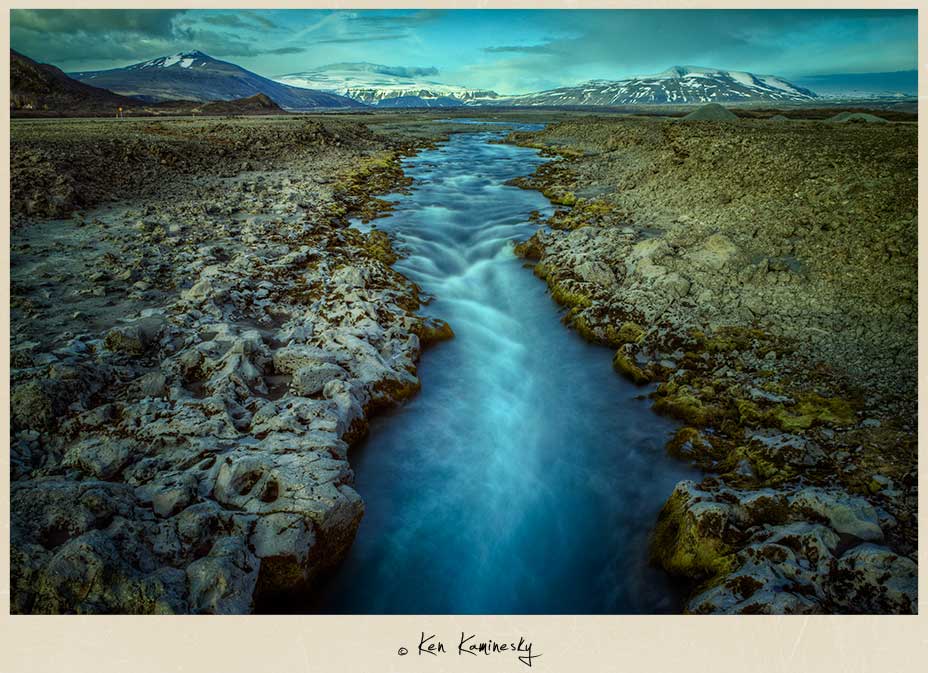 We were all exhausted after the red eye flight to Reykjavik from Toronto and the weather was not looking too promising on the first day. Luckily we had no shooting planned as the plan was to meet up with Susanna to talk about the itinerary and head on over to Happy Campers to pick up our camper van that we’d have for the rest of the journey.

The only way to see the majesty of the landscapes in Iceland is to drive, and there is no better way to drive than by camper van. One of the coolest things for us as photographers, was to be able to park the camper van just about anywhere safe with no extra need for permits. That way we could sleep exactly where we wanted to start shooting the next morning. For a photographer, that is brilliant! Don’t try this in Canada or the US! Our camper was comfortable, efficient, and in pristine condition. We were able to cook in it with great ease and for three people the size was ideal. I’d highly recommend Happy Campers to anyone who was visiting Iceland. When you go see them, tell Sverrir that Ken, Pat, and Colby sent you!

“All you have to do is look straight and see the road, and when you see it, don’t sit looking at it – walk.”

On day two we hit the road and headed towards Vik. The winds were literally gale force and prevented us from going very far that day but we were in for a visual treat at almost every stop we made afterward. As we paused to fuel up the camper and grab a bite (mmm gas station burgers), a police officer stopped us and told us to stop there for the night since the winds were literally sandblasting the vehicles and we could feel ours swerving with each violent gust. At one point we saw some poor guy’s car that was completely matte on one side where the paint had been stripped from the blowing sand. I had never seen such crazy winds this far inland and would later find out that Iceland is the windiest country in the world.

Hope you enjoyed this preview of some of the amazing Icelandic sites that I saw, there’s a lot more on the way. If you’re looking to plan your own trip to this dream destination, there is no one more qualified to help you than Susanna at Iceland is Hot. Our journey was the success that it was thanks to Susanna’s commitment to us and her professionalism. Thanks Susanna :) 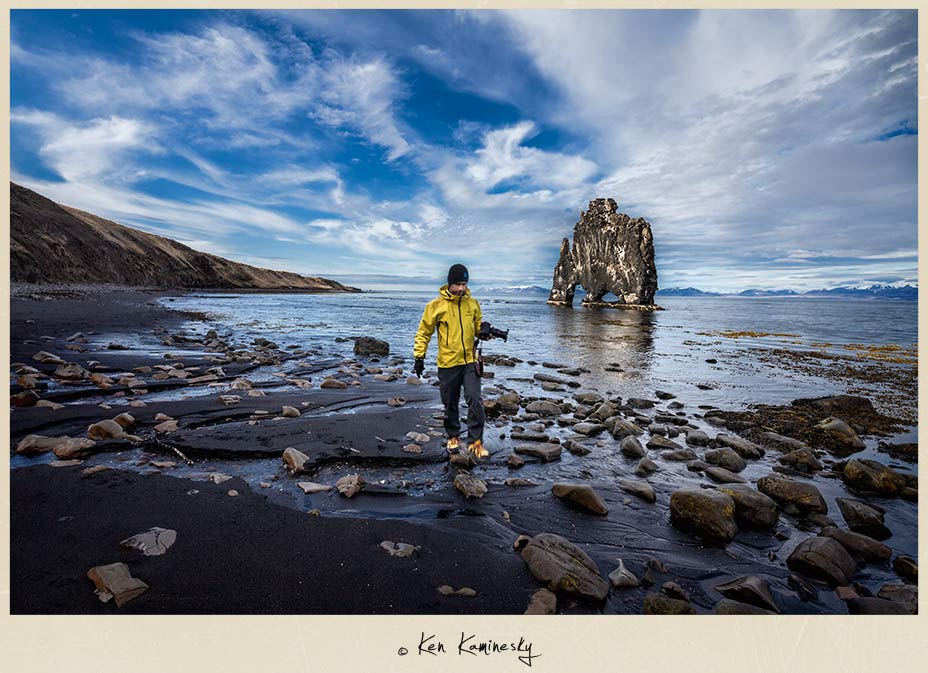 Yours truly at Hvitserkur in my favourite Arc’teryx jacket

“An artist’s duty is rather to stay open-minded and in a state where he can receive information and inspiration. You always have to be ready for that little artistic Epiphany.”

Still not convinced about visiting Iceland? Watch this wonderful video and I’m sure that you’ll be booking your tickets. The Inspired by Iceland series of tourism videos have won numerous awards, and rightfully so. They present the country and its people in a fun, friendly, and quirky way… Exactly as it should be! I’m looking forward to being back in Iceland soon… Hope to see you there!

« Capture the Colour
One Year of iPhoneography and Instagram »