BMW World — The calm before the storm 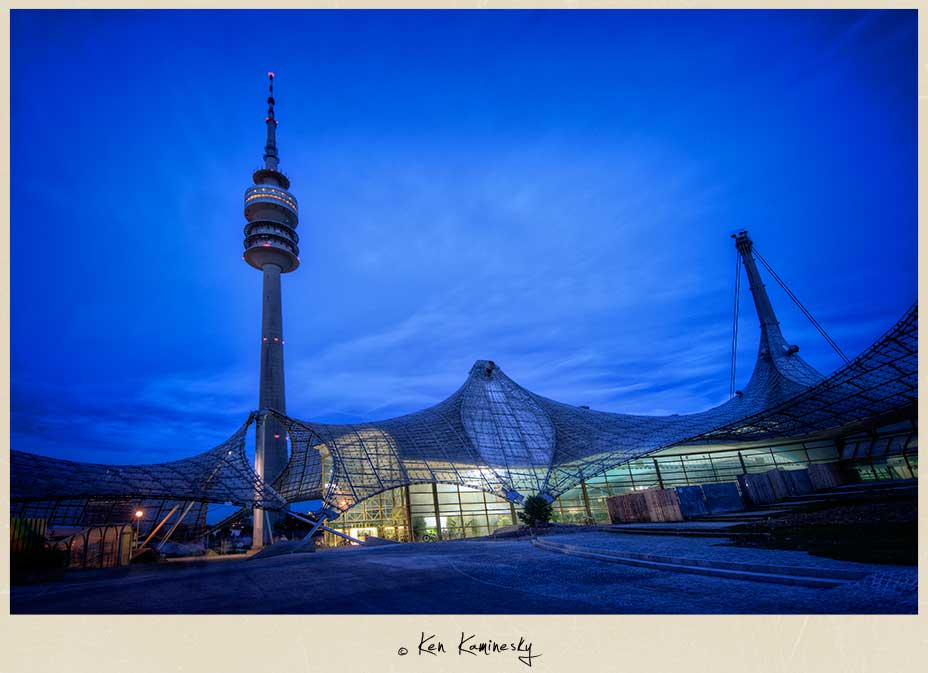 The tower at Olympiapark

Since Munich was the last stop on my central European journey last summer, I fully expected to take it easier than I did at the start of the trip. As so many of my friends know already, I am quite often wrong and this was no exception to that rule of thumb.  I began this “leisurely” day by walking to Nymphenburg Palace and shooting there for the morning, followed by a mid day shoot at the Munich Central Station (German: München Hauptbahnhof), then the exterior of BMW World during the afternoon, followed by Olympiapark and then back to BMW World for a night shoot.

Some days are like a dream and this was one of them. I had a chance to walk back in time at a stunning historic palace, relive some melancholy memories of the 1972 Olympics, and bask in the beauty of some stunning modern architecture while escaping a torrential downpour and lightning storm. This is what travel is all about; a variety  of sensations and feelings that I could not get by watching a documentary or by reading about these places.

“A man must dream a long time in order to act with grandeur, and dreaming is nursed in darkness.”

While going up the tower to take some panoramic photos of the city, the elevator operator — a stern looking german man with salt and pepper hair and striking blue eyes — asked me if I wanted to make a lot of money. Hmmmm thought I, this is weird. It can’t be “that” kind of proposition, after all there were kids in the lift with us. So I said “sure, you wanna help me rob a bank?”

Looking at me with no emotion on his face he said “No, better than that… I’ll let you take my photograph.”

I could honestly not tell if he was joking till a sly grin crept across his face and he laughed a deep hearty laugh as he slapped me on the back.

That’s one of the cool things about being a travel photographer. People are far more prone to speak with you if they see that you’re carrying some serious camera gear. The Canadian flag on my backpack also gets a number of people to make the first contact and I love it. I’m not a very extroverted person when I’m at home, but get me on the road and I feel like a whole new me. I’t not a complete reversal of character, more like a sense of comfort with strangers. I smile more, I talk more, I like that guy who I am more… Hmm, maybe I should travel more! 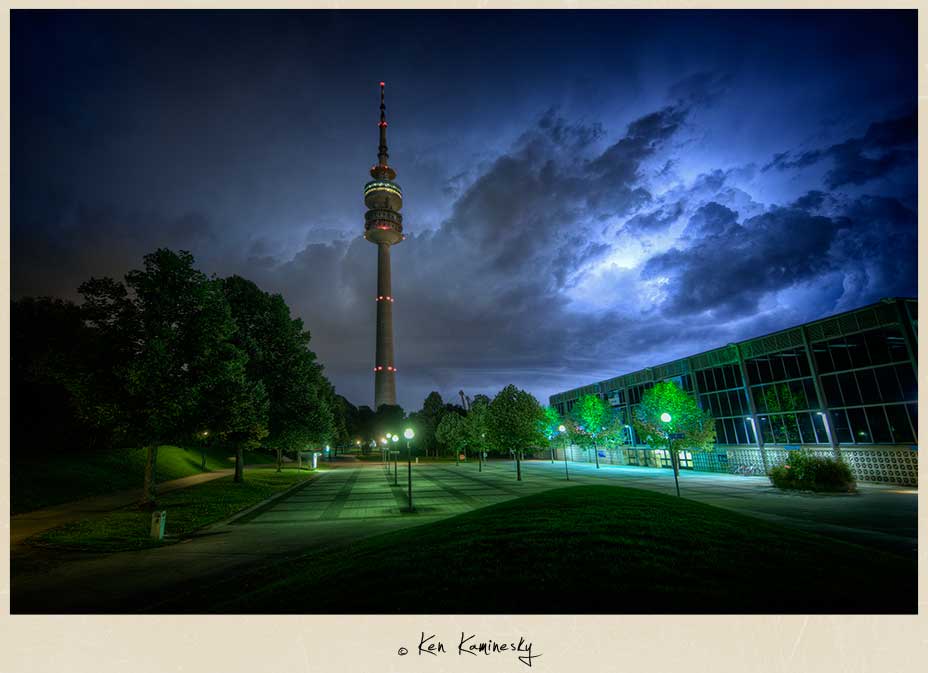 Lightning behind the clouds at Olympiapark

Fire in the sky

As I was walking back to the train station from Olympiapark I could smell the rain that was on the way. Shortly after that the sky erupted with flashes of lightning and I was mesmerized by the sight. Hoping to catch a few streaks of crazy lightning bolts in my images, I set up my camera on it’s tripod and waited. Using a tripod in a lightning storm is not the best advice I’d give anyone, but the rain was still a way’s off and I felt no immediate danger. Then again, what the hell do I know about the dangers of lightning?

That flash in the clouds that I captured was about the only bit of lightning I was able to capture that night. No streaks, no zigzaging bolts, I’m still disappointed. It was a really intense storm that was brewing and I’d find out soon just how intense. 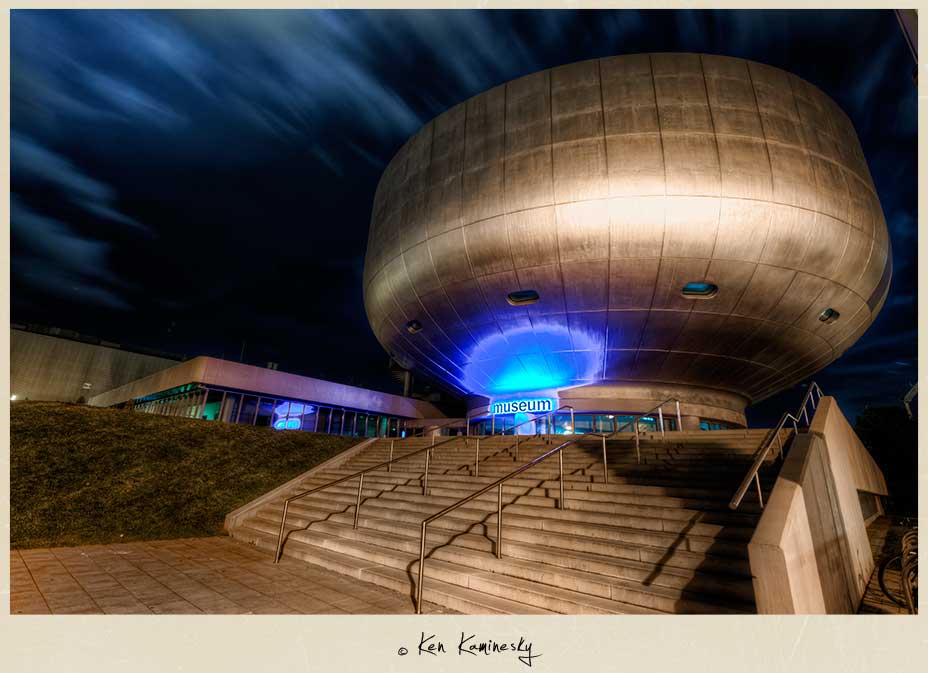 The first drops hit me as I approached the Museum. Lucky for me I had the time to set up and get one more outdoor shot before the downpour hit. I wasn’t able to make it inside the BMW museum that day but did get some cool shots from the outside; both night and day.

After this shot and a couple of attempts on the walkway heading towards BMW World the heavens opened up on me with a sincere fury. It was like being caught in a tropical storm and I was about to be stranded… Or so I thought. 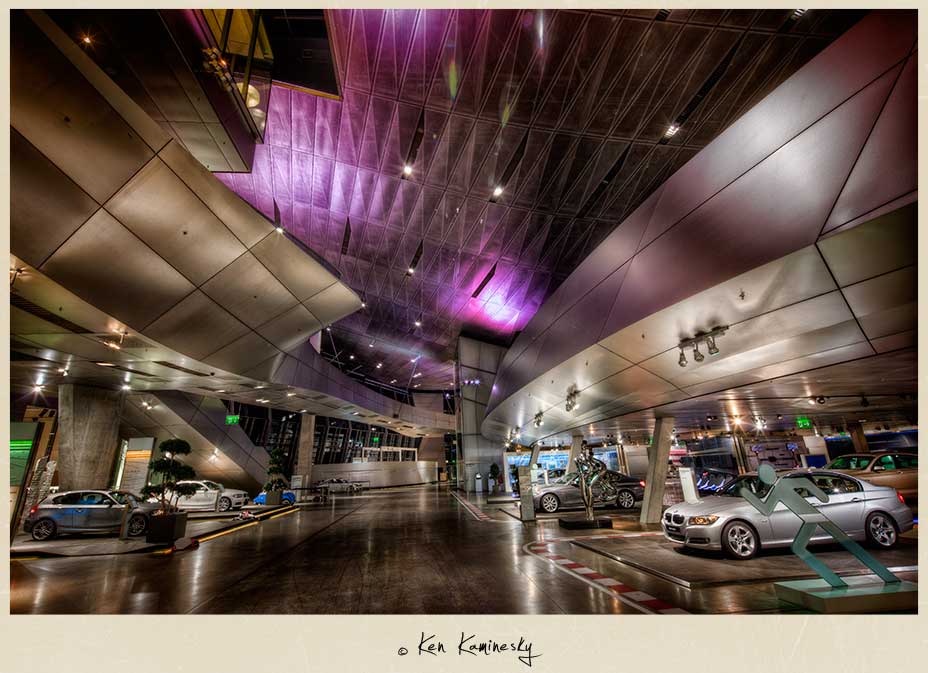 “There is an immeasurable distance between late and too late.”

By some stroke of good fortune I found myself directly in front of BMW world when the rain began to fall, and I was able to make it to an area of shelter from the elements near the main entrance. There were 3 other people who were there with me and we all looked at each other thinking grinning as we were all within a moment of getting totally drenched. In fact the shelter in front of the building was not nearly as impressive as the interior, but it was after 10 pm and so I figured that I was out of luck on that. Then the door opened and someone walked out and the door remained open. Hmmm… That’s odd. 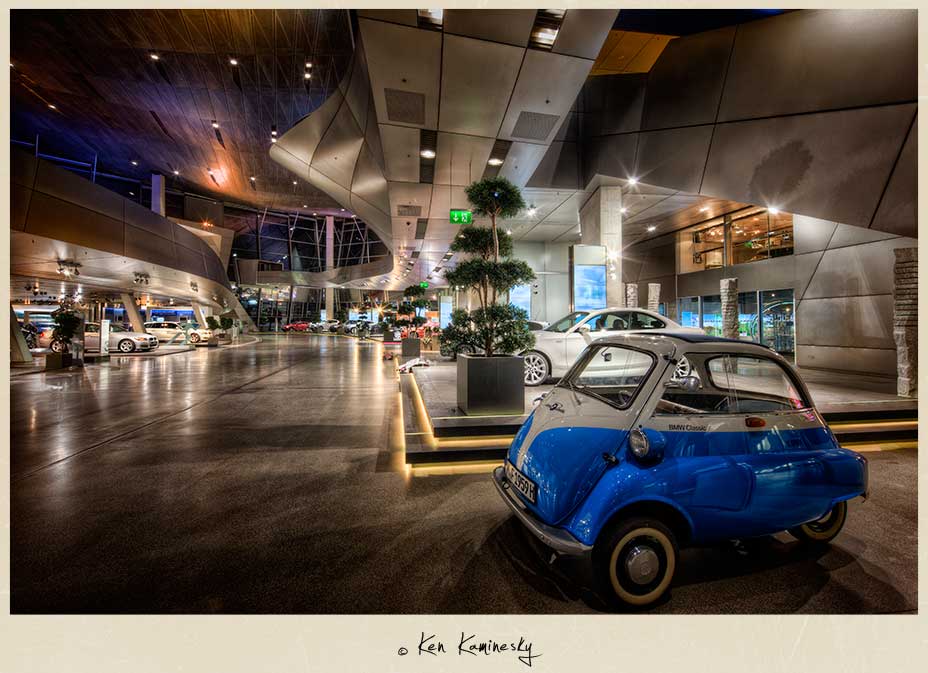 “Into each life some rain must fall.”

The rain was strong and yet the winds were even stronger. Slowly but surely the spray was hitting exactly where I was standing and so I figured, what the hell and entered the building. I was totally expecting security to be right there at the door, yet there was no one. I’m used to being told to leave a place because of my camera gear and especially my tripod, but all I could see were a few people cleaning the place.

I had meant to stop by earlier in the day to take photos here, so I figured I may as well at least get one quick shot before I’m asked to leave. Quickly, I set up my camera on my tripod and I even had a few people who looked liked they worked there walk by me — no one said a thing. Phew! 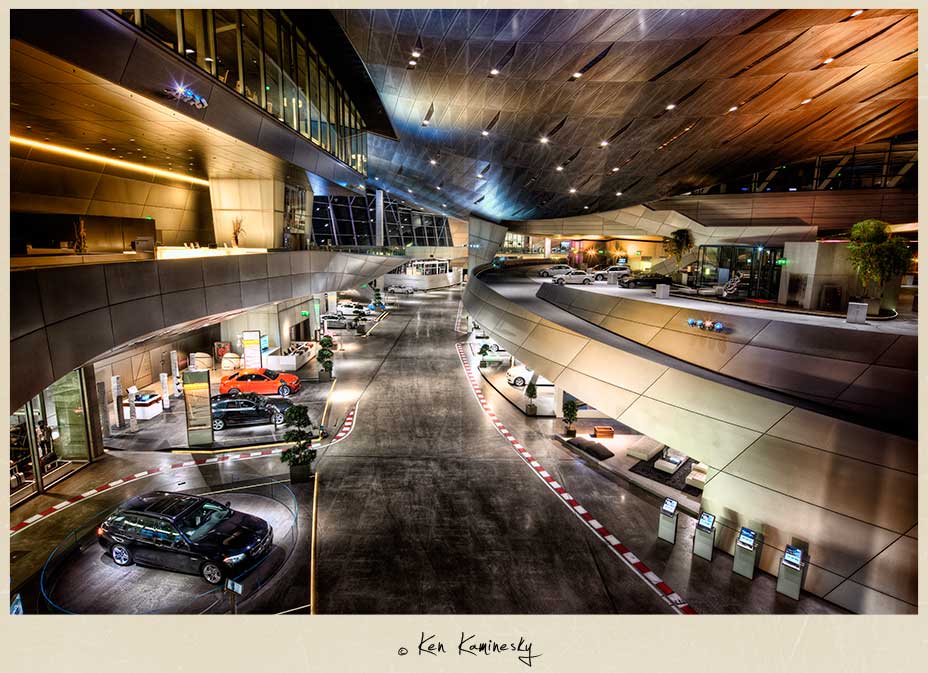 After “getting away” with that first shot I figured I may as well move on in and see if I can get a few more shots. That’s when I saw the pretty blonde receptionist who was talking on the phone. Uh oh, she was bound to stop me and ask me to leave — or so I thought. I had to pass right in front of her to continue on my quest for more photos, so I figured that I may as well talk with her to see if I could butter her up so that she’d let me keep shooting. She looked rather annoyed at me as she had to get off the phone (obvious to me that it was a personal call) so I thought that here is where my evening of fun photography was about to come to a grinding halt. To my pleasant surprise, she was totally cool with me and said that the place was open until midnight! “Sure, go ahead, have fun” she said to me when I asked if I could keep taking photos. Huh?? Really? Damn, I must be more charming than I thought, or perhaps she just wanted to get back to that phone call. No matter the reason, I was happy to keep shooting in such a cool location AND I was not getting soaked. Double bonus. The only thing that would have made it better is if she would have handed me the keys to a new jet black M3 coupé, winked and said: “All yours… Enjoy!”

A guy can dream, right? 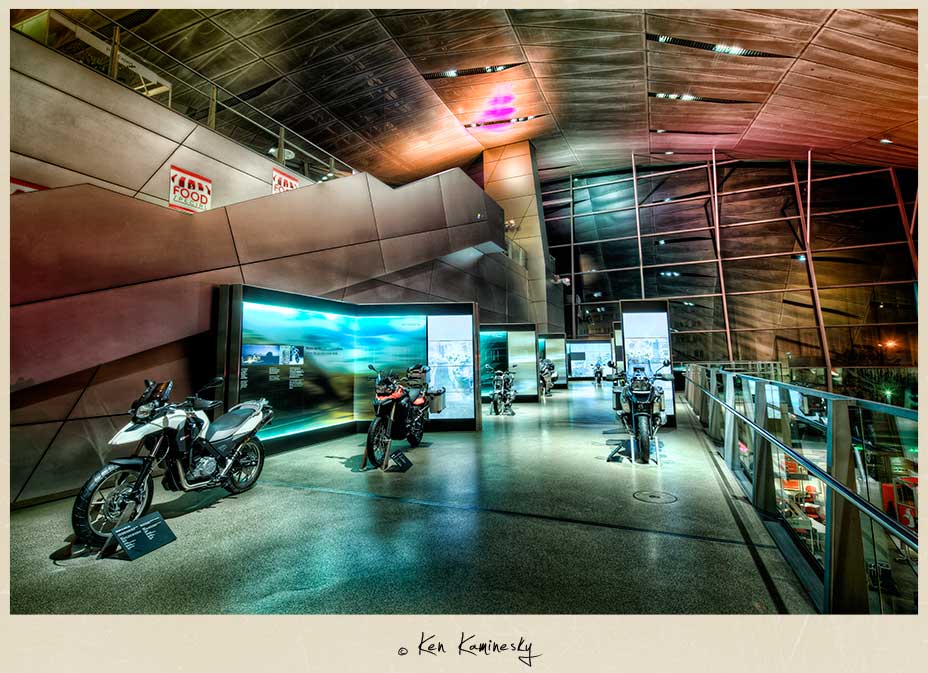 I spent another hour walking around BMW World, admiring the cars, motorcycles and even more so the architecture. I had an early morning the next day as I was scheduled to photograph the Bavarian State Opera House, so it was time to go and catch the train back into the centre of Munich where I was staying.

On my way out I stopped to thank the receptionist who I then found out was from Ukraine. I immediately impressed her with the 5 words in Ukrainian that I could remember from all those “wasted” Saturday mornings of my childhood, when my parents made my sister and I go to Ukrainian school as all the other kids got to stay home and watch Scooby-Doo, Land of the Lost, and Bugs Bunny cartoons.

My work here was done :)

« Wonderful Washington DC after dark
My Photography: Before and After the image editing »