An Afternoon at the Regal Hotel Imperial in Vienna 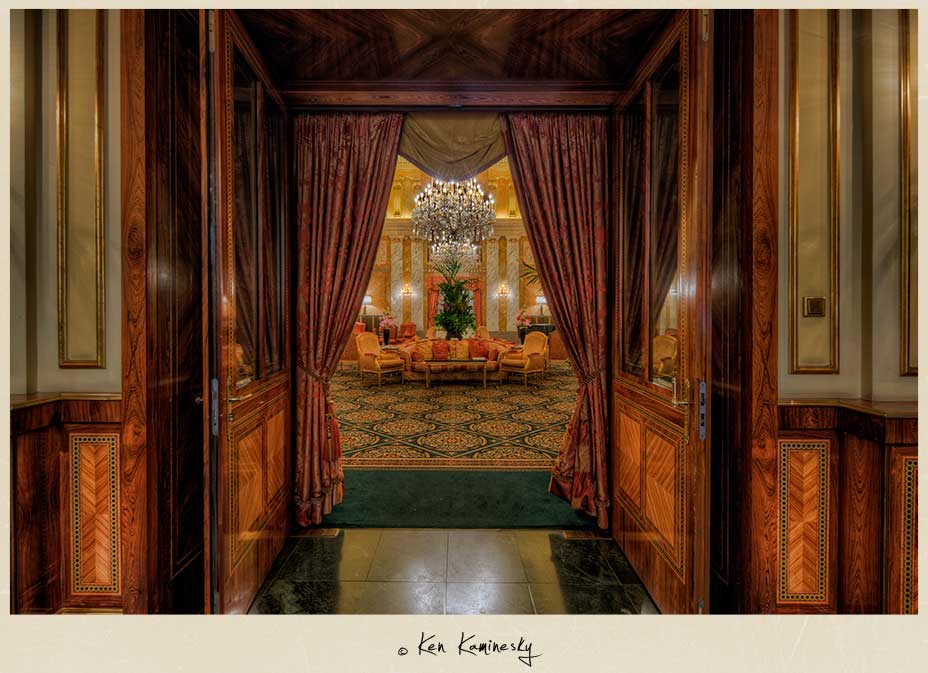 As I meandered along the Käerntner Ring on my first summer morning in Vienna, I stopped in front of several ornately decorated buildings to absorb the flavour of the city’s architecture. Each building had it’s own character, but all of these lavish buildings put together, one after another is what makes the Ringstrasse such a special street in Vienna. The four kilometre long street completely surrounds the historic city centre and replaced the old ramparts which were of no use any longer.

The Ringstrasse is lined with monumental buildings like the Hofburg palace, Austrian Parliament, the State Opera House, the Museum of the Arts, the first public observatory Urania, the University of Vienna, and the Hotel Imperial in Vienna. 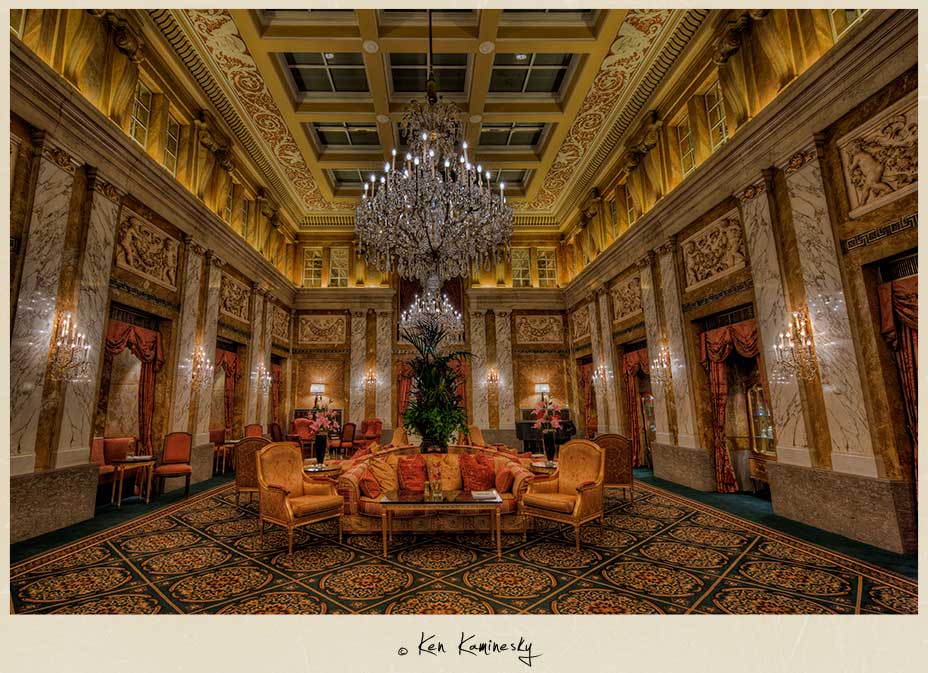 The Hotel Imperial was constructed in 1863 and its original use was as a city palace for Duke Philipp of Württemberg (1838-1917) and his spouse Duchess Marie Therese (1845-1927), née Archduchess of Austria, and its original name was Palais Württemberg. Apparently after only five years of living in this incredible building the Duke and Duchess grew tired of the place and sold it. Must be nice to be able to be that fickle or maybe they were just tired of all the vacuuming that they had to do. ;)

The palace was then converted into a hotel, just in time for the World exhibition of 1873. Two more stories were added to the hotel in 1926. 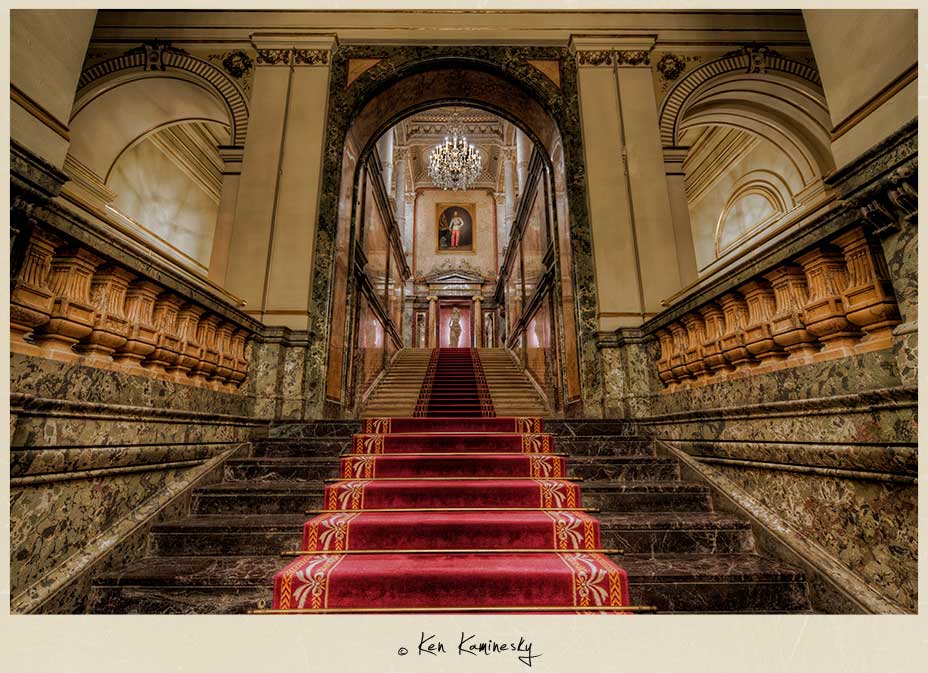 I had the hotel on my list of places that I wanted to photograph, but I had not made any firm plans or contacted anyone there to set up a day and time. Much of what I do photograph is meticulously planned well in advance but it would be impossible to arrange for advance permission from all the places on my list. It takes quite a lot of time and countless emails and phone calls to get to the right person you need to talk to in order to get authorization. Sometimes this can be easy but more often than not, the process can be arduous.

Many locations are suspicious of my motives for wanting to take photos, others have strict rules forbidding photos or tripods and some people just like to power trip and make other people’s lives miserable. While I was welcomed to photograph the The Bavarian State Opera House (Bayerische Staatsoper) in Munich and the Hungarian State Opera House in Budapest, the Vienna State Opera (Wiener Staatsoper) wanted nothing to do with me taking photos there. 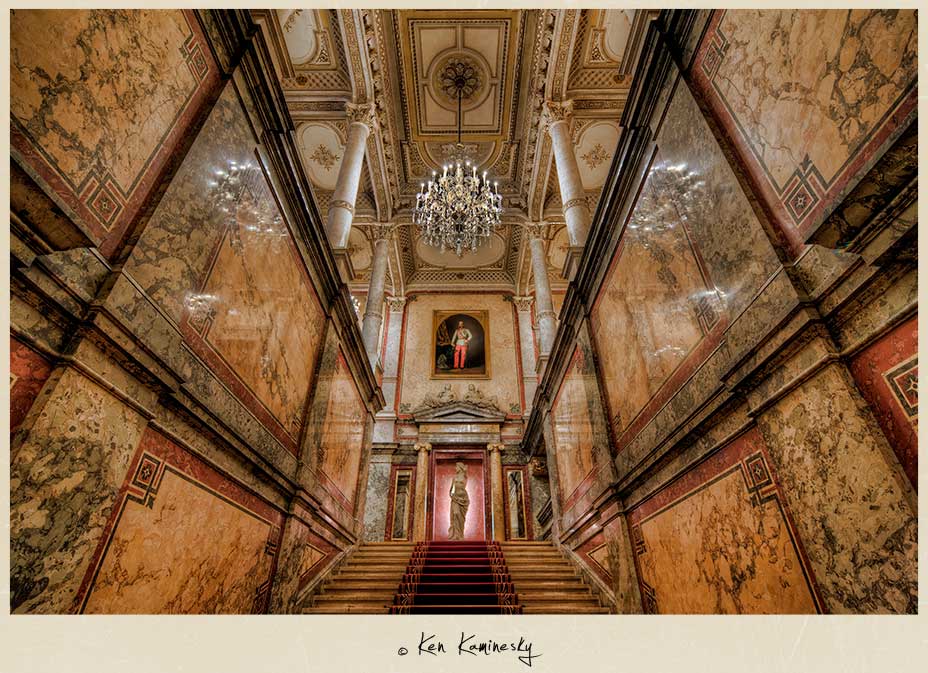 Once I arrived at the hotel and noticed that it would be challenging to get a great shot of the exterior without access to some of the neighbouring building rooftops, I decided to go in and try my luck with the director of PR. I left my card with the front desk clerk and ten minutes later I was greeted by Daniela Stopel, the assistant general manager and PR co-ordinator  who welcomed me to the hotel and gave me the tour of everything I wanted to see. Not only did I get a private tour but Daniela was incredibly well versed in the Hotel Imperial’s rich history both in terms of construction and famous guests. 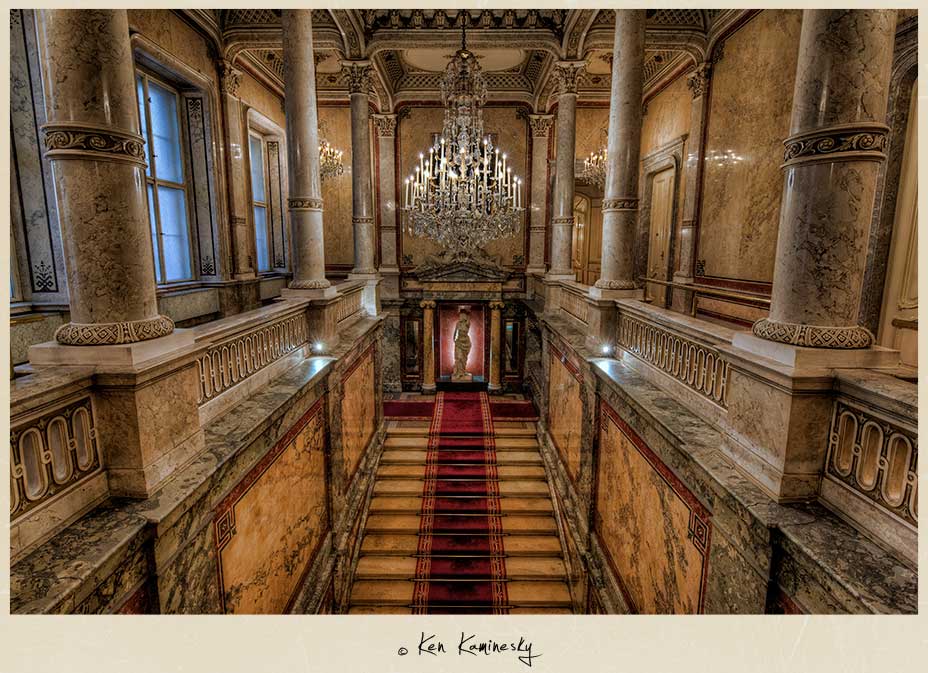 “Everyone will be famous for 15 minutes.”

A short list of the many famous guests that have stayed at the Hotel Imperial:

In a twist of irony, Adolf Hitler once stayed at the hotel and decades later Simon Weisenthal the famous Nazi hunter celebrated his 90th birthday there. 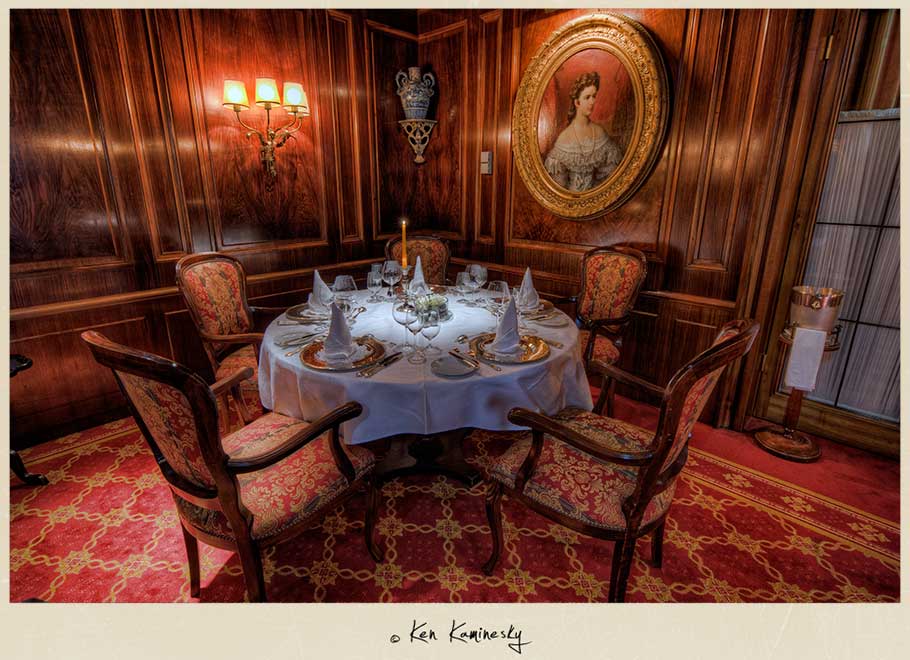 While I did not get the chance to eat at the restaurant pictured above, Daniela was kind enough to offer me a delicious lunch at the beautiful Cafe Imperial. The service was impeccable and the food was absolutely delicious. I’ve said before that I’m not a big fan of German and Austrian typical dishes that are heavy on potatoes and pork, but I do love my noodles and had the best spätzle I’ve ever eaten at the cafe. You’ll have one of the best coffees of your life if you’re lucky enough to eat here one day and if you have had the pleasure then you know what I mean. Starbucks, eat your heart out. 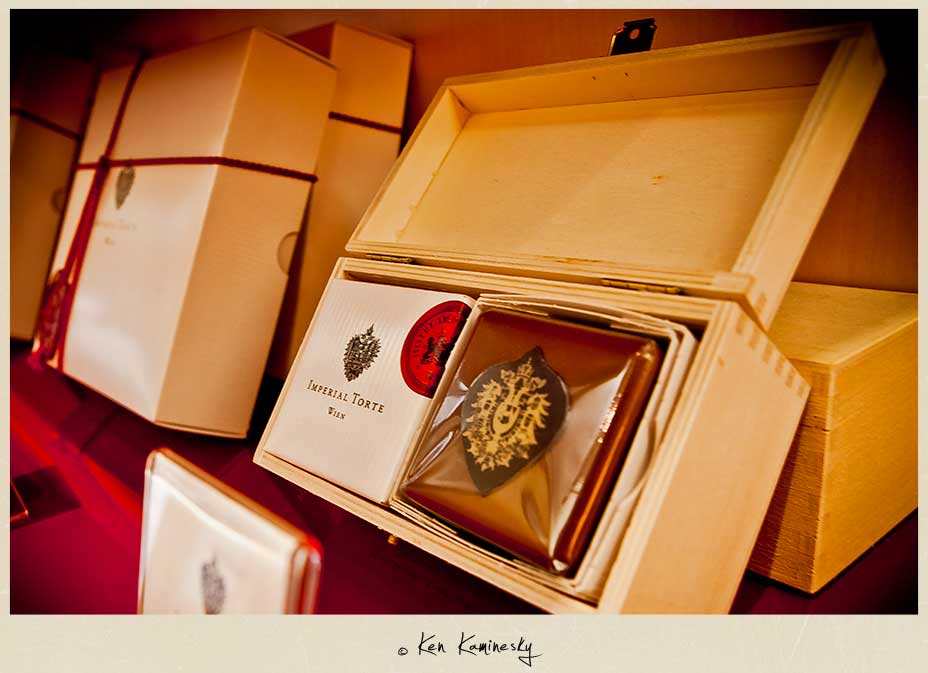 When you go to Vienna, or tell anyone who has been there that you’re going top the Austrian capital, you’re likely to be told to try the Sacher torte at the Sacher cafe. I had several people do just that and I made a meal at the Sacher cafe my splurge meal during my stay in Vienna. I must say that the wiener schnitzel was delicious — however, the cake was good, but honestly nothing to write home about. This meal took place the day after my visit to the Hotel Imperial and I guess I was spoiled after trying the Imperial torte. Now I don’t have a big sweet tooth, but I do appreciate amazing flavours no matter what they are and this cake was like none other I have ever had the pleasure of tasting.

It is made of beaten cocoa cream that is layered between almond pastry wafers, wrapped in marzipan and glazed in deep, dark, decadent chocolate. I think I got a cavity just by describing this delicacy. ;)

So if you have tried the Sacher torte and like it, I challenge you to try the Imperial torte and tell me that it is not by far a superior chocolate experience that will make your mouth water months afterward just by thinking about it. In fact if you really want to be my friend, then please send me an Imperial torte without further delay. They deliver! 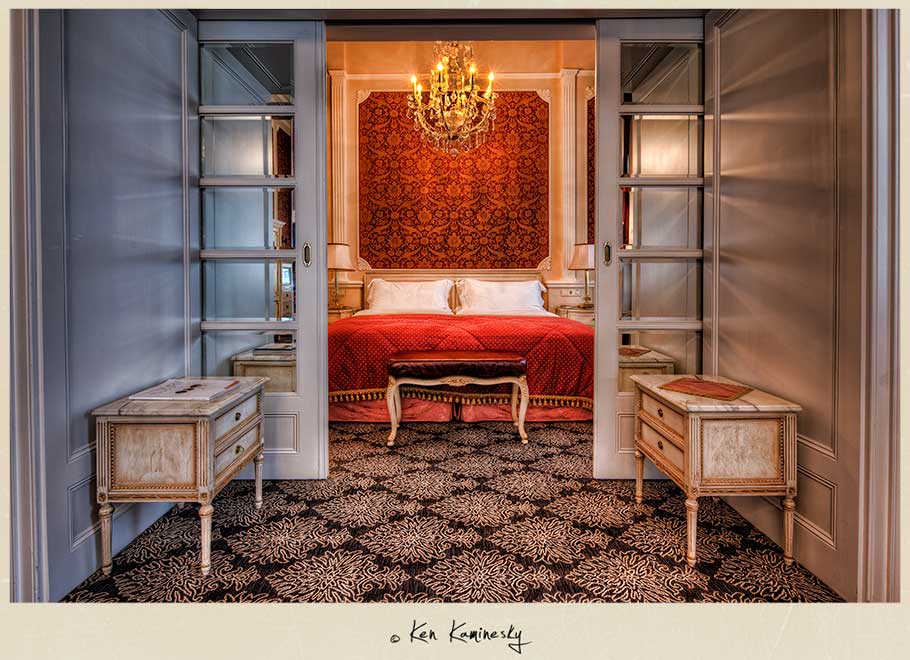 I ended off my tour by visiting some of the rooms, including the Royal suite pictured below. The attention to detail was stunning and I made sure to look twice — if not three times to make sure that I would not bump into anything with my camera bag and tripod. All of the rooms at the hotel are exquisitely decorated and unique in their own way. This truly is a world class hotel and I could feel the sense the pride about the Imperial from Daniela as she escorted me throughout the halls and rooms of this magnificent hotel.

As we walked through one hallway that was lined with the photos of famous musicians, politicians, humanitarians, and actors that have stayed at the Imperial, it made me reflect upon all the places that I get to see thanks to the work that I do. I’m not rich or famous, so on my own I may not be able to afford a lot of the things I do or places I visit, but I do get a chance to experience of some of the more amazing things on the planet. Last year I had the chance to see Mayan ruins and beaches in Mexico, New York City during a massive snowstorm, Savannah’s eerie historic city centre, made a good friend in Charleston, met up with my online and now real life friend Kirsten in Charlotte, toured Jordan where I  floated on the Dead Sea and visited the lost city of Petra, explored the central Florida lake region, saw surfers in Munich, Palaces in Innsbruck, the famous Spanish Riding school in Vienna, the oldest restaurant in the world in Salzburg and drove a speedboat on the Danube in Budapest. Not bad, right?

It looks like this year may be even more amazing and I just can’t wait to get on the road again. 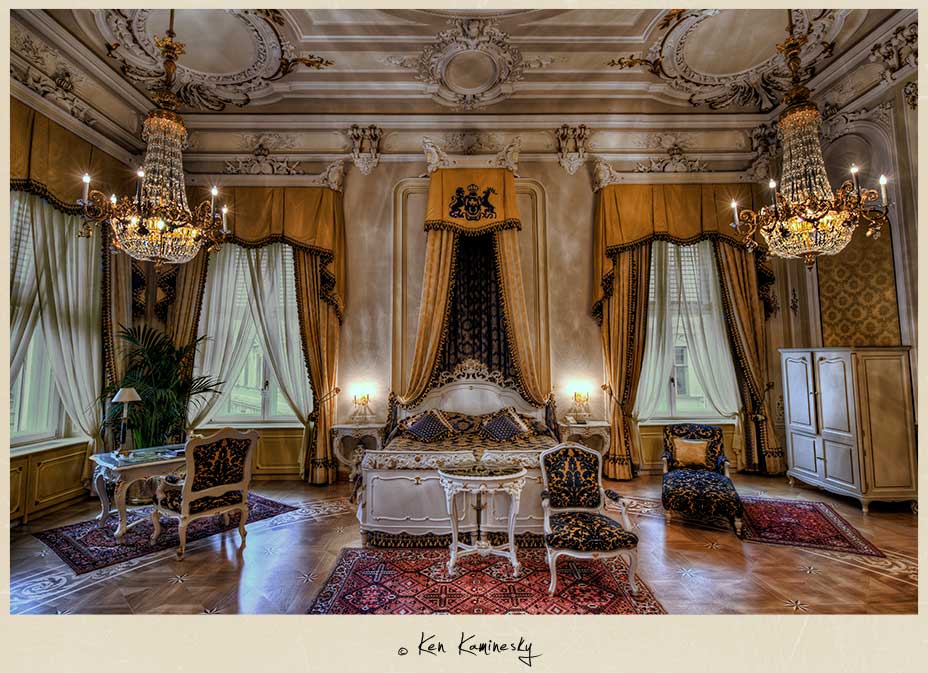 Speaking of being on the road again, I’ll be back in Toronto later today to take part of Social Media Week. I’m being hosted by VIA Rail and the Royal York Hotel for events all day Monday and Tuesday morning and hoping to meet up with a bunch of my Toronto based travel blogger friends like:

Looking forward to meeting a ton of new people as well this week and work on my next trips. I’ll have at least one more to announce after the week is up and it’s gonna be an awesome location that I’ve always wanted to see and photograph.
So far this year I have Umbria and Tuscany in Italy in April, Iceland in May, Newfoundland and Labrador in June and four more locations that I’m working on for later in the year. Looks like a good year to me. :)
My thanks to Daniela form the Hotel Imperial for the royal treatment I received  during my visit. Hope to see you the next time I’m in Vienna. Keep that Royal suite available for me!