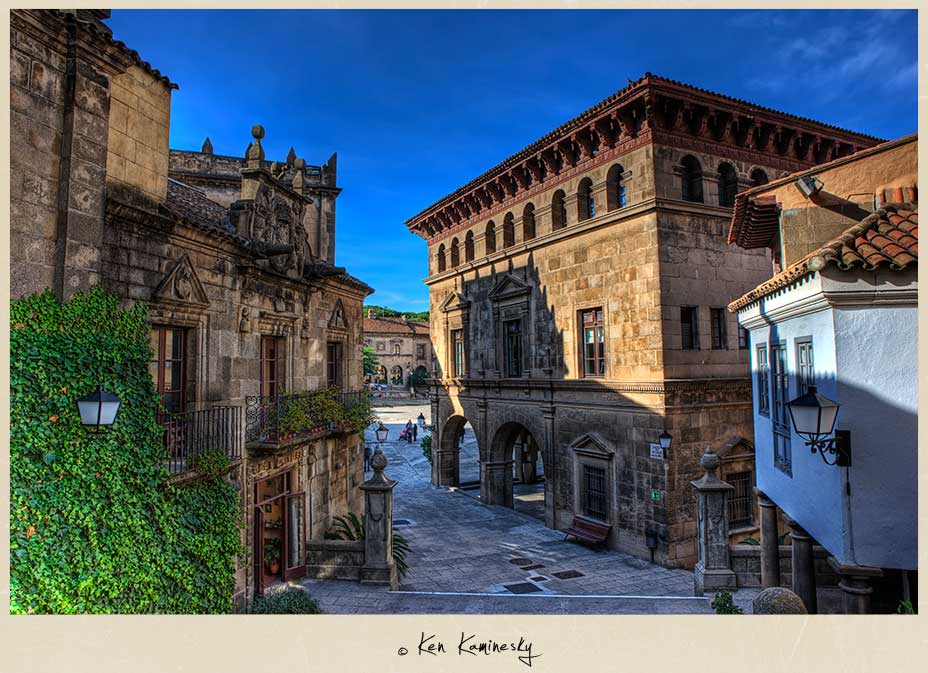 Poble Espanyol (Spanish: Pueblo español, “Spanish Town”) was one of those unexpected treasures that I discovered while doing my pre-trip research on Barcelona. I was intrigued to read about the diversity of art and architecture in this special part of the city and I was lucky to be there on a quiet day with a lot of opportunities to get my photos without people in them.

This mock town was  was constructed in 1929, for the Barcelona International Exhibition and was supposed to be torn down shortly afterward. Due to it’s great popularity Poble Espanyol was saved and became a centre for art, culture and architecture. 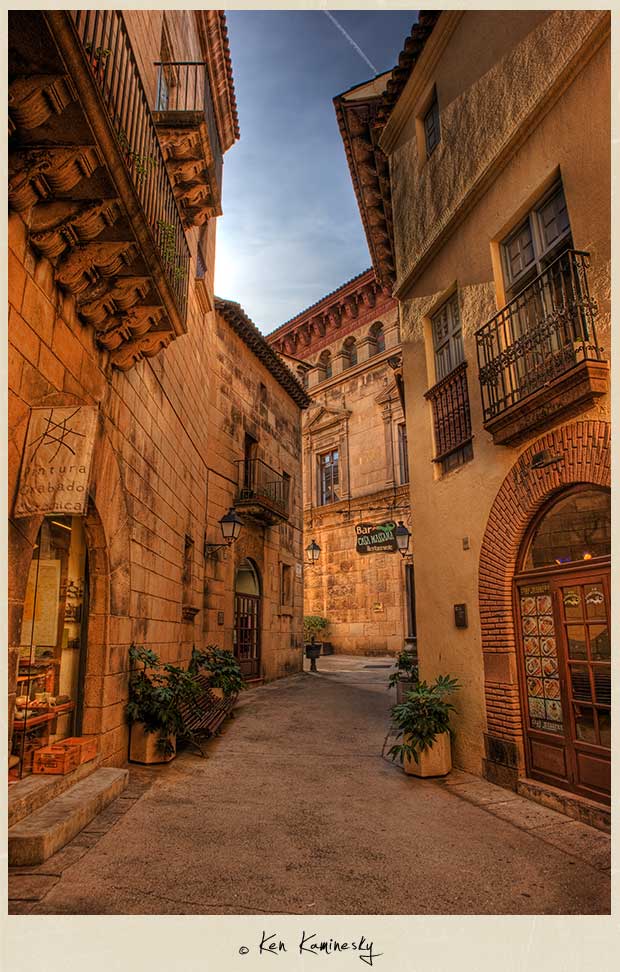 “Architecture in general is frozen music.“

While Barcelona is synonymous with Antoni Gaudi’s masterful architectural works, Poble Espanyol was the brainchild of another of the city’s best architects — Josep Puig i Cadafalch. However, the actual designers of the town were two other architects — Francesc Folguera and Ramon Reventós. Their collaborative idea of having a whole town be a museum was quite unique and today we can still see the 117 buildings as they were conceived back in 1929. The whole area that the buildings cover is over 42,000 m2 on Montjuïc hill.

The buildings themselves are in large part exact reproductions of existing buildings in other regions of Spain, while others merely represent a specific architectural style found throughout the country. The whole town was constructed in a mere 13 months! 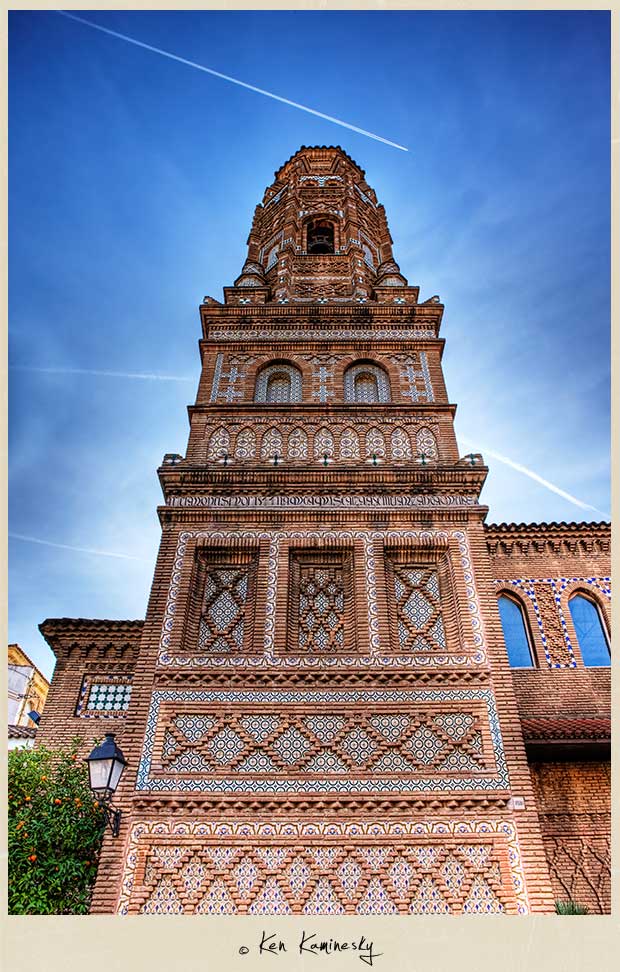 “Architecture should speak of its time and place, but yearn for timelessness.“

Representations of buildings and architectural styles from these areas of Spain are included in the layout of the town: 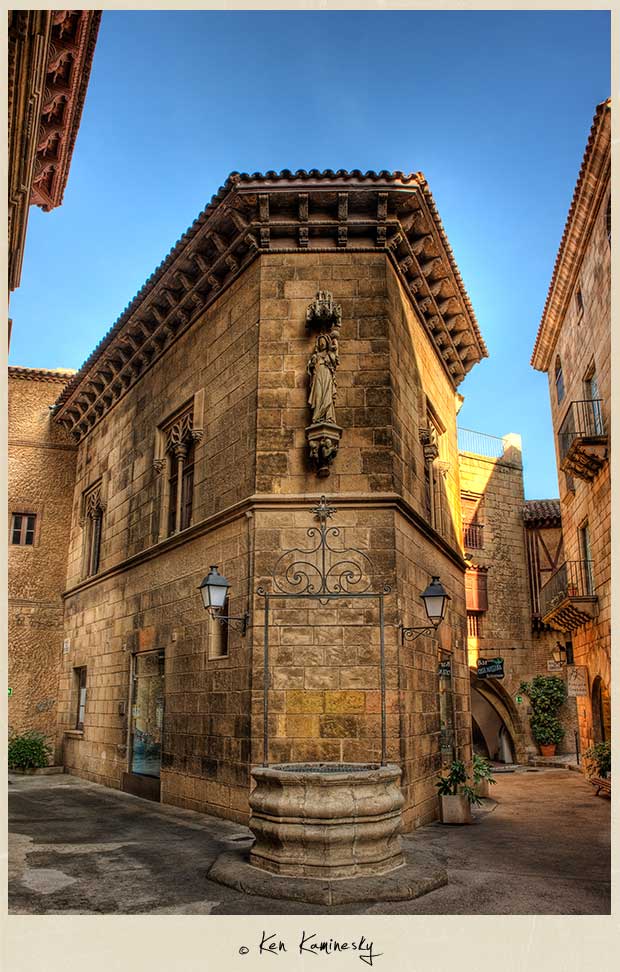 “If a building becomes architecture, then it is art.“

Today Poble Espanyol is home to art galleries, museums, a children’s village, shops, and artisans who use the town as their base of operations. This is my kind of place! I was able to browse through the beautiful glass  sculptures, tapestries, jewellery, ceramics, engravings, as well as the delicious wine, cheese and chocolate shops. There is something for everyone here, even if you just want to take a nice walk in a picture perfect setting; you can’t ask for a better location than this.

There are no vehicles allowed in the town, so it’s a perfect setting for a family outing and no matter how old you are, you’ll love watching the glass blowers, ceramic artisans, guitar makers, painters and sculptors as they work on their projects in full public view.

I’m just brushing the surface of what’s available to do, see, taste and experience at Poble Espanyol. Once you’re done there it’s just a stone’s throw to the Olympic village, the Magic Fountain of Montjuïc, the Barcelona Pavilion, and the National Art Museum of Catalonia. That should be enough to keep you busy for a little while. 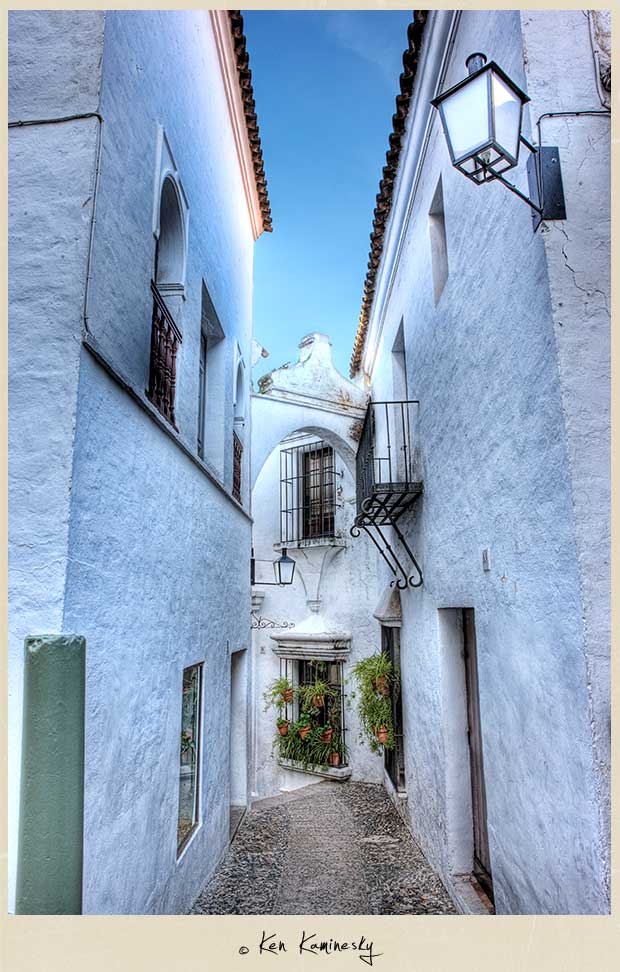 On my walk to and from Poble Espanyol I meandered along the paths on Montjuïc hill and was quite surprised by the prolific amount of stray cats living in the wooded areas. Not only did I see tons of cats walking around like they owned the place in typical cat fashion, but sweet jeeebus the meowing! In some places it was so loud that I knew that there was some territorial dispute going on between rival kitties and as I have 2 of my own vocal cats, I’m used to some rather weird and disturbing cat sounds. Most of the cats looked like they were in good shape and well fed. In fact as I was preparing to head to the Olympic village I was happy to see that there were several huge plates of cat food placed strategically for easy feline access. :D

I never like to see stray animals like this but at least these cats seemed to be healthy and no one seemed to mind them. Not a single one displayed any aggressiveness towards people, so I’m guessing that they have been there a while and the people of Barcelona have big hearts and take care of them. I’d love to know if anyone has any back story about these cats. There were so many different kinds and a few truly spectacular looking ones. Yup, I love cats… Dogs too but I can’t devote the time to a dog, and my cats take good care of each other most of the time, so it makes better sense for me living alone to be a cat person. I miss them when I’m on the road like on this three week trip to Europe and even more so when I see other cats. One of the nicest things about returning home is knowing that my two little furry buddies will be there to welcome me back. 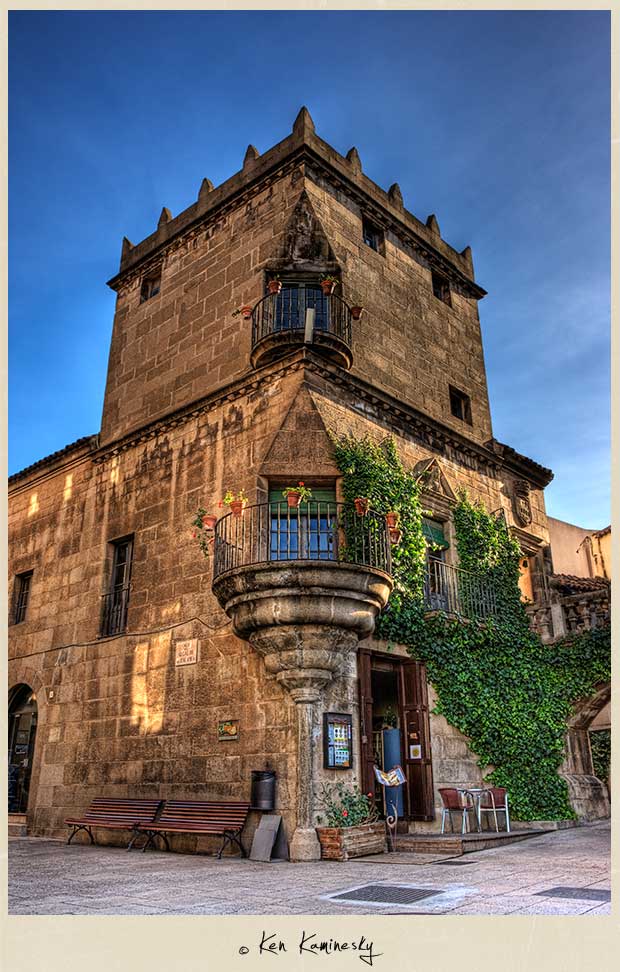 “Architecture starts when you carefully put two bricks together. There it begins.“

If you’re a fan of Architecture like I am, then Barcelona is one of those places that you must see at least once in your lifetime. This city has so much to discover in terms of  the incredible diversity in the styles of architecture both exterior and interior. You could spend a week just exploring Gaudi’s treasures such as Sagrada Famila,Parc Güell and Casa Batllo but there is modern architecture like like Jean Nouvel’s Torre Agbar and the Torre Telefónica designed by Santiago Calatrava as well as other masterpieces  like the Palau de la Música Catalana — designed in the Catalan modernista style by the architect Lluís Domènech (many say that this is the most beautiful building interior in the world) and so many more that I could go on for hours.

Amazing architecture, a vibrant art and music scene, the mild Mediterranean climate and what may now be the best city for food in the world; Barcelona has it all!