Walking in Savannah After Midnight 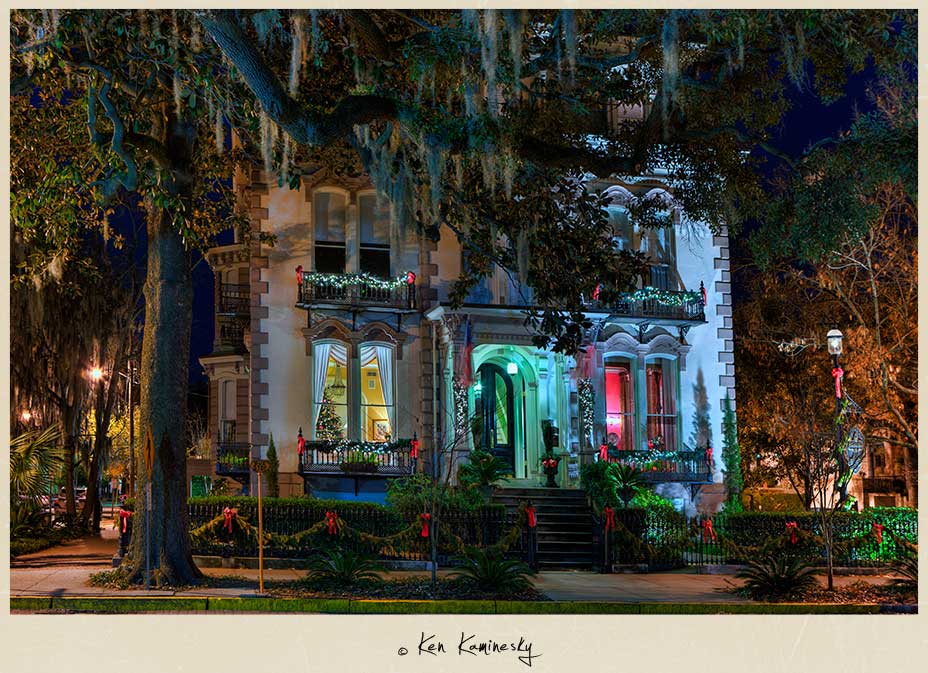 I often think of one of this great old song by Patsy Cline when I am still out taking photos after midnight in another new city that I can’t seem to get enough of. 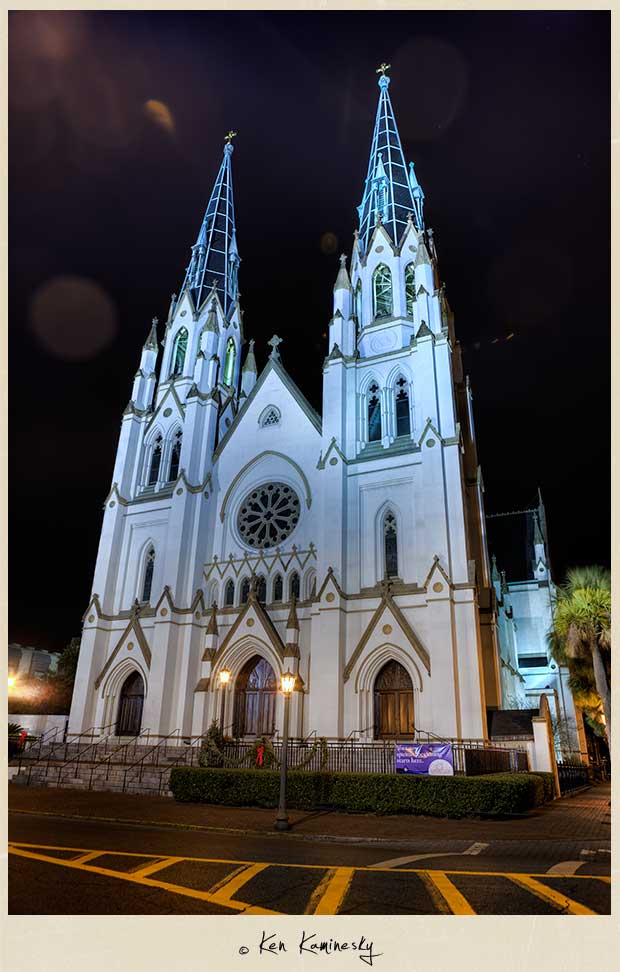 The Cathedral of St. John the Baptist

Walking in Savannah late at night was one of my all time favourite travel experiences. In the beautiful historic district of the city, time stands still… Especially after dark. It’s a quiet time, but there is a lot to see as the buildings, streets, and parks all transform into a scene out of an eerie suspense movie.  Many of the majestic homes such as the Hamilton Turner Inn have been converted into unique hotels and B&Bs, while many of the other Federal, Neo-Gothic, English Regency, Steamboat Gothic and Victorian mansion interiors have been made available for the public to view… for a price. Some are even said to be haunted! 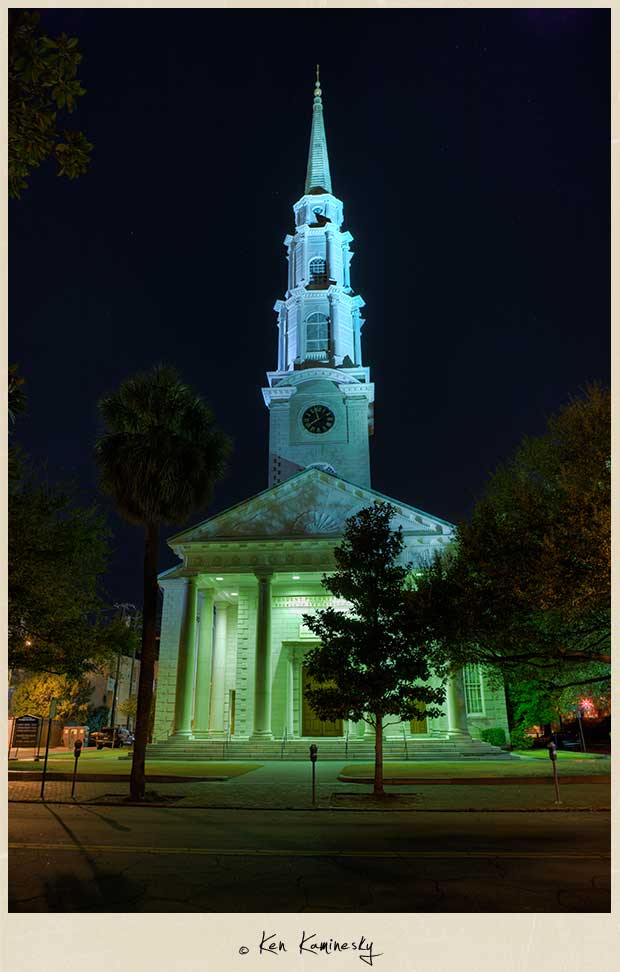 “Savannah is a lovely, gentle, sad old city. You can walk through the shadowy, cobbled streets of the town on a tranquil Sunday morning and feel the atmosphere heavy with the burden of lost greatness and relaxed by quiet decay”

Even the churches take on a rather creepy feel at night in Savannah. It seems to me that the way all of the buildings are lit up at night was done with the intent to add a rather uncanny feel to the historic district. No southern city represents the true feel of the American Old South more than beautiful Savannah. General Sherman spared it from the torch during the U.S. Civil war and I imagine it was at least partly because the city touched him in a visceral way, as it does to so many of the people who live in and visit this special place. 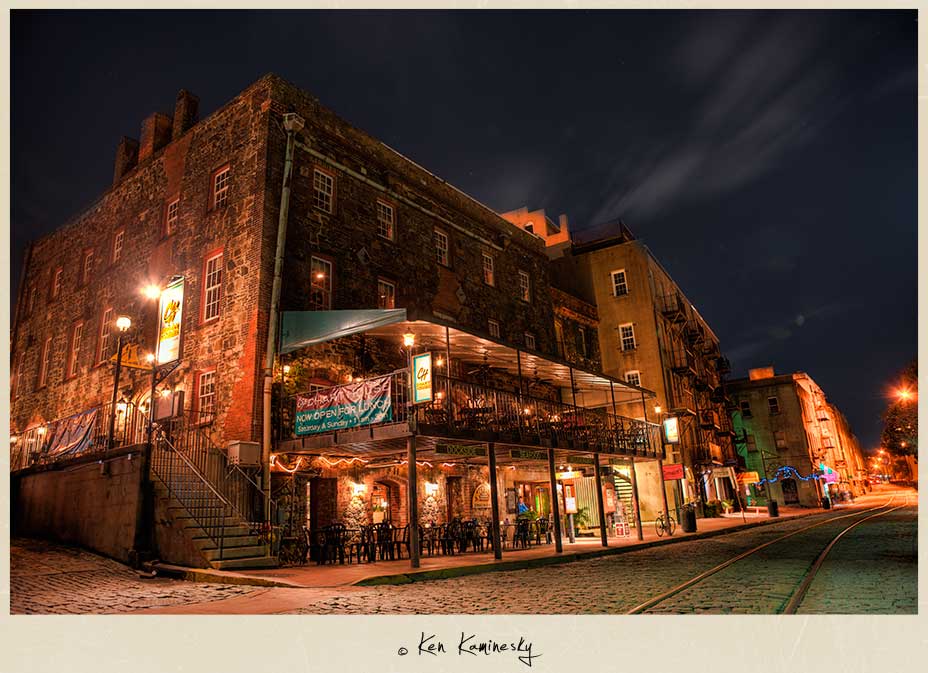 River Street at Night in Savannah

River Street… A perfect place for a midnight stroll

Less traffic and fewer people milling about at night make it easier for me not only to get my photos, but to also get absorbed in the historic atmosphere of a place. Only hours before I took the shots on River street, hundreds of people were walking by and dozens of cars, trucks and even streetcars would clutter the scene making it challenging to get that perfect shot. I was even lucky enough to have booked my hotel right on River street and had an incredible view! 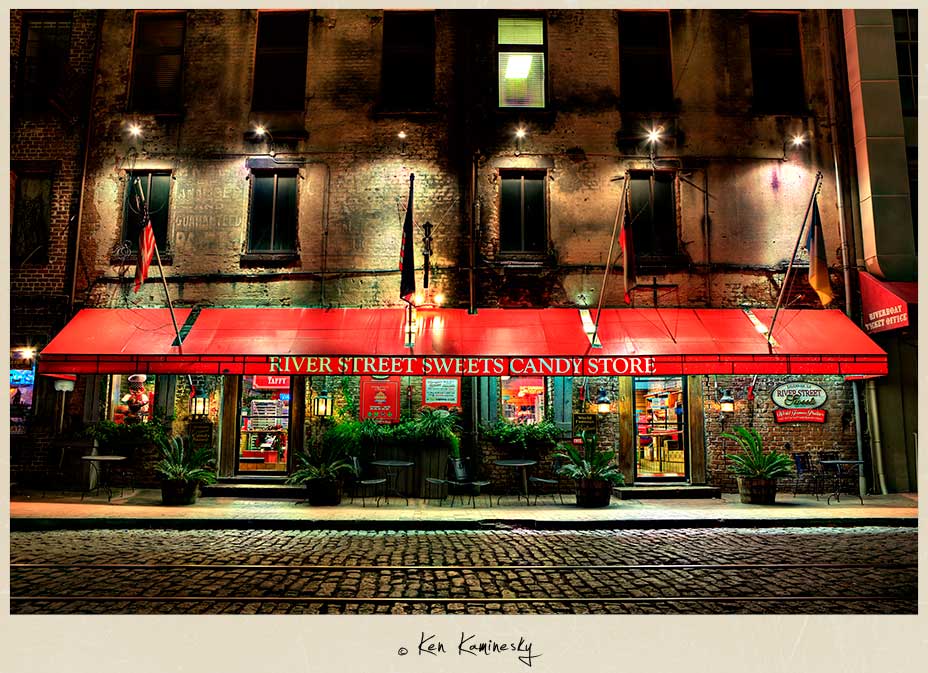 The River street area reminds me a lot of De la Commune street in my hometown of Montreal. Both are near the port and are in the most historic parts of the city. They also have some great restaurants, historic attractions and art galleries and museums. Many of these new businesses are located in buildings that were once warehouses and factories… Oh how the times have changed. Both the Historic District of Savannah and Old Montreal are now the hippest and trendiest areas to live in these cities. You won’t be finding any warehouses in either of those areas any more. 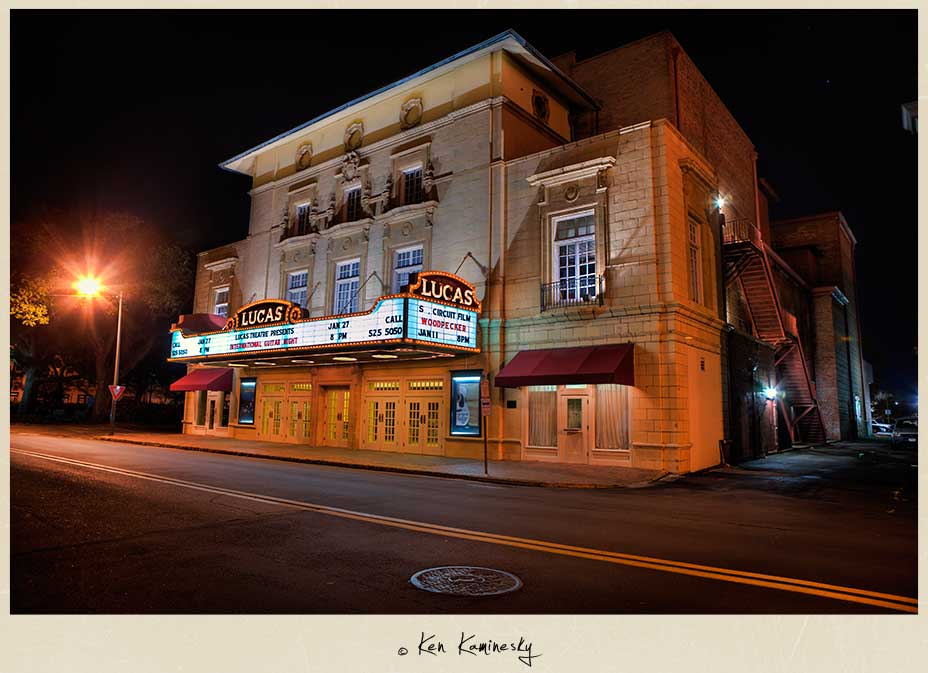 Savannah is synonymous with art… Thanks to SCAD!

The Savannah College of Art and Design  is a private, accredited and degree-granting university with locations in Savannah and Atlanta, Georgia, Hong Kong, and Lacoste, France. I didn’t realize what a big part of cultural and artistic life is influenced by having an art school in the city. SCAD is big in Savannah and rightfully so. The university has been responsible for the restoration of several historic buildings to be used for several of the university’s needs. By doing so they have been been recognized by the American Institute of Architects, the National Trust for Historic Preservation, the Historic Savannah Foundation and the Victorian Society of America. They even restored a couple of old 1950’s diners and run them. The Streamliner was one of the creepiest photos I was able to take in Savannah and that’s saying a lot for a city where most of the homes look like they could be haunted! 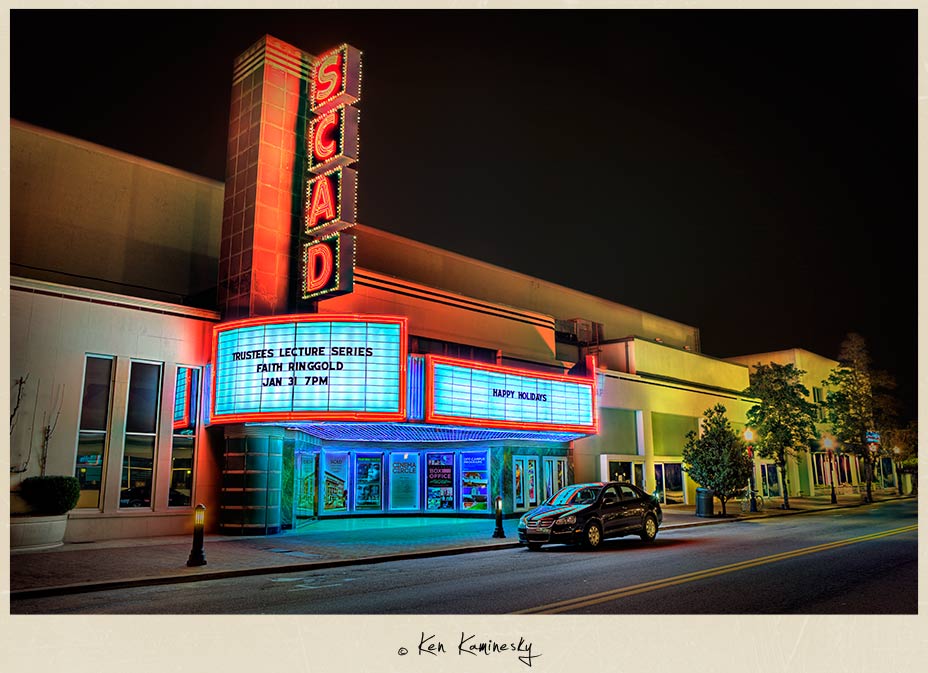 Two of the buildings that SCAD now runs are the Lucas Theatre and the Trustees Theatre. The buildings are a five minute walk from each other but have completely different styles, yet both fit perfectly in their respective areas of the Historic District. I wish that I would have had more time during my Savannah visit to photograph more of the beautiful buildings that SCAD has helped to restore, but something tells me that I’ll be back to photograph this stunning city one day when the magnolia trees are in bloom and Savannah is at it’s finest.

I received an email this morning from Meaghan (Walsh) Gerard who is the Managing Director, Lucas Theatre for the Arts. She was kind enough to point out an error in the above paragraph.

“We are not owned or managed by SCAD.  The Lucas is a 501(c) 3 nonprofit with a separate board, etc.  SCAD kindly donates to us as a nonprofit.  In return for their sustaining donations, the Lucas is often a venue for some of their events.”

One of the things I’d suggest to anyone, and not just photographers, is to get out and walk around after dark, after the shops and restaurants have closed. This will open up a brand new way of looking at a place and it can be very peaceful. Do your research, be safe, and preferably don’t do it alone in places that you’re unsure of, but trust me, this is a great way to experience a city to get a different perspective.

While you’re at it… Why not take a few photos?