Inside the Magnificent Hungarian Parliament Building in Budapest 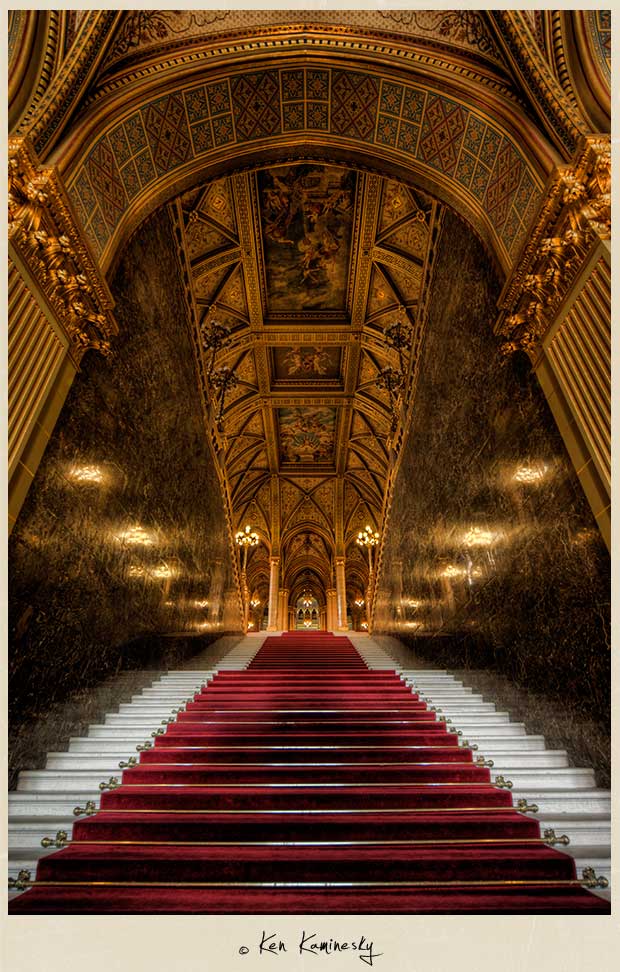 Red Carpet… For me?

When I told friends that I was going to be in Budapest, several made a strong point of telling me about how special the Hungarian Parliament Building was. I had just arrived from the other old capital city of the Austro-Hungarian Empire and had a big fill of amazing architecture in that wonderful city. After seeing so many beautiful things in Vienna, it was going to take a lot to impress me on the next leg of the trip. 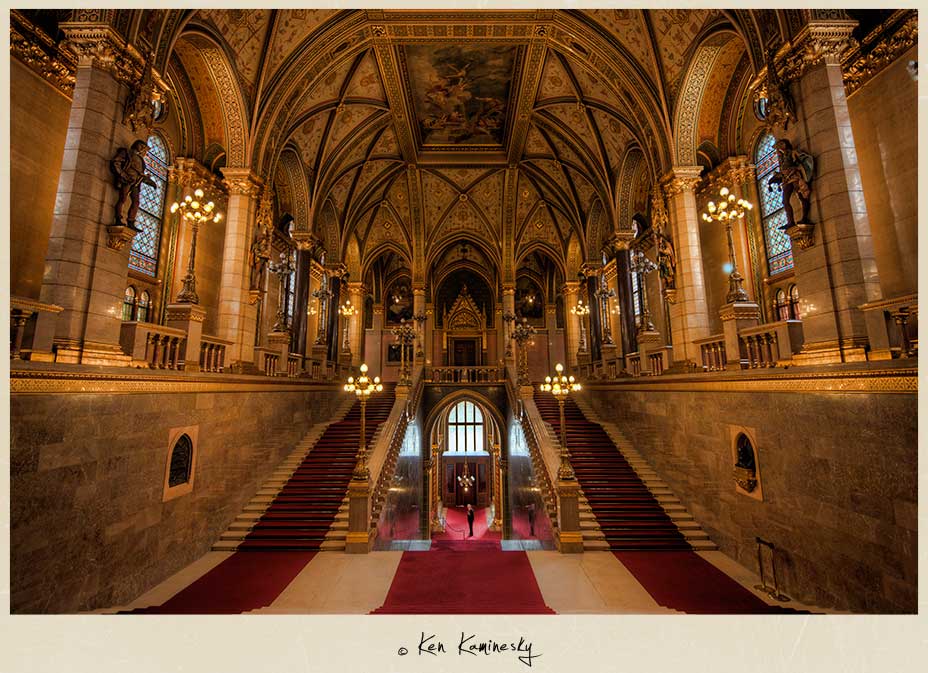 Triple red carpet? You shouldn’t have!

When I arrived in Budapest the Hungarian tourism board had already set up quite an itinerary for me. When I was being walked though the pages of information I was given about the places I was to visit by my superguide Vivien, her face would literally shine when she spoke about parliament. I had not seen any photos of the interior of the building, so for me  it was going to be a surprise. On my first night in the Hungarian capital, Vivien took me on a nice long walk along the Danube river banks and I was able to see the parliament from the outside. Like all the other buildings along the waterfront it was spectacularly illuminated and the scene whetted my appetite to see more of this exquisite edifice.

It wouldn’t be long before I got my chance. 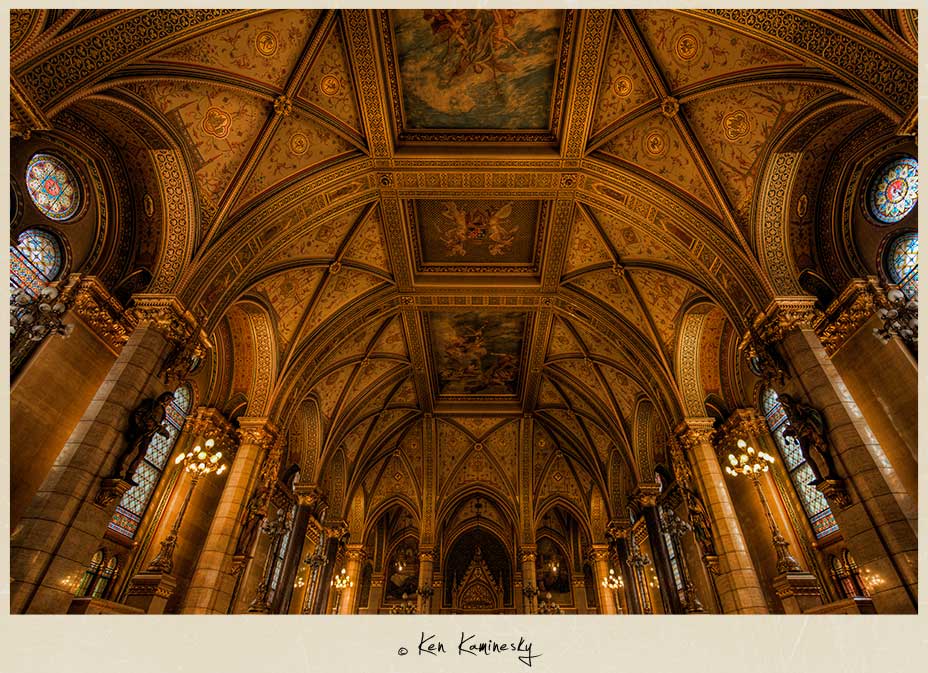 After getting my security clearance and meeting my guide for the hour I was permitted to photograph inside the Hungarian Parliament, I got my first glimpse of the lavish interior. Instantly my jaw hit the floor and I had to take a moment to compose myself. The views progressively got better with each step along the path of the tour I was given. While my official guide barely spoke any English, I think he could quite clearly see by the look on my face, just how blown away I was. Of course “Wow!” seems to be a rather universal word and well understood in so many of the places I visit, and this was a wow worthy place indeed. 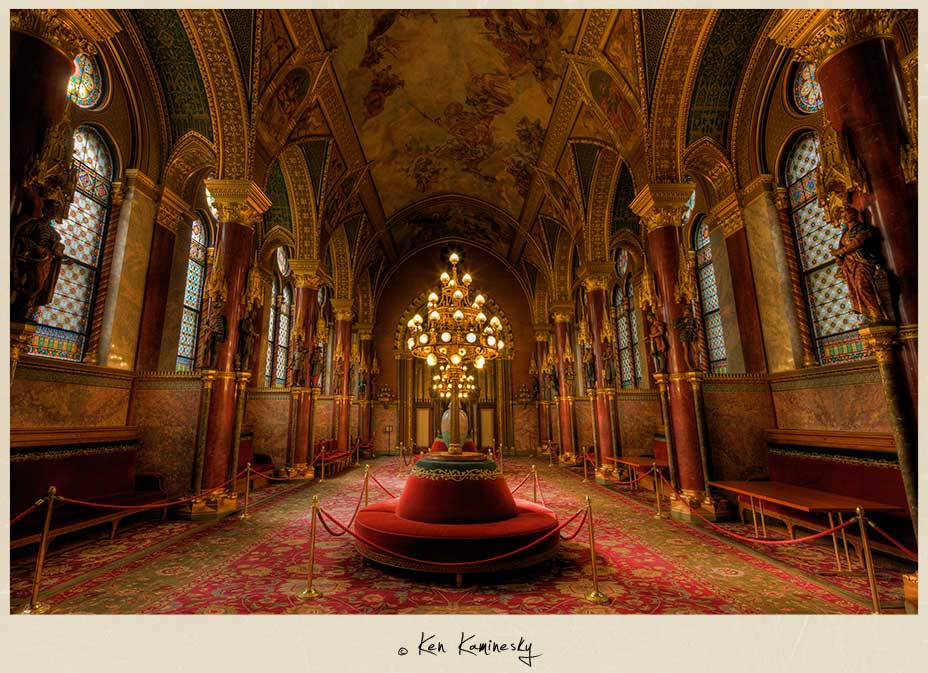 “He who has the gold makes the rules.”
~Tyler Perry

The construction of the Parliament building began in 1885, inaugurated on the 1000th anniversary of the country in 1896  and in 1904 construction was completed. 40 million bricks were used in the building process as well as half a million precious stones and 40 kilograms (88 lb)  of gold! That’s about half a million precious stones and 40 kg of gold more than was used in the construction of my apartment. Inside the building there are 10 courtyards, 13 passenger and freight elevators, 27 gates, 29 staircases and 691 rooms. 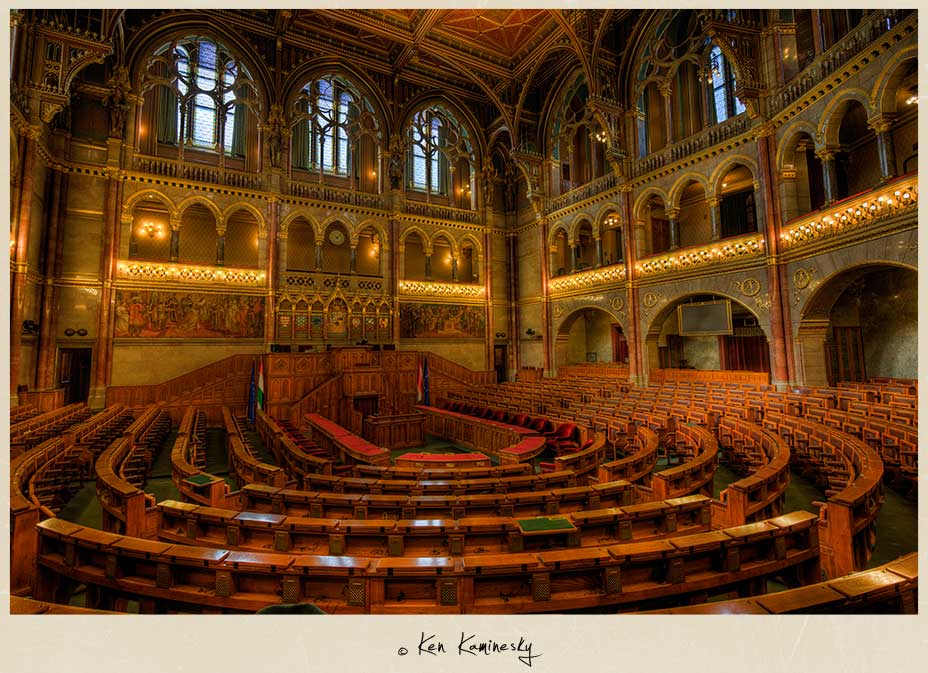 Chamber of the Lower House of the National Assembly of Hungary

“Politics is too serious a matter to be left to the politicians.”

It’s funny that we so often complain about or even loathe the politicians we elect to govern us, yet we seem to build them palatial buildings to work in and pay them well above what they are worth. I love the architecture and intricate designs in these buildings though and I do realize that it is a matter of national pride to have parliaments, senate and congress buildings, city halls and other government buildings look as good as they do. It makes for some rather wonderful photographic subjects as do the cathedrals, mosques and temples of major religions, imperial and royal palaces, and lavish concert halls. 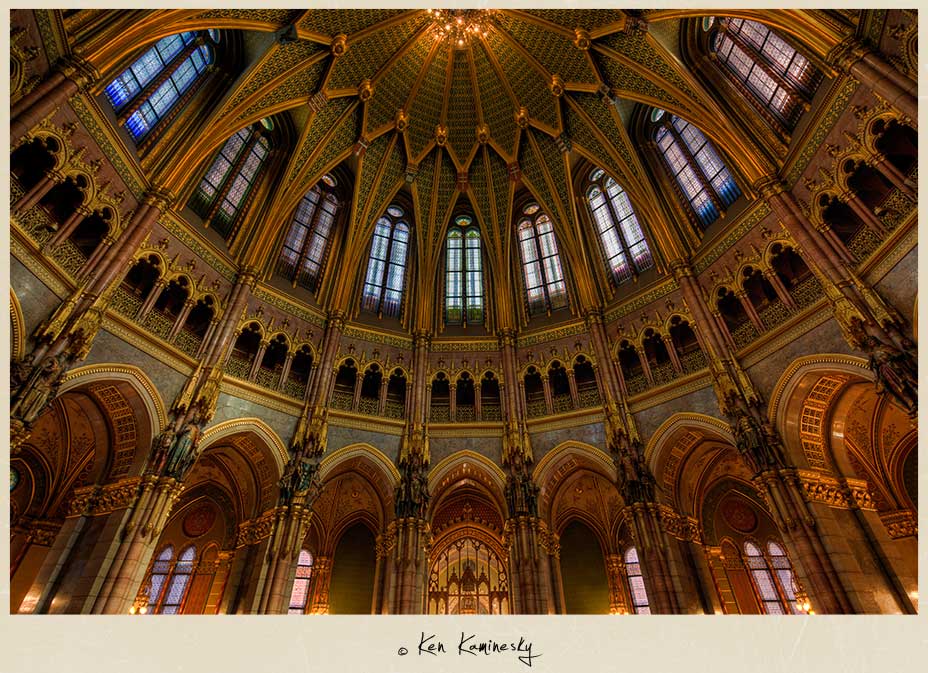 Central Hall ceiling under the dome

As my time was winding down I was brought to the central hall where they have the The Holy Crown of Hungary (also known as the Crown of Saint Stephen) on display. This was the coronation crown used by the Kingdom of Hungary for most of its existence and in Hungarian history over 50 kings were crowned with it. The Holy Crown of Hungary, like all European Christian crowns symbolizes a halo and designates the wearer as a ruler by divine right.

The crown was supposedly created during the reign of Béla III under Byzantine influence but there are many differing theories about this “fact”. Most of the legends surrounding the crown’s origin revolve around the coronations of  Stephen I, the first king of Hungary. King Stephen’s (who would later be canonized Saint Stephen) coronation would mark the beginning of Hungarian statehood. The date of his coronation is given as either Christmas day of 1000 AD or January 1, 1001 AD. 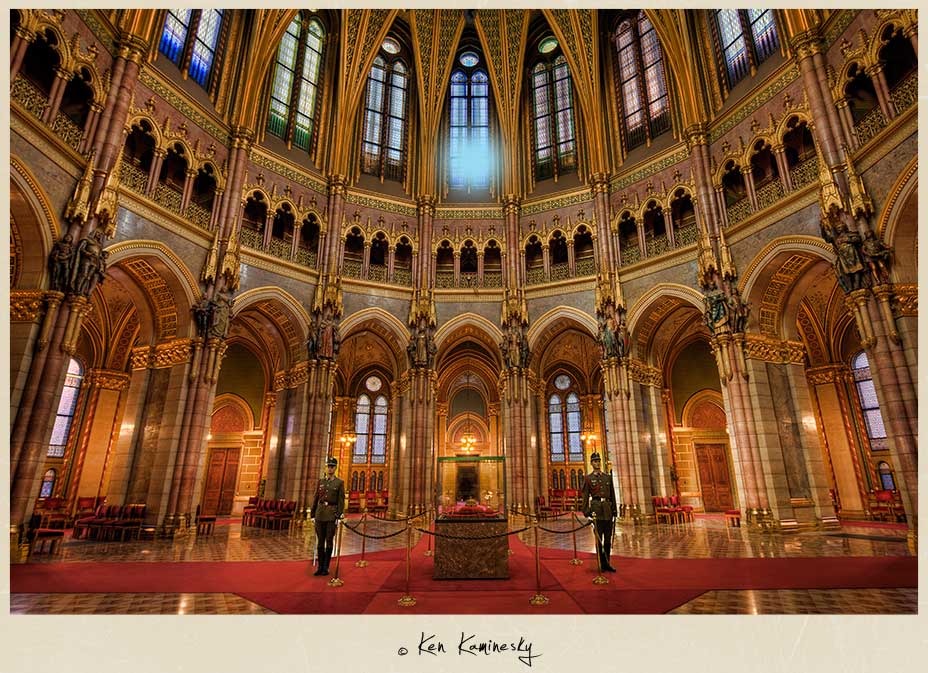 Guards watching over the The Holy Crown of Hungary

I knew that I had some pretty special photos when I departed from this amazing building and it was fun to work on them after a few months of having the files beckon me from the hard drive where they reside. One of the curses of doing this kind of work is that it often takes me a long time to finally process the images I take, simply because there are so many. Where do I begin? Which photos are the priorities? The easy answer of course if I always finish any commissioned photos and then make my decision based on possible stock photography use, fine art possibilities and interesting historical facts or stories that may lead to an interesting blog post.

Most of the interior photos that I take like these require special permission, planning, cutting through red tape and even a bit of good luck. Even working with tourism boards does not guarantee you access to many places. I’ve been turned away from several amazing locations even when I had local and national tourism boards make requests on my behalf. It can be quite frustrating to travel so far to take photos of incredible locations only to be turned back at the last moment. This of course makes it so much more special, when everything goes right and I get to do what I love best; to take photos of places that inspire me (and hopefully a few others as well). With that inspiration and sixty minutes, I was able to get these photos and a whole lot more. I’m looking forward to the next hour that I can spend like this and hope to see quite a few of those hours in 2012.

« The World-Famous Spanish Riding School in Vienna
Saying goodbye to Austria, Hungary and Germany at the Munich Airport »