Wreaths Across America at Arlington Cemetery 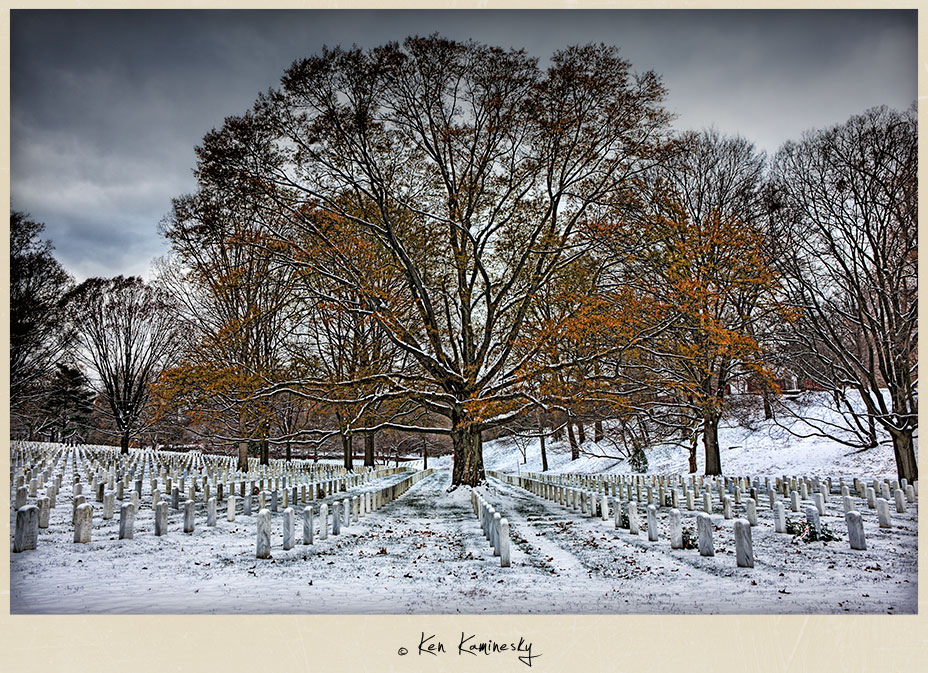 “If you don’t know where you are going, every road will get you nowhere.”

As I was driving from Montreal to Washington DC last December it began to snow almost as soon as I crossed the border into the US. Seems like snow follows me wherever I go and in this case it began the day I left home and continued until the day I returned home a month later from New York City. Road trips can be fun and I find they allow me the opportunity to reflect on a much of what is going on in the world and in my life.

Once I approached Syracuse the snow began to fall with a vengeance. It was a total whiteout and I could literally not see the car ahead of me, just the back lights. This left little time for reflection on life the universe and everything, and I was scared that I’d end up in a giant pile up on the first day of my month long trip. Just as I made the decision to take the next exit on the highway (if I could see it), the sky went from white to beautiful blue within a few seconds. It was one hell of a snow storm and an incredible relief to leave it behind me. Or so I thought. The storm came back moments later and once again I was trapped in this insane whiteness, wishing that I had actually taken the exit when the visibility cleared up.

I didn’t know that the storm would follow me to Washington DC, but it did, even if it took a day to catch up to me. 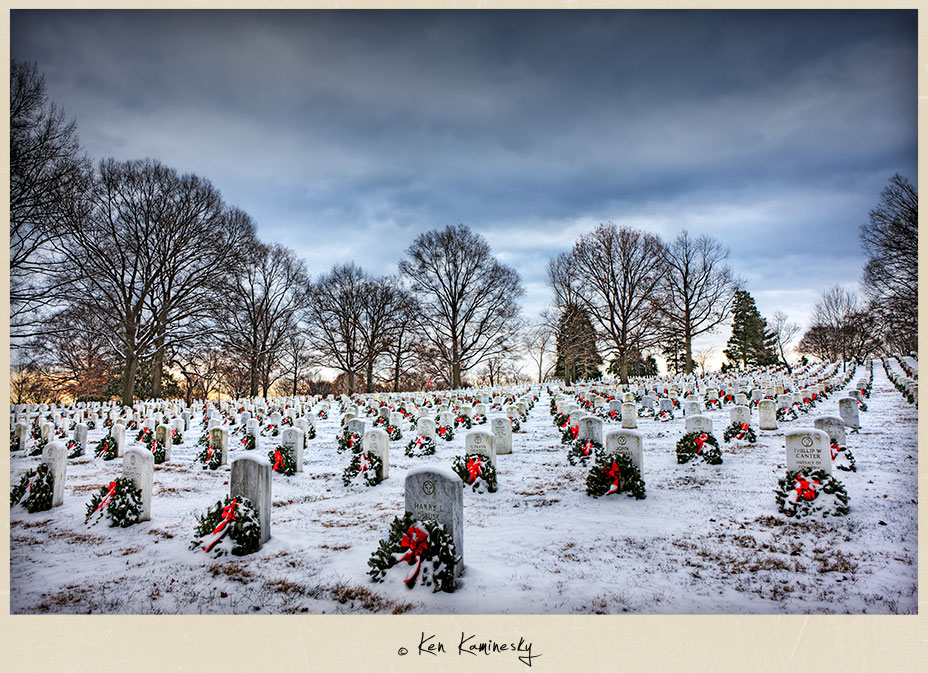 Kindness is like snow – it beautifies everything it covers

It was dark when I got into town and as I approached my hotel I was looking forward to a hot shower after the 11 hours of driving in some rather unfavorable conditions. Lucky for me the desk clerk at the hotel was a fan of Mini Coopers. He was a tall guy and not convinced that he could be comfortable in the car, so after letting him sit in the drivers seat to get a feel for how roomy the little car is on the inside, he was smiling like a Cheshire cat. He also upgraded me to a room with a whirlpool tub, just what my aching back needed!

As I checked my emails that night I saw one from my mom with the title: “You have to see this!”. Like a good son, I opened the email to find a touching story about the man from Maine who donates 5,000 Christmas wreaths a year to be laid on the graves of soldiers at Arlington National Cemetery. There was a link to an article and several photos. It was touching and I immediately made a note to plan a visit to Arlington Cemetery while in DC. I even remember thinking what a nice photographic tribute it would be to the soldiers and how beautiful (yet melancholic) it would be to have these scenes with a fresh blanket of snow covering the ground.

The next morning I woke up to blue skies and headed into the National Mall area to begin photographing all the iconic monuments and landmarks. After a few hours I had photographed the White House, The Treasury building, the Washington Monument and the Jefferson Memorial. And then the snow began to fall. Be careful what you wish for.

On my walk from the Jefferson Memorial to the Lincoln Memorial it began to snow so hard that I could barely see anything but white again. I got totally soaked and had no choice but to head indoors to some of the amazing museums that you’ll find in Washington DC. My wish for snow had come true and knew exactly where I’d be at first light the next morning. Now I was wishing for just the right amount of snow and for it to stop snowing by morning. 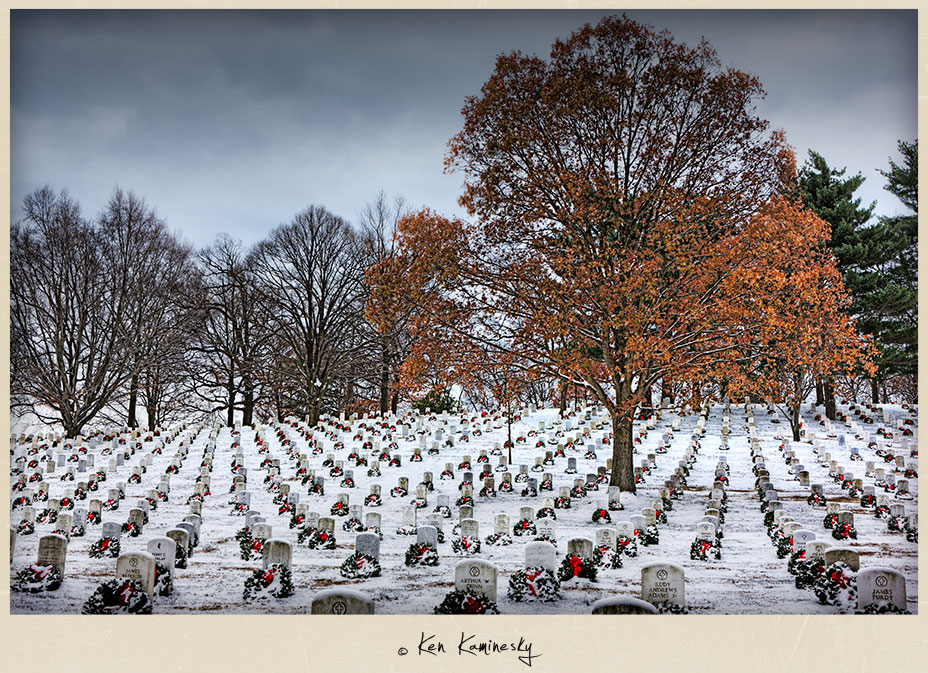 “When the power of love overcomes the love of power the world will know peace.”

The wreaths are donated each year by Morrill Worcester, owner of Worcester Wreath Company of Harrington, Maine. In 1992 the company had a surplus of wreaths at the end of the holiday season and with the help of a Maine senator and many volunteers plans were made to deliver the excess wreaths to Arlington National Cemetery and have them placed on graves in the older less visited areas of the cemetery.

Today the wreaths have become a nationwide  tradition and donated wreaths commemorating Army, Marines, Navy, Air Force, Coast Guard, Merchant Marine, and POW/MIA can be found at over 600 locations across the United States. In 2011, Wreaths Across America will help organize a volunteer force of 150,000 people,  place over 400,000 wreaths in cemeteries in all 50 US states.

I was touched when I first read about this story and glad that I had a chance to witness the sight first hand. It is wonderful to see how someone with a big heart can affect so many people in a nice way. This all began with one man and the idea grew into a phenomena that has spread all across the United States. As I walked past row after row of grave markers and wreaths, it was nearly impossible for me to imagine that beneath each one lied the remains of a soldier, most of whom died in combat. With the freshly fallen snow and the beautiful wreaths placed on the graves, it was difficult not to tear up and I had to stop several times to compose myself. I hope that the images I took are a fitting tribute to soldiers all over the world.

When I got home and began going through the photos from my road trip, I was immediately drawn to these images. I hope that they strike a chord with you as well.

To find out more about the story, please visit:

Leaving Arlington National Cemetery, I was reminded of a famous poem that we are taught here in Canada as young children. It was written during the first world war by a Canadian physician and Lieutenant Colonel John McCrae on May 3, 1915 , after he witnessed the death of his friend the day before. In Canada, we still to this day wear poppies on our lapels as a tribute to veterans on Remembrance Day (November 11th).

In Flanders fields the poppies blow
Between the crosses, row on row,
That mark our place; and in the sky
The larks, still bravely singing, fly
Scarce heard amid the guns below.

We are the Dead. Short days ago
We lived, felt dawn, saw sunset glow,
Loved and were loved, and now we lie,
In Flanders fields.

Take up our quarrel with the foe:
To you from failing hands we throw
The torch; be yours to hold it high.
If ye break faith with us who die
We shall not sleep, though poppies grow
In Flanders fields.