The Most Beautiful Library in the World 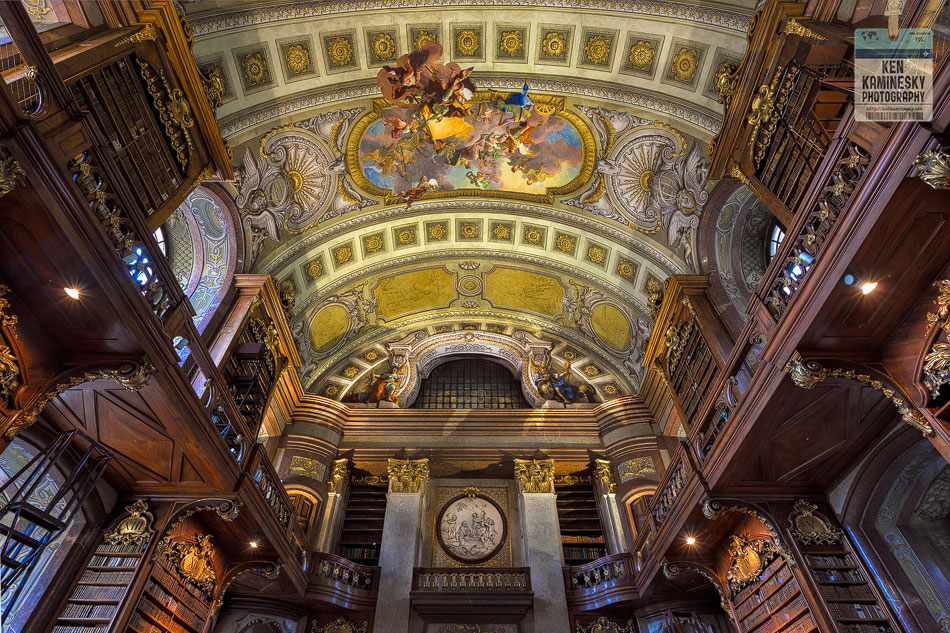 With over 7.4 million items in its collections, the Austrian National Library (German: Österreichische Nationalbibliothek), is the largest library in Austria. It may also just be the most beautiful library in the world. Of course that’s all very subjective, but I think you’ll agree after seeing these photographs that this is one incredibly stunning place.

The Austrian National Library’s collections include everything from ancient texts written on papyrus, maps, paintings, manuscripts, ancient and rare books, photographs (yay!) and even works in Esperanto.  The library resides inside the Hofburg Palace which was home to the Habsburg dynasty that ruled the Austro-Hungarian empire. Actually it was their winter home. the Schönbrunn Palace was where they spent their summers, and I can tell you that the Schönbrunn is not to shabby a place either. I’ll have Schönbrunn photos to share in an upcoming blog post. 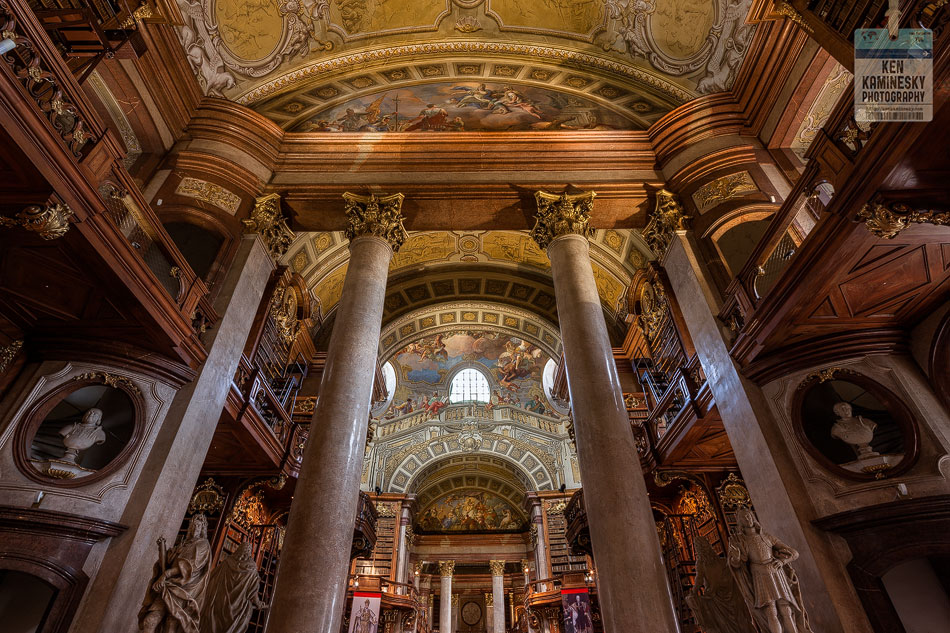 Not your typical public library

Inside the Österreichische Nationalbibliothek

Hope you have some time to spend at the library, you’ll need it in order to see the following: 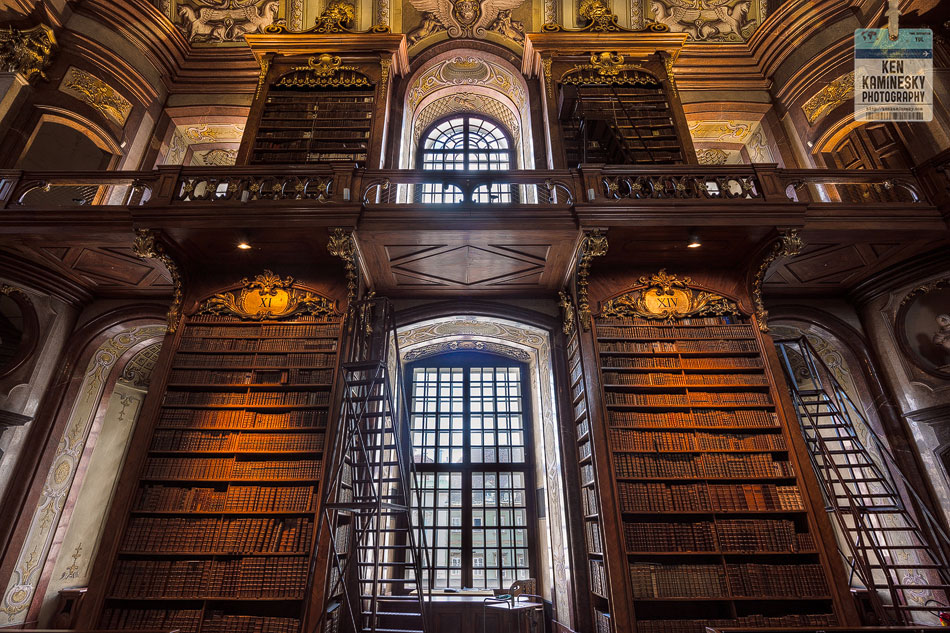 The book I want is on the top shelf… Murphy’s Law!

A City fit for a King… Or Emperor

Vienna is a majestic city, pun intended. There are so many incredible palaces and other buildings that were built during the Habsburg dynasty, that it was literally impossible for me to begin to cover the ground that I wanted to during my short visit. Take the Hofburg Palace for example, I got lost three times while looking for the Austrian National Library and I was already inside the palace!

From the outside, the Hofburg is not easy to photograph, it’s just too huge and lies in the middle of the city, surrounded on some sides by parking lots and in other places is obstructed by other buildings. If only I had a helicopter, all my troubles would be over. Well okay, not ALL my problems, but it would be a good start. So if anyone has a spare helicopter lying around that they don’t use any more, I’ll take it off your hands. 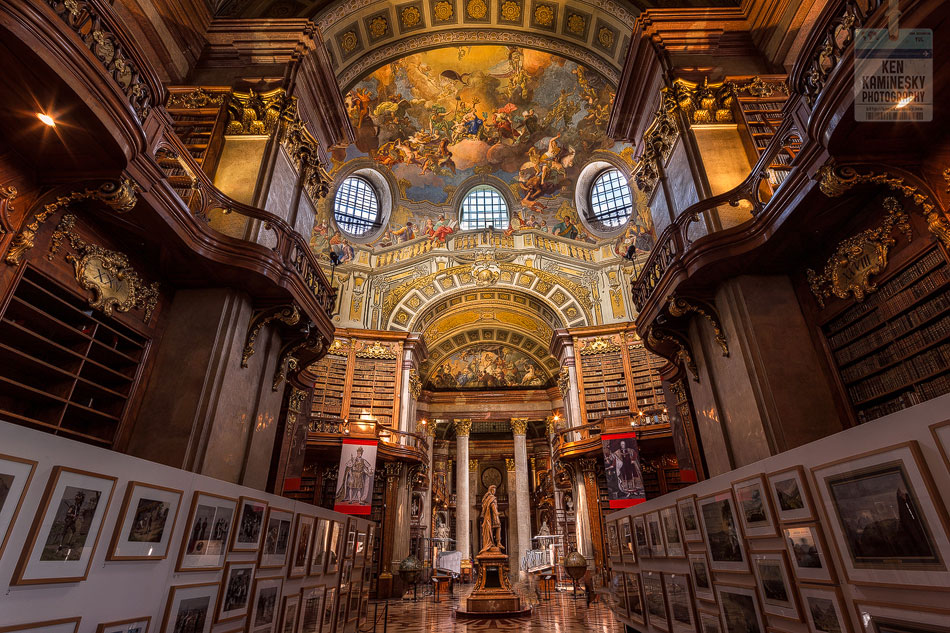 Art exhibit at the Nationalbibliothek

Should I stay or should I go?

While I thought that I had gone through the right channels to get the permission to photograph inside the  Austrian National Library, I was to find out quite the contrary upon my arrival. I had a permission letter from the Austrian National Tourism Board and a letter from the Vienna Tourism Board to show to anyone in authority should there be any issues at any of the locations I was going to photograph. The person I was dealing with at the Vienna TB had also called ahead to advise the powers that be, that I’d be there to take photos. Everything seemed to be in order.

After finally finding the right place, I was eager to get to the library and start taking my photos, yet that would not happen any time soon. I asked in at least five places who I was supposed to talk with to get access and I was always sent to some other department. I take some of the blame on this since I do not speak German and it really is not the responsibility of anyone in Austria to speak either English or French so that I can be understood. Finally I was told to wait and that some one would meet me shortly…………………………

Shortly turned into almost an hour and finally just as I was about to give up and leave, I was met by 2 very nice administration people who ended up asking a million questions, making me sign forms, fingerprinted me, took a blood sample, retinal scan, take a full body x-ray and swear to god, hope to die & stick a needle in my eye if I ever use the photos for anything other than editorial use. Okay, I may have exaggerated a tad, but sheeesh! People, people, people… These are nice photos of a beautiful place, it’s not like I’m gonna use them to invade some country for it’s oil reserves. I’m Canadian! ;)

I truly find it baffling why it is such a big deal to take nice photos of a place where hundreds of thousands of tourists visit each year, and take marginal photos with their cameras that they don’t know how to use. This is ok, yet taking the time to do some good photography that makes a place look attractive to potential visitors is frowned upon. Sigh. What is most frustrating for me is that I could be out getting some other photos taken rather than sitting waiting for some official to come and meet me AFTER I had already made arrangements. 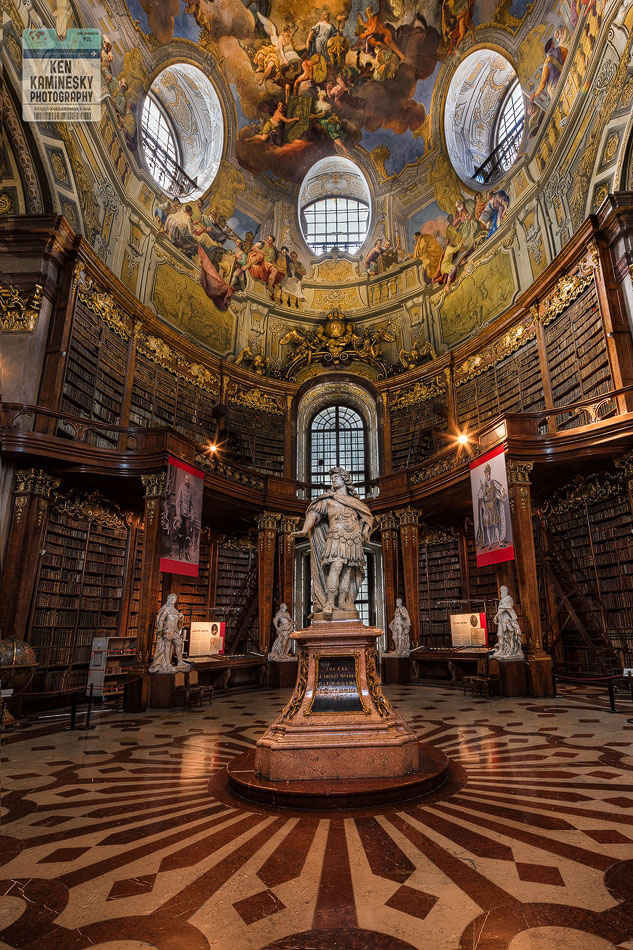 Enough of the bitching, this place is spectacular!

I could have spent a whole day getting detail shots as well as the wide angle views I’m sharing here. Sadly, time is always an issue for these types of shots, and I just consider myself lucky to have had the opportunity to get as many photos as I did. Lucky again to find that there were not a whole lot of visitors in the library while I was attempting my photos. This made it a lot easier in the post production process s there were just the odd one or two people I had to erase from the photos. 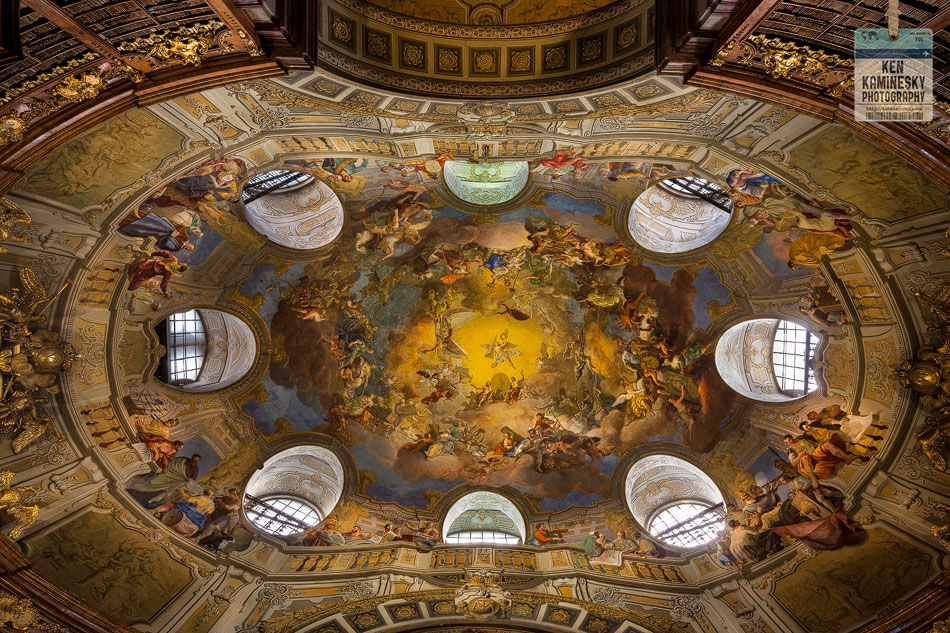 Much like my living room… The fresco in the central dome

The Devil is in the Details

Everywhere I looked there was a new opportunity for another interesting photo and looking up at the ceiling under the central dome was mesmerizing to say the least. The details are just incredible and it is easy to get lost as your eye jumps from one part of the fresco to the next. Thanks to a good resolution file from my camera I’m able to get close enough to really see all those details up close. It’s impossible to see such detail with the naked eye, but it is quite the experience to just stand there, neck craning up towards the heavens in absolute awe of the beauty that lies right there in front of you. Bravo to the brilliant artist Daniel Gran! 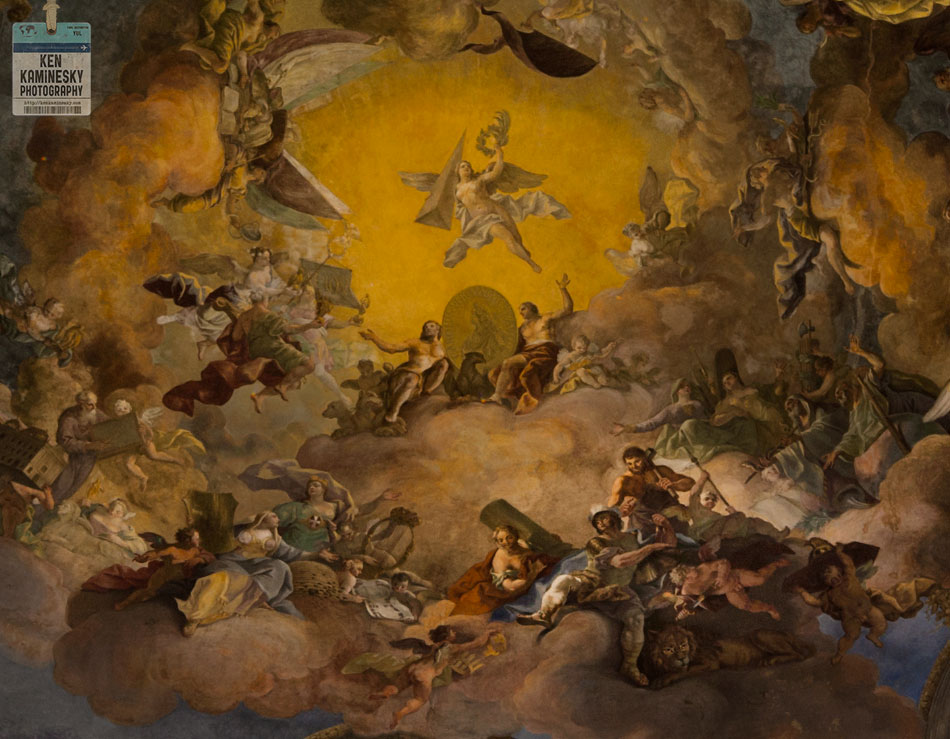 Detail of the fresco in the central dome

There’s time enough, but none to spare!

I knew that I would not be able to take all the photos I wanted, so I got what I thought were the most important images and thanked my guide from the administration who was very nice to me by allowing me to spend quite some time doing my thing. I’m so glad that I stuck around long enough to finally be met by the administration people. I was so close to leaving and missing this wonderful opportunity to photograph one of the most beautiful places I’ve ever seen. Timing is everything, or at least it sure is something! 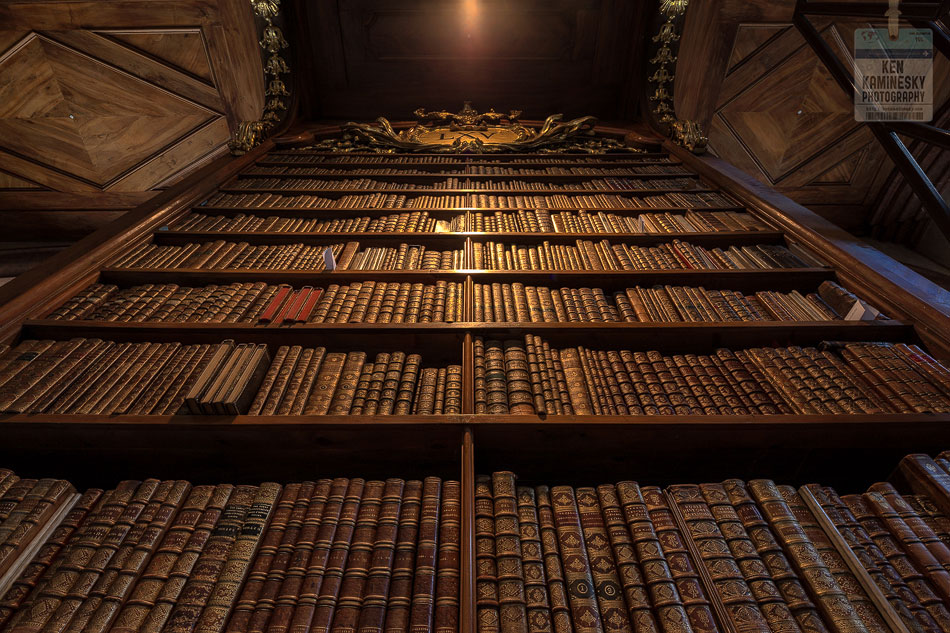 “There is no friend as loyal as a book.” ~Ernest Hemingway

Thanks to AirBnB for hosting me in Vienna. I stayed at a great apartment with delightful hosts who were very helpful. I was centrally located and 2 blocks away from a tram station, from where it took 10 minutes to get into the historic centre of the city. Great big room, friendly hosts, safe location and priced to fit a tight budget, it was an ideal place for me to stay.

Check out the AirBnB website to see what you’re missing, you’ll be glad you did.

« The Glimmering Sights along the banks of the Danube in Budapest
My Marketing Adventure: Part 2 »