The Ancient Greco-Roman Ruins of Historic Jerash in Jordan 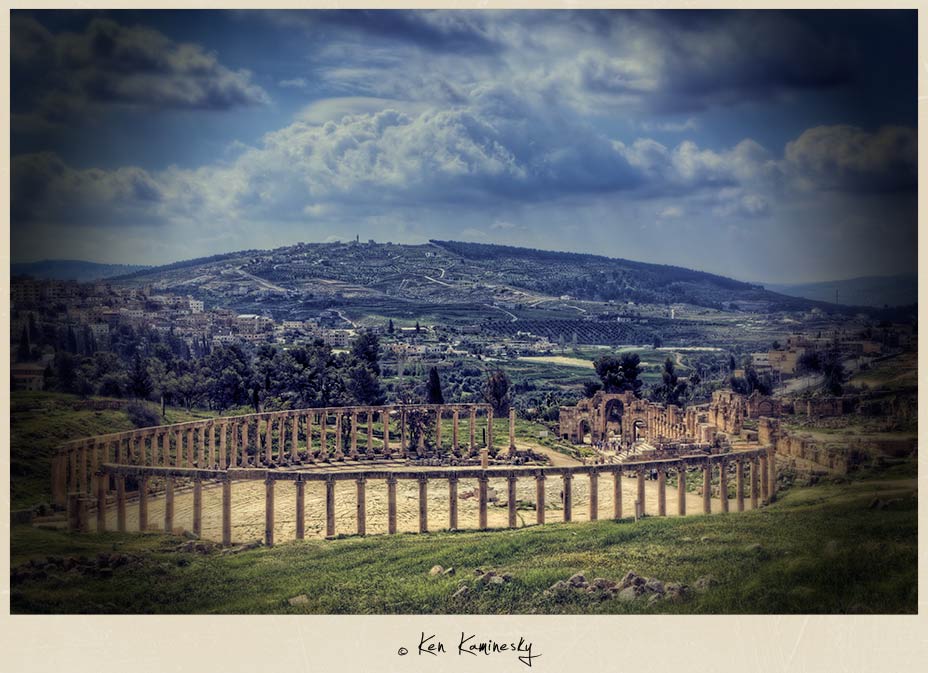 The Decapolis of the Roman Empire 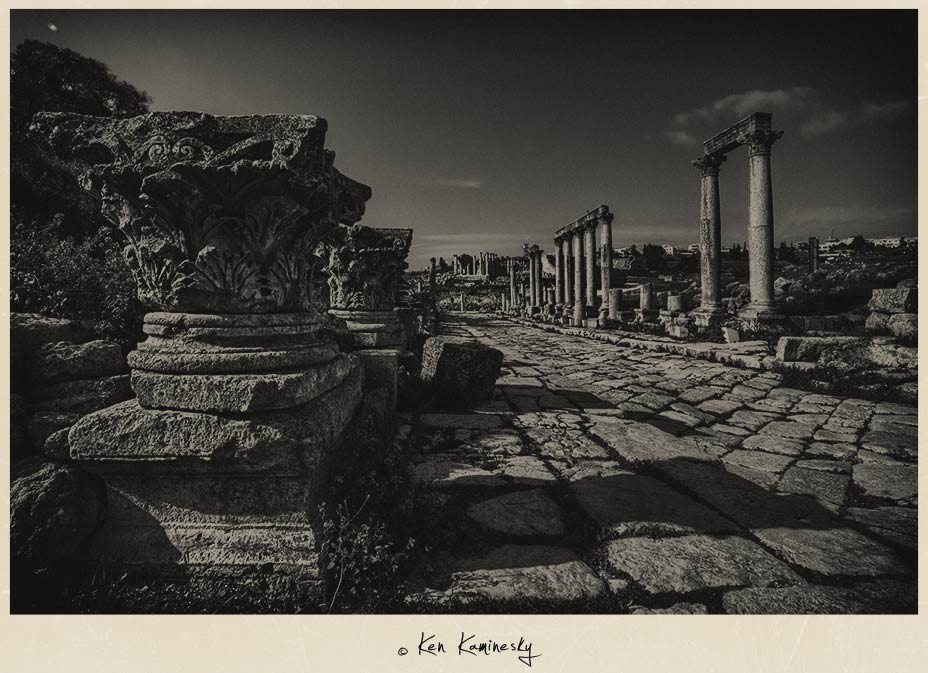 Meanwhile back in Neolithic times…

Excavations in these Greco-Roman Ruins have proven that human beings have inhabited the area that Jerash occupies for well over 6, 500 years now. Thousands of years later we are left with some of the best preserved ruins from the Roman Empire outside of Rome itself. Walking around the ruins transported me into my imagination and I felt like a child, daydreaming about days gone by. I was thinking of what it must have been like during the time that the structures in front of me were not ruins, but rather an impressive and vibrant city alive with the sounds, smells, and sights that must have been absolutely extraordinary.

You can still see the chariot wheel tracks in the cobblestone streets like in the photo above and there are still other structures and massive mosaics in some of the buildings that are being excavated, giving you a sense of the way life was lived all those centuries ago. Some of the buildings like the south Theater are quite well preserved and restored, while there are others that leave a lot to the imagination. In some cases you can see piles of stones that have been dug up and are waiting to be put back together like a giant puzzle. This painstaking work takes a lot of effort, time and money, as well as the dedication of archeologists that specialize in this sort of thing. Just from walking around the old city for a few hours, I could see that there were a lot more areas that were just begining to be worked on and I’m excited to learn what other treasures are found in the years ahead. 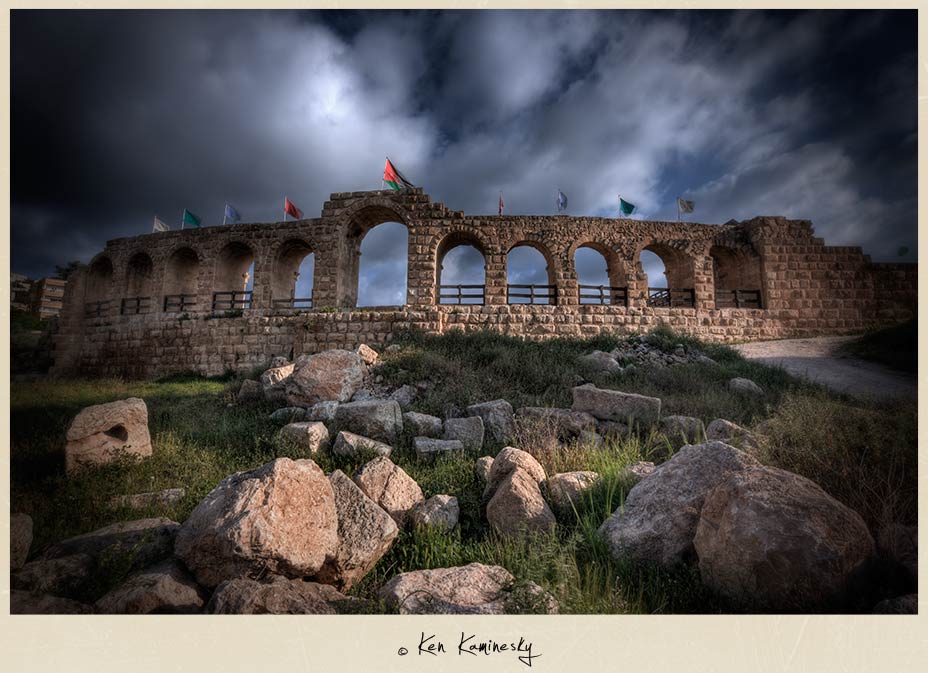 One of the things to do at the historic site of Jerash is watching the reenactment of the chariot races, military processions and gladiatorial games in the Hippodrome. Once again my imagination took control, pondering what it would have been like to attend a real spectacle when the Hippodrome was in its shining glory back in the third century AD. At 245m long and  52m wide there was ample seating for close to 15, 000 spectators.

The Circus (or Hippodrome) was originally constructed during Emperor Hadrian’s rule between the years 117-138 AD. Excavations show that it was built over an earlier Greek style race track. In many places in the old city of Jerash you can see where the Romans built on, over, or expanded the earlier work of the Greeks, who built their streets and buildings centuries before the arrival of the Romans. 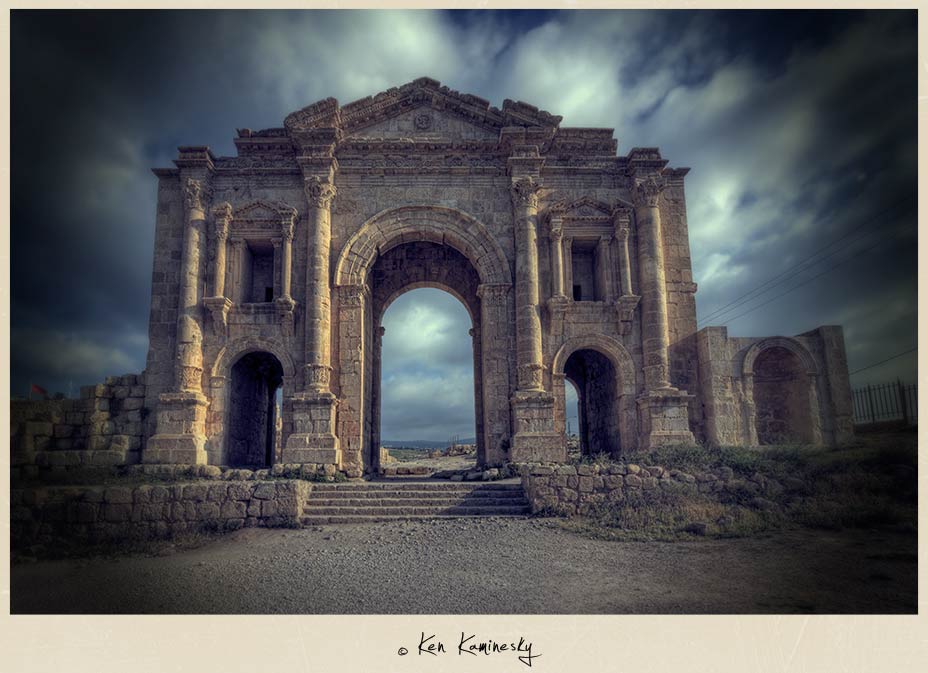 Hadrians Arch at the entrance of Jerash

The Arch of Hadrian (pictured above) was buit in 129AD to honour the Emperor for visiting the city of Gerasa. Hadrian and I seem to have at least 2 things in common. We both ruled over vast empires, were adored by our people, and controlled massive armies that would follow us in to battle and follow our every command without hesitation. Hadrian in reality, and me in my dreams. ;) Secondly and most importantly, we both love to travel! During his reign Hadrian visited every single province in the Empire. With an empire that stretched from northern England to Egypt, that involved a lot of travel! 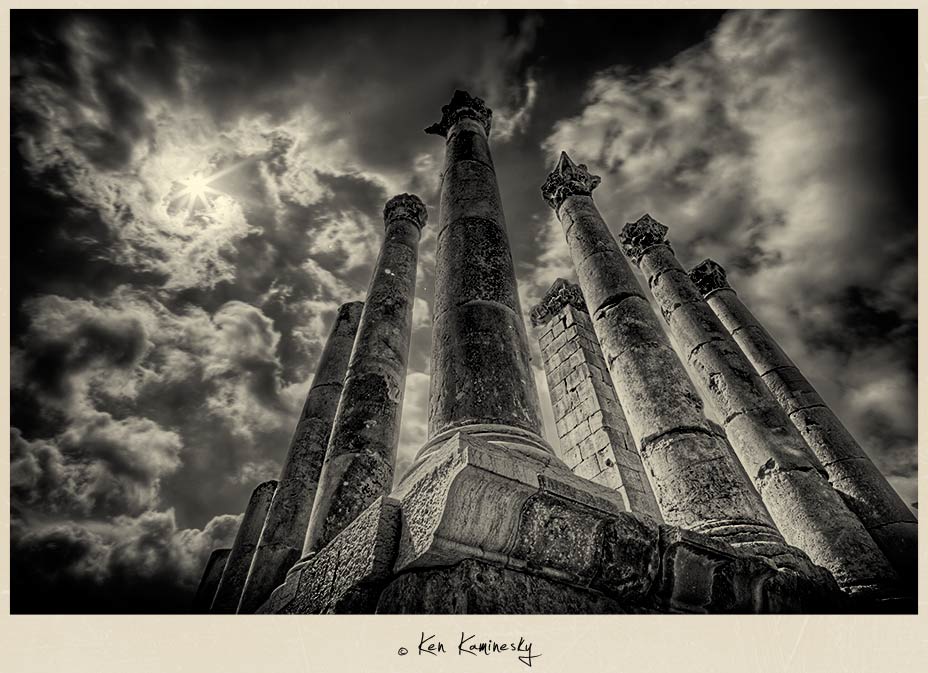 The ancient city of Jerash reached a size of about 800,000 square metres within its walls. Within those walls many of the more elaborate buildings that were constructed were donated to the city by it’s wealthiest citizens. Seems that some of the wealthiest of our citizens today could take a lesson from that page in history. We always seem to read the history that tells the tales of wars and the darker times in human civilization, so I find it refreshing to read and hear the stories about kind, generous people from ancient times.

Throughout it’s history, Jerash’s population rose and declined with many different factors affecting the growth of the city. Persians invaded in 614 AD, there was a major earthquake in 749 AD, and during the Crusade years much of the city was converted into fortresses. All of these events changed the face of the once flourishing city, but the people of Jerash were a resilient group. There still were settlements in Jerash until the Ottoman period and since the 1920’s the whole area has been under excavation and new archeological discoveries are still being made. 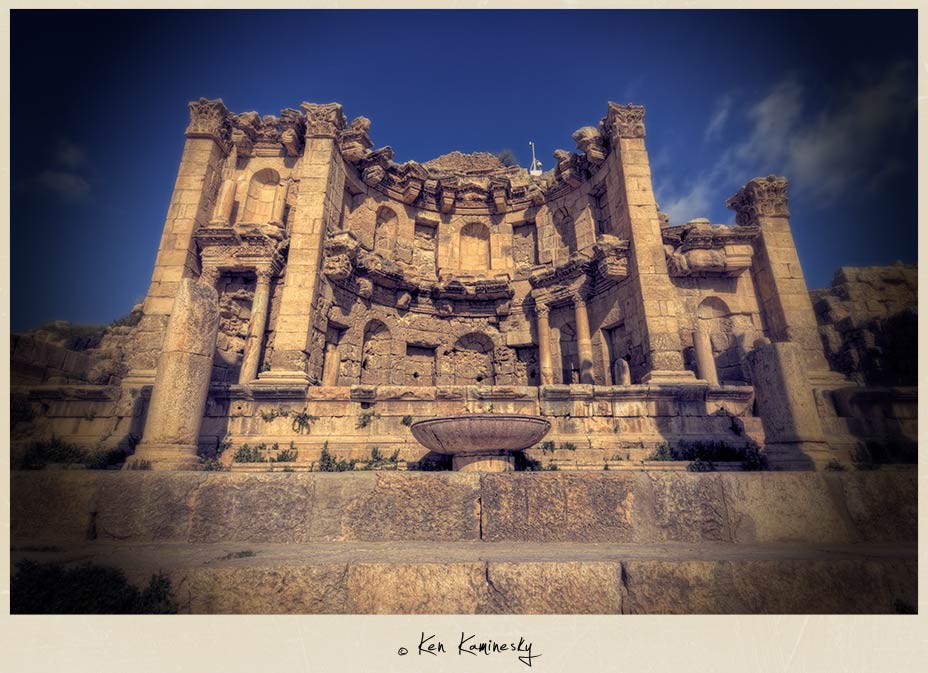 To get the best experience in Jerash I would highly recommend hiring one of the official guides from the site. While Khaled, my intrepid host from the Jordan Tourism Board , was very knowledgable about the history of the country, it was nice to get a guide who had so much detail to share with me about Jerash. At time it was a bit overwhelming since I was trying to concentrate on taking photos and listen to the interesting history lesson I was being given. My Jerash guide did a great job of keeping us entertained and informed, he had a great sense of humour and took extra time for me to be able to get my photos.

Be prepared to spend several hours touring the ruins in Jerash, it’s worth taking your time, especially if you’re a history buff. Stay hydrated and wear sunscreen as there is very little shaded areas. 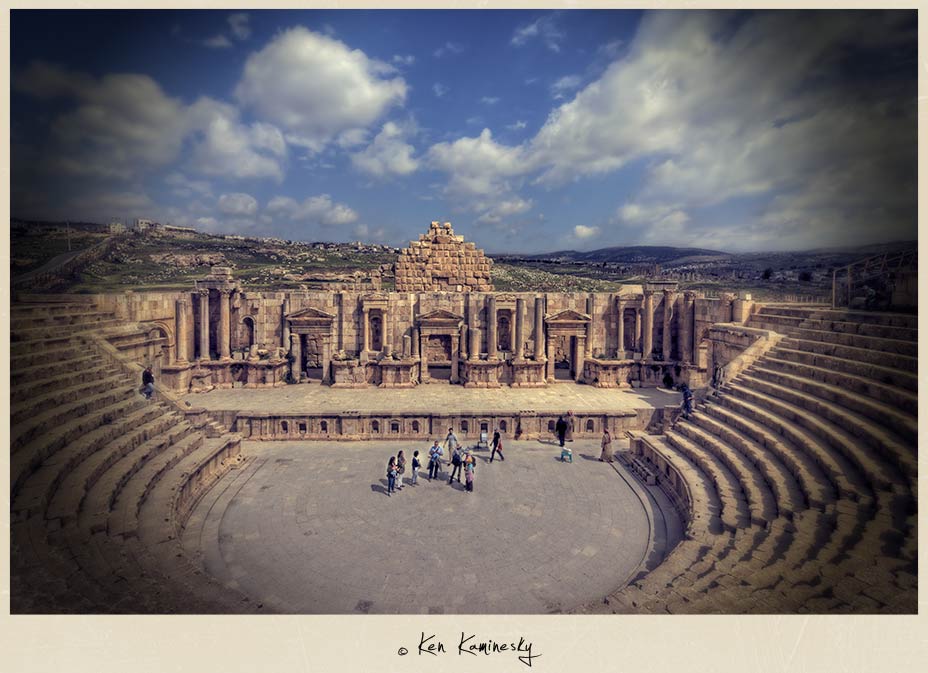 I was expecting some great things from Petra, Wadi Rum, and the Dead Sea and they sure did not disappoint, but Jerash was that unexpected treasure that I just love finding on my travels. I feel fortunate to have had such great support from the Jordan Tourism Board on the trip around the country, I learned a lot about the culture and history of a place that I must admit I knew little about. 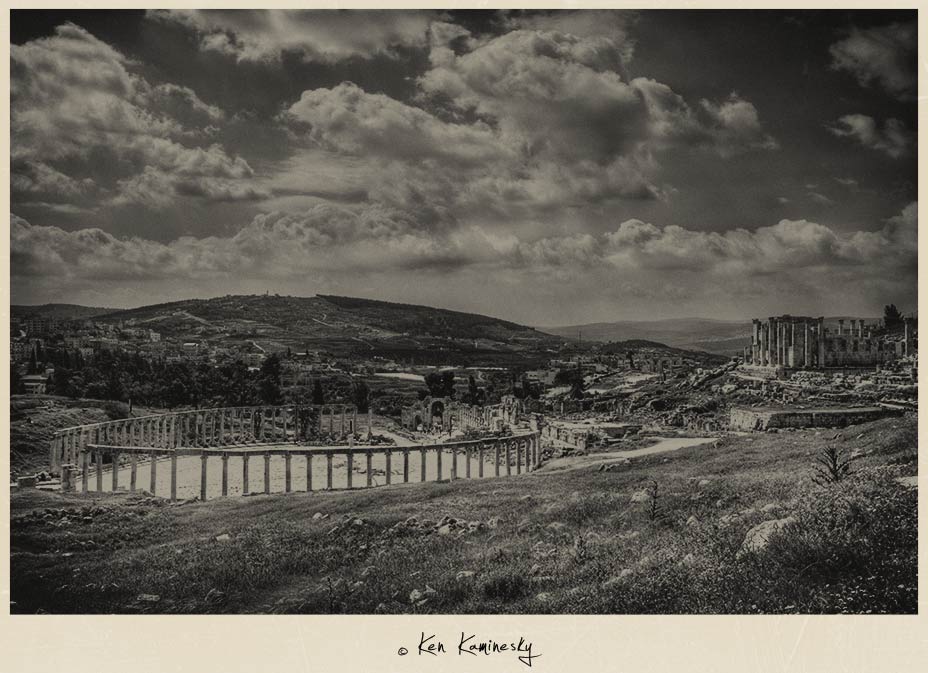 One of the best parts of my job is getting a chance to explore so many incredible places and it makes me thirst for more adventures. I hope that I can get back to Jordan one day to continue exploring this fascinating part of the world that is so rich in history and culture. I feel like I just got a taste and I’m now eager to get a second helping. I think you’ll feel the same way when you go to Jordan. 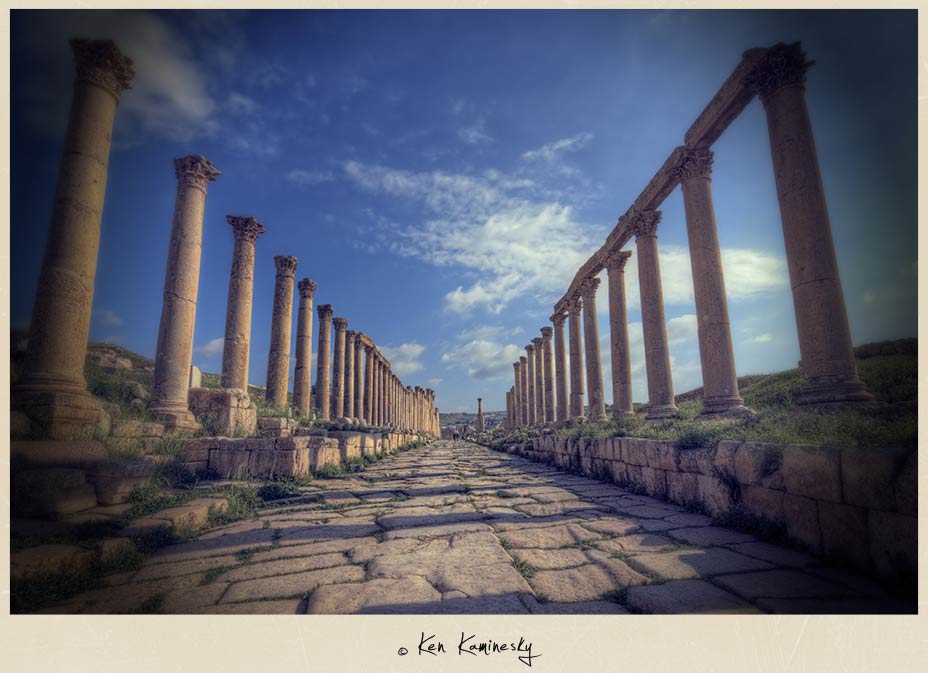 The main colonnaded avenue in Jerash

My gratitude to the team at Royal Jordanian for getting me to Jordan in style!

Flying Crown Class is a little slice of heaven… Thanks RJ!