Shipwrecked on a Fraser Island in Australia

The Wreck of the SS Maheno on Fraser Island 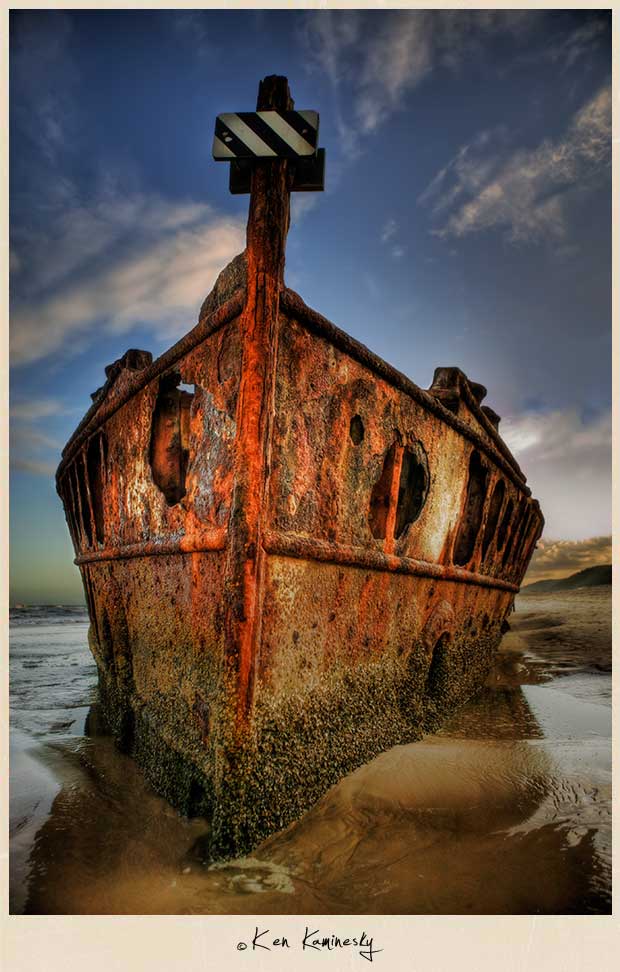 I said Maheno… not Minnow, so don’t go looking for Gilligan, the Skipper, Ginger or Marianne

Just sit right back and you’ll hear a tale,
A tale of a fateful trip
That started from this tropic port
Aboard this tiny ship.

Fraser Island was quite the highlight of my trip to Australia a few years back and I have a lot of fond memories from my brief stay on the island. If you ever find yourself planning a trip to Australia, especially anywhere near Brisbane or the Sunshine Coast, then do yourselves a favour and plan a few days on Fraser Island. Located on the southern coast of Queensland, the 120km long and 24 km wide desert island is the largest island in the world made completely of sand. That in itself is remarkable, yet that is just the beginning of what makes Fraser Island so interesting and beautiful.

What exactly makes it such a special place?

The Only Place on Earth

Yup, I said rain forest, and the trees and other plants grow directly in the sand. You wouldn’t think that such huge trees could grow in sand, but thanks to the naturally occurring mycorrhizal fungi present in the sand, plant life is incredibly abundant. This is the only place on the planet where tall rain forest grows in sand. There are also a number of mammals and birds that inhabit the island, including sugar gliders, swamp wallabies, flying foxes and the last of the pure bred dingoes in Australia.

The Dingo Ate my Baby!

The dingoes are rare , so I’m lucky to have seen a few of them sauntering down the northern coast of the island. There are only around 150 of them left on the island and sadly the population is quite malnourished. Even sadder is the culling of the population back in the mid 1990’s when a young boy was mauled and killed by the dingoes when he wandered away from his family. It is said that almost half the population of dingoes was killed by rangers after the incident. Many tourists have been known to try and provoke the animals to get a reaction out of them for photographs, this has led to a few biting incidents recently, but the idiots who provoke wild animals have no one to blame but themselves.

The island has been inhabited by humans for over 5000 years, but today the permanent population is restricted to around 350 people. There are only a few hostels, resorts and hotels on the island so if you’re planning a visit, be sure to book well in advance. Getting around Fraser Island is an adventure all on it’s own. The only way to see the island is to rent a 4 wheel drive vehicle like a Land Cruiser, and trust me you need to know how to drive it in the sand or you will get bogged down. Driving slowly in the rain forest is a very bad idea, unless your idea of fun is to spend hours digging your vehicle out of the sand, over and over. Even with my experienced guide driving, we managed to get stuck a number of times when we slowed down. So did a few others, and when you see someone who is stuck in front of you, you pitch in and help dig them out. Not only is it the right thing to do, but it may also save you from losing your vehicle to the rising tide.

At the north east tip of the island is where that just about happened to my guide and me, as well as 4 other groups in Land Cruisers. Driving on the west side of the island is a total blast, the sand is hard packed and flat as a pancake. The ocean is rough on that side of the island and makes for a nice sight as you drive along. Fresh water springs can pop out of the sand anywhere, at any time so be careful because where there was no stream yesterday, is where you’ll find a big one the next day. Those streams are big enough to carve out quite a deep break in the sand, so keep your eyes open when driving. You’ll also want to be careful not to drive in the salt water, because that can damage the vehicle in many ways, and the insurance will not cover you!

As we arrived at the only place to access Sandy Cape, we were confronted with a line up of 4x4s all waiting for one group to dig their vehicle out of the sand. The problem was that they were completely blocking the very narrow passage that you are supposed to drive through. There was a lot of cursing, teeth grinding, and muttering under the breath… All coming from me of course. ;) At first no one was helping the people who were bogged down, as someone had just said, serves them right for driving like idiots. Then as we looked back towards the ocean, someone had the good sense to scream: “the tide is coming in… NOW!!!”. Well, you never saw five car loads of people jump so fast, dig so vigorously and push so hard. It was an epic effort I tell ya. The last Land Cruiser drove through with only a few minutes to spare as we all breathed a huge sigh of relief.

After that escapade, my guide and I decided that we deserved a break, in the calm and crystal clear waters off the northern shore. The water was deliciously warm and it felt great to take in some sun and surf. In the distance we could see what I assumed were sting rays swimming around, it was a moment that I’ll never forget, one of those ahhhhh moments that I really cherish. Sadly that moment lasted a very short while. I asked my guide for the keys to the 4×4 and he made motion of checking his swimsuit pocket. After what seemed like a long time his facial expression went from smiling to very concerned, at this point I got a sinking feeling in my gut. He then swore and proceeded to let me know that he must have dropped the key in the sea! My reaction was not good, and following his expletive filled lead, I said: “What the fuck do you mean you DROPPED it?” After this reaction he burst out laughing and told me to relax, he was just kidding. I could have killed him at that point, but that is when he actually did look for the key… Only to find it missing for real this time. After spending 20 minutes diving underwater to see if he could find the key, we gave up, just in time to notice that the Land Cruiser was parked pretty darn close to the water. Wouldn’t you know it, the tide was coming in here as well. Sigh.

There was no cell phone reception, and no way to move the vehicle. We were screwed, as I would be on the hook for a rather new 4×4. When you rent the Land Cruiser, they tell you that insurance does not cover the vehicles if they get swept up by the tide, or if they find traces of salt water on the engine. There really was precious little time to waste, but who could we turn to? What could we do? At the apex of my panic, out of nowhere appeared a park ranger. This was too good to be true, or so we hoped. Fortunately he had a walkie talkie and was able to contact the rental company, who let us know that there was a spare key in the bumper attached by a magnetic box. That night, beer tasted like heaven, the stars seemed to shine just a little brighter than usual, and I had a wonderful dream of  pelting my guide with fresh Australian tree ripened mangoes ;) 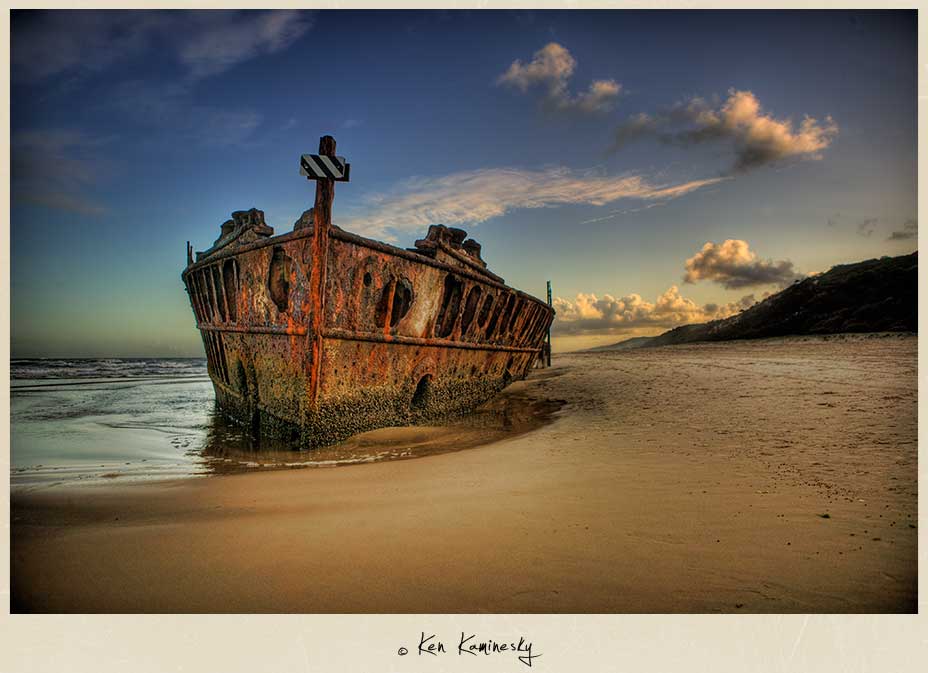 The S.S. Maheno Shipwreck at Sunset

Now, about the The S.S. Maheno

The Maheno (in Maori language means “Island”) was built in Scotland in 1905, and it served as a trans-Tasman luxury passenger ship and as a wartime hospital ship during WWI in the English Channel, Mediterranean Sea, and Galipoli. Ironically, in 1935 the Maheno was deemed to be outdated and was being towed from Melbourne to Japan for scrap metal, when it got caught in a severe cyclone and the tow cable snapped. The ship then drifted until it reached it’s final resting spot on Fraser Island, between Happy Valley and Cathedral Beach. While it may appear small in the photos, the Maheno was capable of accommodating approximately 500 crew and passengers.

During the day you’ll find the ship surrounded by fellow travellers, so as usual I got up bright and early to capture these photos with no one around. Fraser Island was inscribed as a UNESCO World Heritage Site in 1992, and the Maheno is just one of the amazing sights you’ll see there.