Gaudi's Parc Güell in Barcelona... I Can See for Miles and Miles 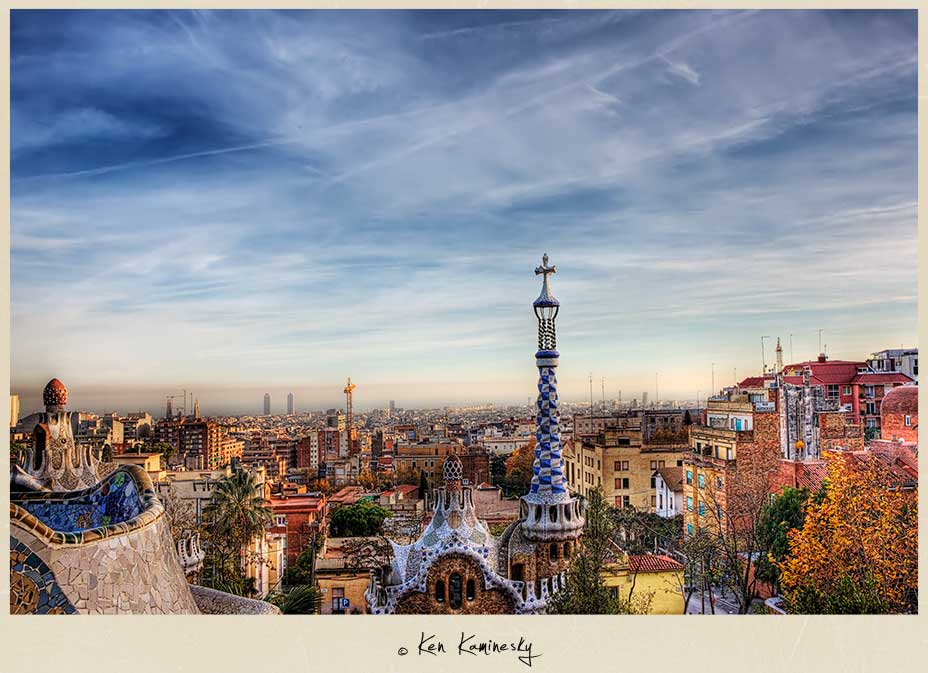 Sunset at the top of Parc Guell, what a view!

My sister and brother in law just returned from visiting Spain and had so many fun stories about all the cool places that they visited that it made me want to go back right away! One of their stops on the trip was to Barcelona, which just has to be on everyone’s list of must see places. Barcelona is renowned for it’s arts, culture, sports, architecture, night life, and is now becoming Europe’s new culinary capital. If it sounds good, just wait till you see it for yourself.  The photos I’m sharing with you today are all from Parc Guell designed by the Catalan architect Antoni Gaudí, who’s masterful architectural designs have become synonymous with Barcelona.

The above photo was taken from the lookout where you can go to enjoy the amazing panoramic view of the city. If you look to the middle left of the image you will see the cranes working on another Gaudi landmark, Sagrada Familia. The photo brings back memories of the Rastafarian looking guy playing steel drums, tons of tourists enjoying a near perfect day at the park, and hanging with a new friend I met earlier that day at another one of Gaudi’s chef-d’œuvres, Casa Battlo. We had made the trek to the park directly form Casa Battlo immediately getting nice and lost. Since the park is a bit out of the central tourist areas of the city, we took the metro, got off at the correct stop, but proceeded to walk in the total wrong direction. We were paying more attention to the conversation than to the map and directions. Neither of us was on a tight schedule, so we laughed it off and finally got someone to give us directions. Parc Guell is in a rather hilly area and is a fair distance from the metro station (even if you don’t get lost), so I would advise good walking shoes, a bottle of water, and patience. Once you get there be prepared to spend a few hours strolling around on the meandering pathways, as there is a lot to see and it is quite a large park. 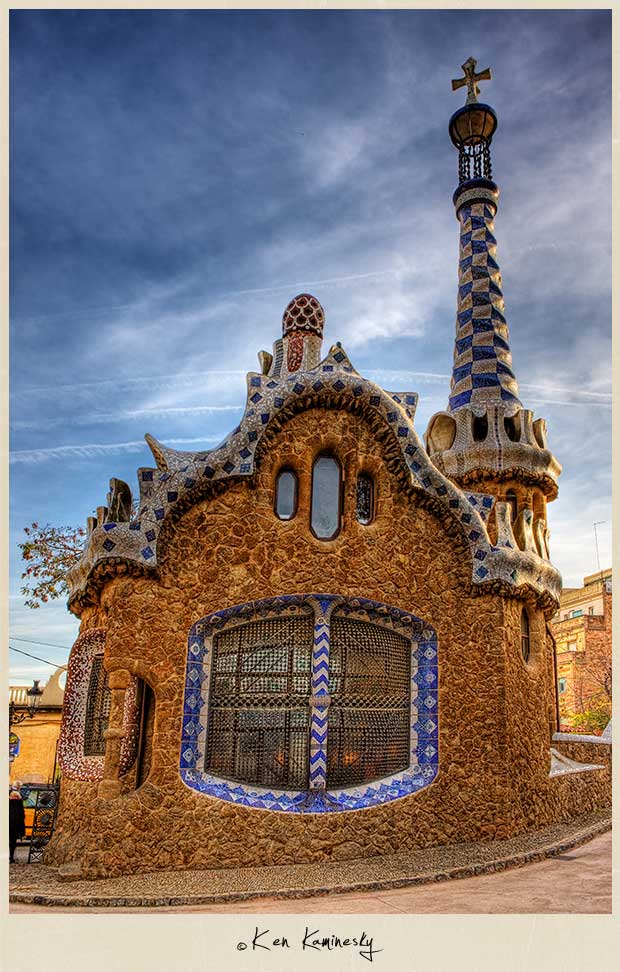 Dreaming of a better world

These two photos (above and below) are also designed by Gaudi and reside at the entrance of the park facing the famous staircase. They remind me of gingerbread houses from fairy tales, and as I look at Gaudi’s work I often wonder what it must have been like to think the way he did, to see the world in such a unique way. Visionaries like him are such a rare breed, and even when there are brilliant ideas in architecture, those ideas are rarely used to actually build the structures conceived in the minds of these geniuses. Architecture is a very expensive form of art and being creative and original is often synonymous with failure, since funding expensive projects requires millions and in some cases billions of dollars. The more unique the design, the more expensive it usually is to construct. Ahh, wouldn’t it be sweet to live in a perfect world, where creativity was better funded than armies? Nice to dream, isn’t it? That’s what Gaudi’s work makes me do… dream of a better world. 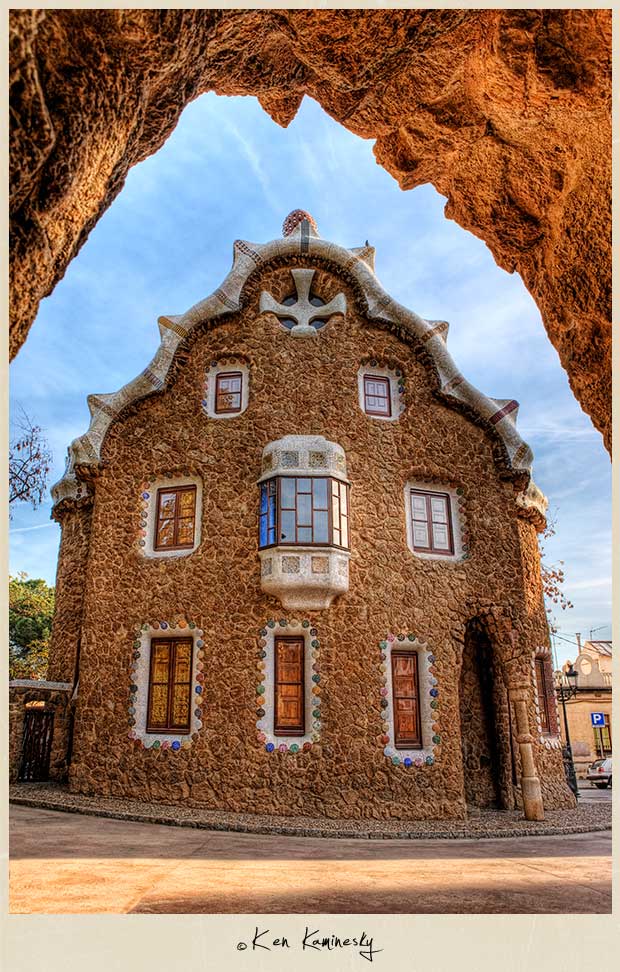 This rose coloured building which now houses the Gaudi Museum, was Antoni Gaudi’s home from 1906 -1926, and in and ironic twist was not one of his own designs, it was conceived by another architect, Francesc Berenguer. There is a fee to get into the museum, however there is no charge to enter the park itself. Inside the museum (Casa Museu Gaudí) you’ll see original works by Gaudi and many of the people that collaborated with him on his brilliant projects. 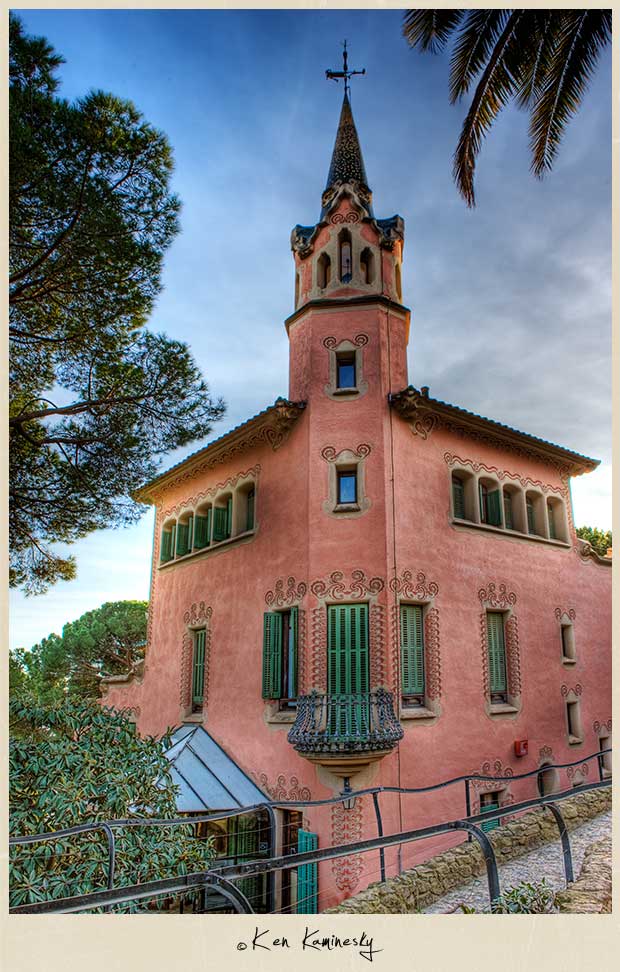 I just returned home from a week in Toronto and I’m now planning my next trip(s). Looks like I’ll be heading somewhere warm soon and I can’t wait! This is going to be a busy summer of travel, filled with fun opportunities to get some new photos of some very interesting parts of the world. I’ll have more details soon, stay tuned :)