Making the Cover of Up Magazine 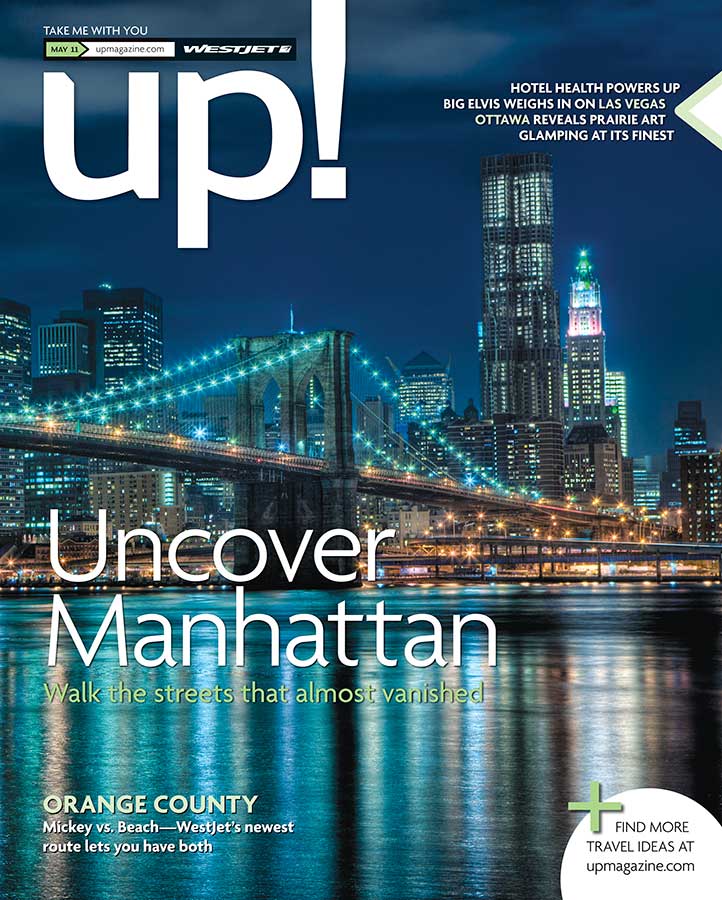 I’m thrilled to get another cover of West Jet’s in flight Up magazine!

Last September I was lucky enough to be in one of my favourite places on the planet… New York City! I was there for some meetings and to shoot this great story for up! magazine about Jane Jacobs’ heroic struggle to preserve Washington Square Park and the architectural charm of SoHo, Greenwich Village, and the Lower East Side. I hope that you’ll visit the West Jet blog where you will find the story written by Eric Rumble:

Eric does a masterful job of exploring the history and social implications of  the park, and some of the coolest districts in New York City.

To see a full edition of the magazine online, please visit:

The story and photographs appear on pages 46-55 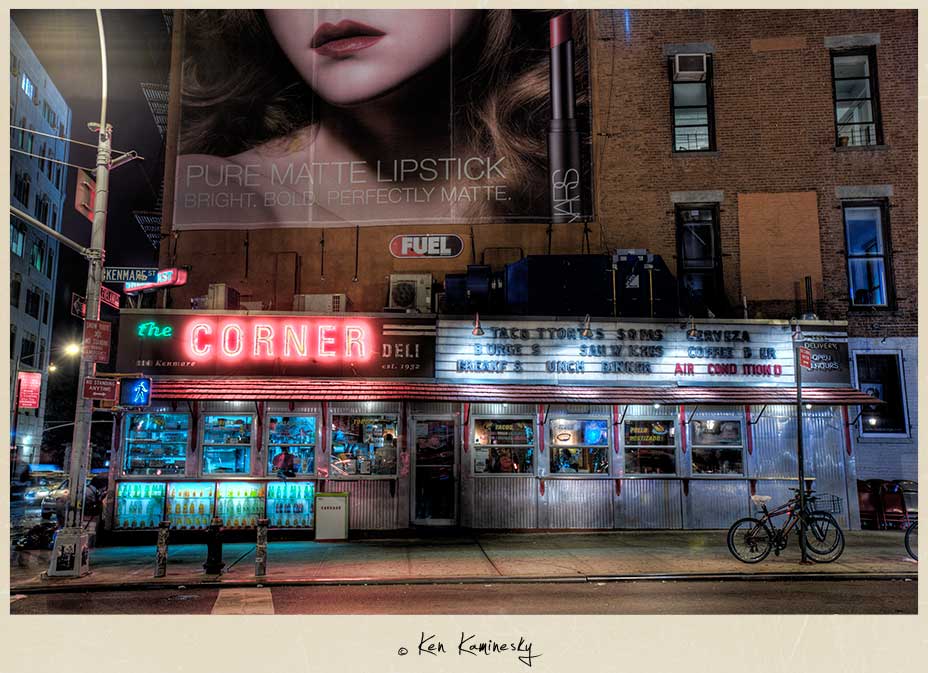 Oh no… Not another security guard story, and why I’ll never eat at Cafe de la Esquina

Yes folks, I’m afraid so. It seems like everywhere I go, there is another security guard that thinks he is saving the world from terrorists, by preventing me from taking photos. It’s very frustrating since I have every right under the law to do my job and take these photos. In some cases I have to respect the wishes of security, such as when I am on private property. That’s a given. I would not want someone to take photos of my home or in my home without permission, so I always follow the rules when it comes to private property. However in this case I was trying to get a shot of Cafe de la Esquina seen in the two photos here, when I was approached by a rather large gentleman in a suit, who appeared to be cracking his knuckles as he traversed the street to come and have a little chat with me.

To put things into perspective, I was tired, it had been raining for 3 days since I arrived in New York City, and I finally had a nice clear day to get my photos done for this cool story for up! I had been up since sunrise, walking from Greenwich Village, to SoHo, and on to the Lower East Side. In fact, I was asked to get some interior shots of the restaurant and had been there earlier in the day to talk to the manager. She seemed unusually suspicious of someone who was trying to get her restaurant some free publicity, and I was quite puzzled by her attitude. I waited for a while inside the restaurant to while she went to talk to either the owner or her superior to see if it would be cool for me to get some photos. Unfortunately for me, and even more so for them if you ask me, she came back with a negative reply to my request. As I said earlier, I’m cool with respecting the wishes of property owners, but this time I was kind of stunned when they declined the request, since the photos were to be presented in a good way to so many people in such a classy magazine. So, I talked to my art director who put together the shoot plan, and she said that it was okay, but please go back at night for an exterior shot. Cool! I love night photography, as so many of you who read my blog on a regular basis know. Besides, Cafe de la Esquina does have a very photogenic facade, and with all the sweet neon lights it was bound to come out looking sharp.

As I returned that evening, I was eager to finish the work day with a fun series of photographs of the illuminated restaurant. When I arrived, I was planning on having dinner there after I had finished with my photos. I love Mexican food and I was really hungry. So I set up my tripod and was beginning to adjust the settings of my camera and look through the lens, when I saw the above mentioned gentleman, who looked like a cross between Mr. Clean in a nice suit and a great white shark. At first I just thought that he was just crossing the street and would walk right by me. Nope… No such luck! 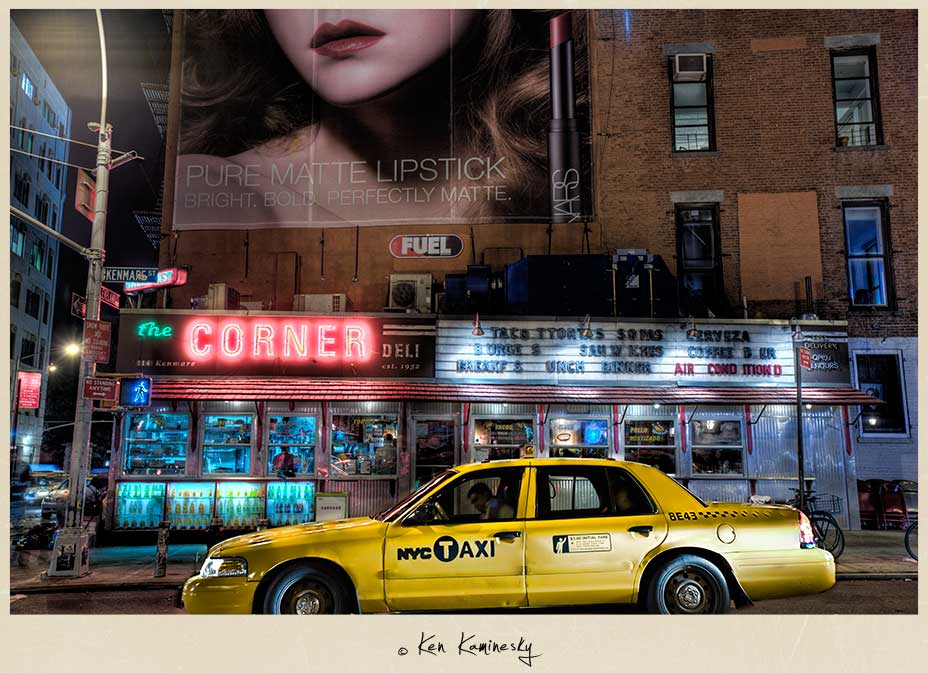 As he positioned himself next to me, or should I say as he stood right in front of me preventing me from taking a photo of the restaurant on public property, I got annoyed and asked him if he could please move. This is when he began to question me about what I was doing, without ever telling me who he was, or why he was asking me these questions. Since I have nothing to hide, and my goals were to do my job in an efficient manner for the magazine, I decided to ask him why he was questioning me instead of suggesting to him that he should remove his giant bald Mr. Clean head from his… Oh you get the picture, I was polite. Polite but annoyed. That, and as I am self employed, I really don’t have a dental plan that covers punches to the face. In this case, as in so many other cases, discretion was the better part of valour.

He then began to tell me that the owners would like to talk to me to find out why I’m taking photos. Fair enough, so I told him that they could come and discuss the matter with me out here. He didn’t like that option, and I wasn’t going to set foot on their property while there was the potential for any form of conflict. He then went on to tell me that they didn’t want me taking photos of the establishment without their permission. So I informed him that I didn’t wish to see war, famine, or disease in the world, but neither of us were likely to get our wishes any time soon. After all, I didn’t appreciate the intimidation, and I did explain exactly why I was taking the photos and for whom, and why this would be a good thing for the restaurant as it is a great way to get free publicity in a well respected magazine, but that wasn’t enough for him. He then threatened to call the police! So I did what any polite Canadian would do in this situation, I offered to let him use my phone and dial 911 for him, just in case he had forgotten the number ;) I know my legal rights and he did too, he was just hoping that I would be scared off by the threat of the police. Ironically, the beautiful police station is just a block away and I had been there earlier in the day to photograph the building for the story. You can see it in the second West Jet blog post with my photos:

I always take into consideration the fact that while I’m on a shoot, I am representing my client as well as myself. It would be rather foolish of me to do or say anything that could tarnish my reputation, or that of the magazine. Frustrating circumstances arise from time to time, and I try my best to deal with them in a polite fashion, and I think I did my best with this security guard. Was I sarcastic? Sure. Rude? I don’t think so. I love my job and want to keep taking photos of beautiful places and nice people for as long as I can. This is my work, what I get paid to do and I’d appreciate it if security people would just understand, that other photographers and I  are just trying to take the best photos we can, for good reasons. I got my shots, so I’m happy, but all you security people out there with a chip on your shoulders, please treat us with dignity and courtesy and we will do the same. Understand that we have rights, and please do not try to use threats or force without just cause. You are bound by the same laws that we are supposed to follow, so do your job to the best of your ability, and remember that respect commands respect. Thank you.

I have nothing bad to say about the restaurant or the food. My issue here was with the security guard who was acting on behalf of the restaurant. Needless to say, I did not end up eating there, so I can’t comment on the food or service. The place is very popular, so I’m assuming that the food is quite tasty. I just have no intention of going back there, but that’s just me.

On  parting note, I have a question :)

I debated which image I liked best of the restaurant, the one with the yellow cab, or the clean version that showcases the restaurant’s facade with no distraction. Which one do you prefer?

« Camels at Sunset in the Desert of Wadi Rum in Jordan
Savannah’s Pubs, English, Scottish, Irish – A Photographic Pub Crawl »