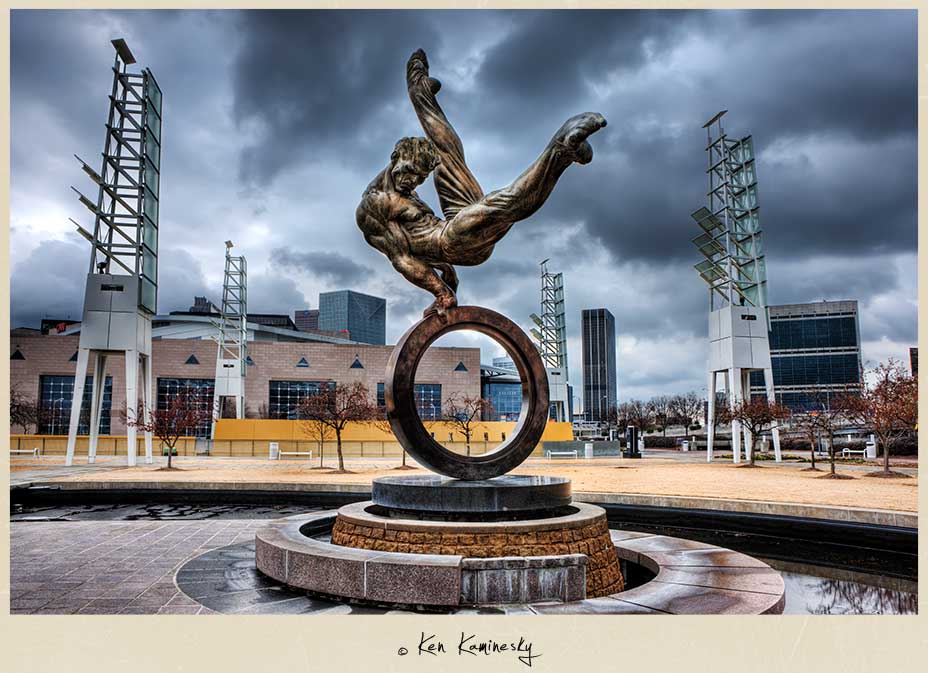 This photo was taken on a cold dreary winter’s day in Atlanta during my recent road trip up and down the eastern USA. I think it adds a certain drama to the photo and really accentuates the monument of the gymnast. Working in the cold is nothing new for a Canadian like me, but in this case I was not just working, I was also enjoying the company of a good friend.  My buddy Carl and I had worked on some VERY cold shoots together a few years back, when he was the senior creative manager at the Weather Channel. I had worked with the Weather Channel on several shoots in Montreal on some insanely cold days. This was back in the days of shooting film, and I remember that the polaroids that we shot for lighting tests would actually freeze, batteries would die in a couple of hours, and the gears of the cameras would jam. When we would shoot in the morning near sunrise, the temperature would hover around -25°C/-13°F. Compared to what we are used to when working together,  this day in Atlanta, Georgia was a bit like a walk on the beach for Carl and I.

On this day, I was fortunate to have Carl take me on a tour of the Olympic park and areas surrounding CNN, the football stadium, and hockey/basketball arena. I’m so used to traveling alone, and being on my own when I’m shooting, that it was a great pleasure to be able to hang out with a great guy like Carl all day. The stop in Atlanta brings back great memories of special times with Carl and his wife Jaime. I was treated like a king in their home, and even contemplated kidnapping Jaime just so that she could continue cooking for me. I don’t know how Carl remains so thin with all that insanely good cooking and baking going on in their home. To quote Carl on Jaime’s cooking: Daaaaaaaaaaaaaaamn that’s good!

Getting a chance to spend time with friends that I haven’t seen in years is very special, particularly around the Christmas holidays. I was too busy enjoying their company to get much shooting done so, hopefully that will give me good cause to return one day soon. Thanks Carl & Jaime for making my time in Atlanta so memorable!

This statue of the gymnast looks incredibly like me, especially the rippled muscles. Ok, ok… The only thing that resembles anything about me in this photo is the ring that the athlete is holding on to. It kinda looks like the doughnut I just ate, except smaller. The artist who created this very cool sculpture is Richard Macdonald. Check out the amazing art that he has created on his website, the intricacy and detail is incredible. I’m a big fan of his work now that I did some research on his stunning sculptures. If his sculptures were not enough to marvel at, Macdonald  is also a talented painter.

To me this is one of the great joys of travel. Learning about new places and people, discovering talented artists, eating in some great restaurants and learning about local dishes, listening to cool new music, making new friends and seeing old ones. Life really is a trip.

« Beautiful, Breathtaking New Zealand | Land of the Long White Cloud
The Love Affair with Train Travel is Over »