A Disquieting Darkness in Savannah, Georgia | The Streamliner 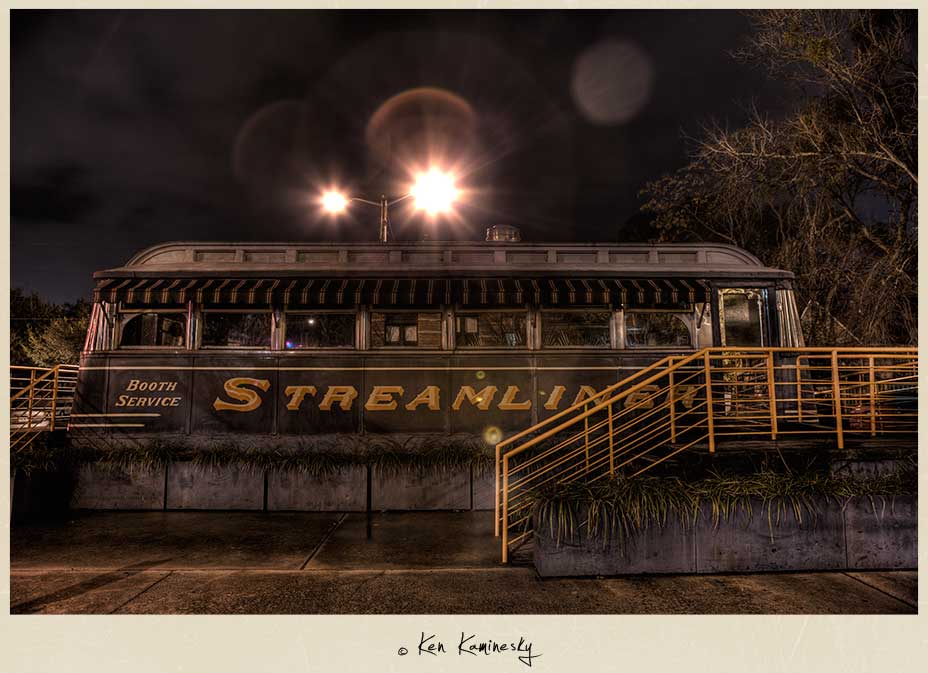 I did my research before going to Savannah Georgia so I knew that I wanted to photograph the Streamliner Diner. Savannah has endless photo opportunities, especially in the Historic District. There are so many of those beautiful Old South homes and other buildings, but this diner really stood out for me. I had walked by earlier in the day and thought that it might look better as a night shot. Looking back, I think I was right. There is something foreboding and ominous about the appearance of this place at night, while during the day it looks much more ordinary. I was quite alone when taking this photo. While the odd person would walk by, and cars would come and go, I felt a bit odd. Not that I felt at risk or anything bad, like I said in the title, it was like a sense of disquiet in this darkness.I kept looking behind me, even though I knew that no one was there. Perhaps it’s because when you walk around Savannah at night, the beautiful old homes look like your typical Hollywood inspired haunted home. Since I had been walking all night photographing these places, it’s a small wonder I felt a little paranoid.

The Streamliner Diner was constructed in 1938 in Worcester, Mass. After it was built, the diner was shipped to Newport, New Hampshire and was a fixture there for close to thirty-three years. The diner was moved to Savannah in 1990, and later that year the  Art Deco Societies of America honored the Savannah College of Art and Design for its restoration of the old Streamliner Diner. The college now owns and operates the diner, which is open for breakfast and lunch. It is located on Henry street just a short walk from Forsyth Park.

I’m really thrilled to announce that I’ll be heading on a new adventure, to the Hashemite Kingdom of Jordan! I’ll be touring the entire country in a photo filled 2 week trip in April, and I can’t wait to share some of my photographs with you here on my blog. I’ll be visiting the Dead Sea, the historic ruins of Petra that was established sometime around the 6th century BC, the capital city of Amman, the Red Sea, and so many more incredible places. If any of my awesome readers have had the pleasure of visiting Jordan, and have any tips, I’d appreciate hearing your thoughts. It’s my first trip to the Middle East, and I’m eager to learn more about the culture and customs of the Jordanian people. I can’t wait!