Dawn at the Pantheon in Rome 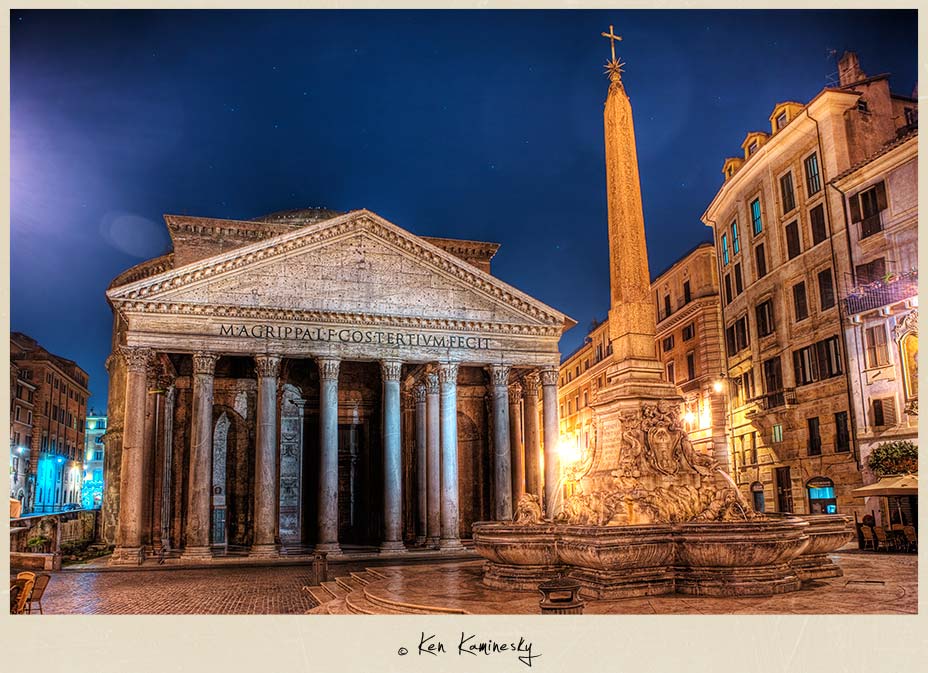 This is one of those places that I’ll always remember. I had just finished photographing the Trevi Fountain twenty minutes earlier, and to be honest I was meandering around the area with no plan, when I checked my iPod to see what other sites were nearby. I have some great travel apps, with maps, points of interest, Wikipedia entries, and all kinds of cool stuff that helps me get around and shoot the most interesting places. I didn’t remember that the Trevi Fountain and the Pantheon were so close together. Lucky for me that they are, or I would have missed the perfect time of day to get this photo. People were slowly arriving to their early morning jobs, at the restaurants and cafes behind me, as I was taking this photo. It’s always a special treat to be nearly alone, or alone at such a beautiful and historic place. The scene is quite different in the day time; with hundreds of tourists milling about the church, the fountain, and the outdoor cafes surrounding the Pantheon in Rome.

The Pantheon was commissioned by Marcus Agrippa as a temple to all the gods of Ancient Rome around 31 BC. It was then rebuilt by Emperor Hadrian in about 126 AD. This is one building with some serious history and it would take pages to get into the details. During medieval times the building was given to the Catholic church by the Byzantine emperor Phocas, and Pope Boniface IV converted it into a church. The church is now named Santa Maria dei Martiri. During the Renaissance, the Pantheon was used as a tomb, and some rather famous people are buried there. These include the painter Raphael, the composer Corelli, and the king of Italy, Vittorio Emanuele II.

All over the world you will find buildings modeled on or inspired by the Roman Pantheon. Places like the US Capitol building in Washington DC, The Pantheons in London and Paris, as well as churches in many countries.

Now that I’m back from a month on the road, I’ll be starting to work on the new images from all the great places I was able to visit. Look for photos from Washington DC, Atlanta, Saint Augustine, Savannah, Charleston, and New York City in upcoming blog posts. I had a great time, and now I’m looking forward to sharing the photos and stories with you all here on my blog.