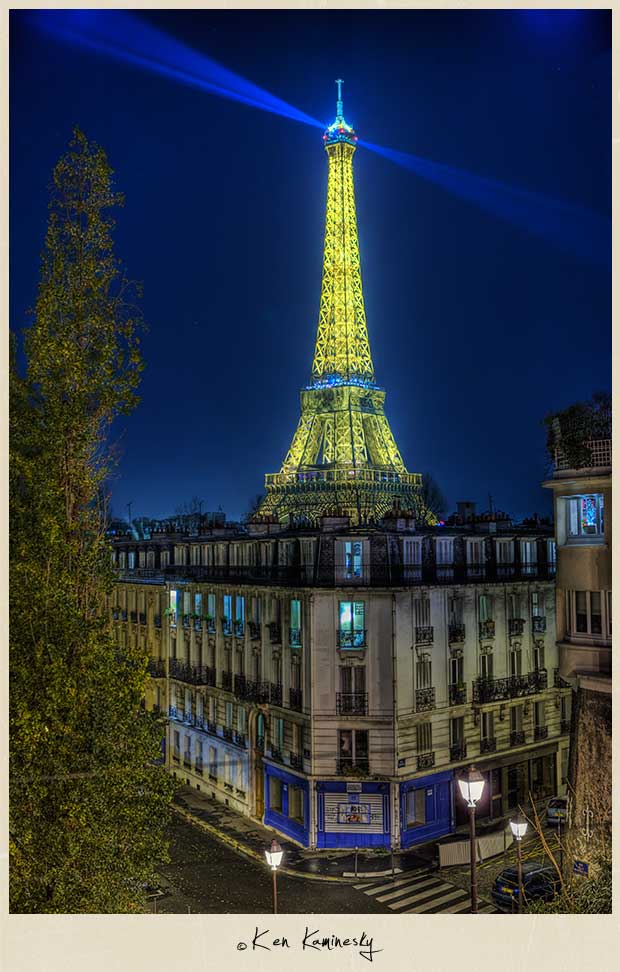 Another testament as to why why I prefer walking to any other form of transportation in a big city. I had just shot the exterior of the Musée D’Orsay, and was walking around, with no real destination in mind. Lucky for me that Paris truly lives up to it’s motto “the City of Lights”. While all cities have a special look at night, Paris is just out of this world gorgeous after nightfall. I tend to be enthralled with wherever I am visiting, but Paris, oh my! How I’d love to be able to live there, if only for a short while. I dare say that I’d never get tired of exploring, and discovering new places to photograph.

As I was walking along that night, in search of nothing but whatever would present itself to me around the next corner, I saw a small group of friends huddled together further up the street. As I approached, I could hear them oooh and aaah, and then saw them taking some photos with their point and shoot cameras. From where I was walking from I couldn’t see what they were photographing. When I got to where they were I recall letting out an “oooh” of my own, and for good reason. There was a small cement ledge, with just enough room to set up my tripod. As the people who were there just a while ago had already left and there was no one else around, I felt like I had the Eiffel Tower at night all to myself. Unbeknownst to that group of friends, I owe them my thanks and gratitude. If it had not been for their exuberance, I may not have even walked further up the street. So it pays to keep eyes AND ears open. You never know exactly what will help you get the next great shot.

The thing I like most about this image, is the way the blue of the sky matches so perfectly the blue at the bottom of the apartment building. I didn’t do any colour correction, I swear! The next night I went to the Eiffel Tower for the light and sound show. I had really planned on not going, but I was nearby and who knows when I’ll be back, right? I had a feeling it would be really gauche, but I stand corrected. What a show! No one does” big and classy” as well as the French, this was no exception. If you’re visiting Paris, do yourself a favour and go see the show, I’m smiling just thinking of it right now.

Even though I’m feeling rough with this cold and I’m coughing, sneezing and aching all over, I’m trying really hard to convince myself that I’m lucky to be in beautiful Savannah, Georgia. I mean I know I am lucky to be here, I just hope that I can get back to feeling ok, so that I can see as much as possible, and take as many photos as I know I can when I’m feeling fine. Just sitting here writing, has seemed to give me a second wind, so I’ll be heading out again for some night shooting. That, and the fact that I don’t think I’ve ever written a blog post, from a place with a nicer view. I’m staying at the Hyatt in Savannah, and they put me in in a room with a killer view of the Talmadge Memorial Bridge. The whole time I was writing, gigantic container ships were meandering down the Savannah river. They were so close that I felt that I could jump right on to their decks. Now that the sun has set, I’m off to continue exploring.