The view from the top of the Cathedral in Florence, Italy 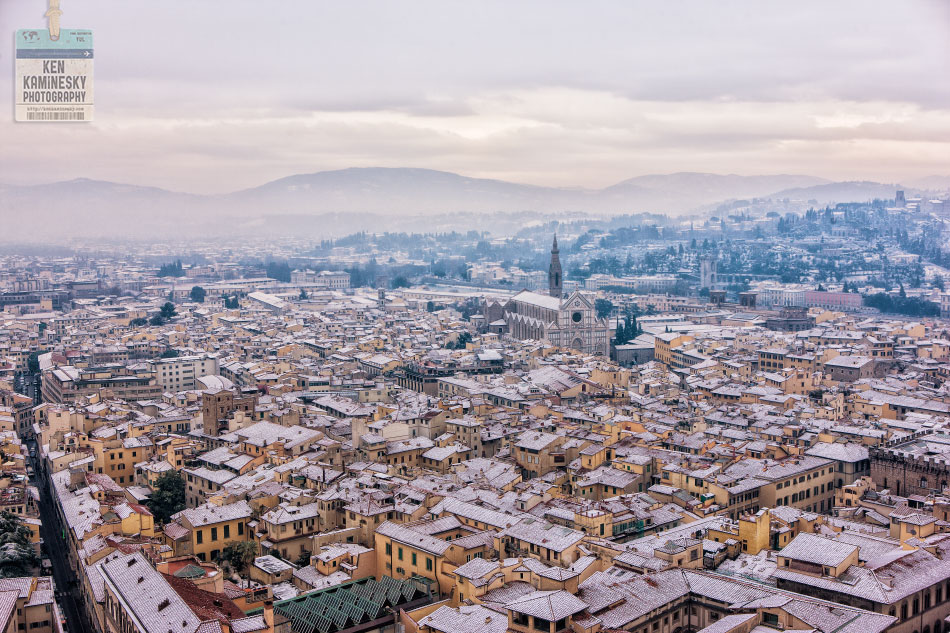 I’ve been waiting a while now to post this photo of the vista seen from the top of the dome of the Cathedral in Florence. It seems like I attract snowy conditions wherever I go (like last Friday in Washington D.C.), and for the first time in nearly a quarter century, snow had fallen in Tuscany on this day. If Florence is beautiful on any day, this day she looked even more lovely, with a fresh coat of white snow that made the buildings look like gingerbread homes with icing sugar dusted on top of the roofs. With my fear of heights being what it is, I was not too sure that I really wanted to go out onto the top of a snowy, slippery dome that is around 376 feet/115 metres high. I guess it’s true what they say, you do have to suffer for your art, so I sucked it up and climbed the stairs up to the roof and was greeted with this spectacular view.

Most people are far more brave than me when it comes to heights, but it still seemed strange to me that no one was really bothered by the wet and icy observation deck. The railings seemed to be no higher than waist level, and yet people still would walk up to it an lean on it. I wish I wasn’t overcome with such an anxious feeling when in such high places, it would make the experience of beholding such spectacular views far more enjoyable. Even though I was dreading the feeling of being so high up, I was not moved to leave too quickly, and like with so many things in life it was for good reason.

As the snow turned into more of an icy rain, a fog began to hover over the city. Even though my camera was getting wet, I still did not want to leave, the scene in front of me was just too beautiful. At one point a couple next to me asked me to take their photo and as usual I was happy to oblige. I ended up doing this for a number of couples and eventually ended up talking to one nice couple from the US. We spoke for a while and they told me all about being on the road for months, it sure sounded like they were having the time of their life. They had just come from Venice and told me that it was flooding quite badly, and that it was also uncharacteristically cold. I had mentioned that Venice was high on my list of must see places and would make a point of getting there on my next trip to Europe. After all, I had promised my wonderful friend Viv who had passed away a few months earlier, that I would shoot there one day soon. Venice was her favourite place in the world, so I want to make sure that I honour her by doing some of the best photography I can. I can’t wait to go there and see for myself what made Venice so special to her.

After talking to the nice couple from the states, I told them a bit about Viv, how much she meant to me, how much I miss her, and her struggle with cancer. I explained how much she inspired me to see the world and photograph it in my own way, and that I think of her in all the beautiful places I am so fortunate to see. I began to tear up, and at that moment I just wish that she could have been at the top of the Duomo with me. She would have loved the snow covered scene that I was enjoying so much. At this point the guy in the couple I was talking to just gave me a big hug and told me that I looked like I needed it, and I guess I did. Perhaps the nicest thing about traveling is the unexpected kindness of strangers, and this remains one of my nicest memories of all my travels, and I smile every time I think about it.