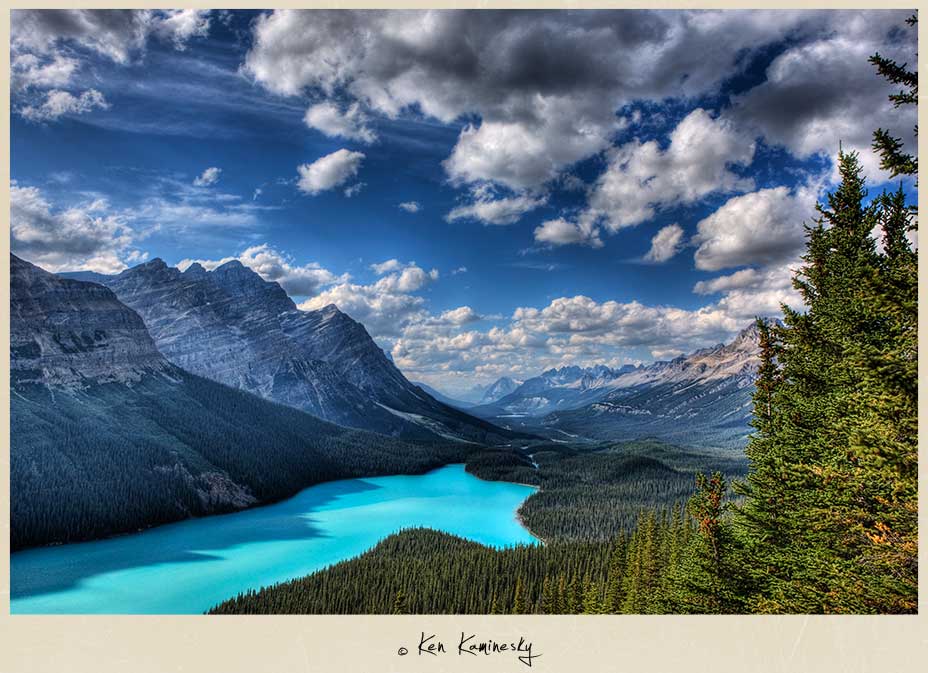 When people see this photo for the first time I often get get asked why I changed the colour of the water so drastically. If you’re one of the lucky people to have visited Peyto Lake then you know that I did no such thing. This is the true colour, I swear! This was a moment that took my breath away and you can see why. The lake itself is enough to make your jaw drop but I was lucky enough to be there at a time when the cloud cover was just perfect for a photo. I wish I could have gone down to the lake itself but that would have required a rather long hike and I was pressed for time. There is so much to see in Banff National Park that with limited time you have to make some tough choices and move on quickly if you want to absorb as much as you possible.

The memories of seeing Peyto Lake will stay with me forever. It’s as if you were walking into a landscape painting. The only difference is in the painting there are not a hundred people standing around you all jostling to get the perfect spot to take their snapshots. Most certainly there is no one in that painting yelling at the top of their lungs, “Madge, did you bring the sandwiches?!?!!”

Peyto Lake was named after Bill Peyto who was a trapper, and one of the first guides in the area where the park is today. The reason that the lake and many glacier fed lakes such as this one have such incredible colour is because of the glacial rock flour. Rock flour is tiny particles of rock that are formed when glaciers grind their way over the rock surfaces that they lie on. Since the bits of rock are literally like bread flour they get suspended in the water. This makes the water appear milky or cloudy. In the summer when it rains, or the glaciers and snow melts a bit, the milky water gets deposited into the lakes. The rock flour stays suspended and reflects the sunlight in this really spectacular fashion.

Oh by the way, Madge it seems, had forgotten the sandwiches in the car.

« Up, up, and away! Old Montreal featured on cover of West Jet’s in flight Up! Magazine
The Cathedral of the Holy Cross and Saint Eulalia in Barcelona, Spain »