Up, up, and away! Old Montreal featured on cover of West Jet’s in flight Up! Magazine - Ken Kaminesky Travel Photography Blog 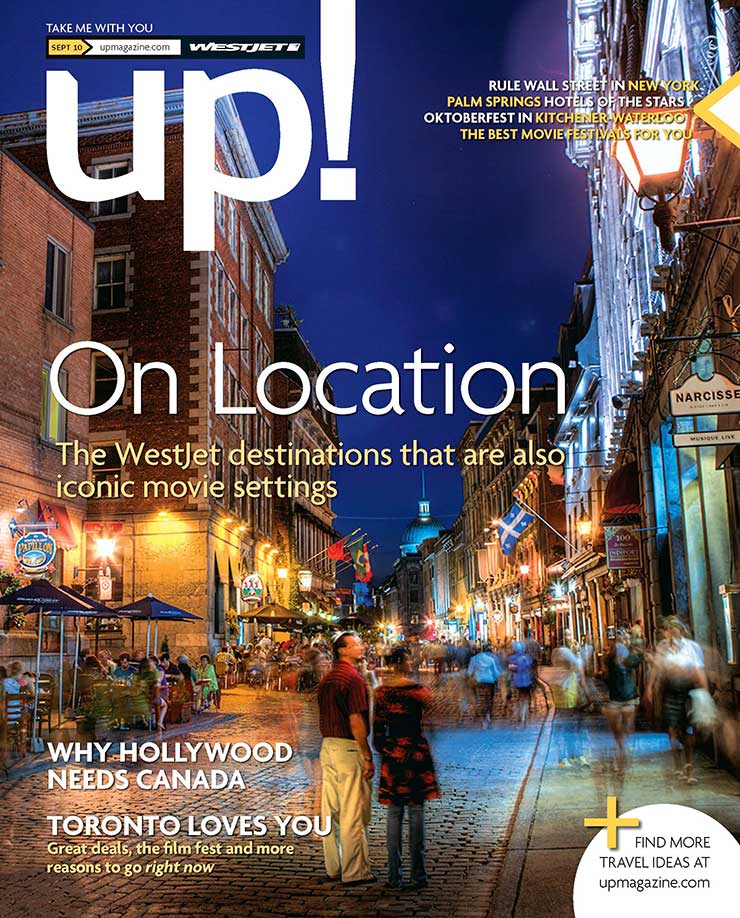 I recently did a shoot of my home town for Up! magazine, West Jet’s in flight travel and lifestyle magazine. The shot they used for the cover was one I took in Old Montreal on rue Saint Paul, which in the summer is turned into a pedestrian only street. We get enough cold weather here in Quebec that it’s nice to have all the open air restaurants and cafes in the summertime, like you see in the photo. In this issue of the magazine, Barrett Hooper writes about many of the places that West Jet flies to where major Hollywood motion pictures have been filmed. You can read the whole magazine here: http://www.mygazines.com/issue/15056 and (shameless self promotion!) pay special attention to pages 58-59. More photos can be seen here Cinematic Cityscapes along with Barrett’s article. There are some cool shots from other photographers as well in this series. Photos from Los Angeles, Las Vegas, Victoria, Miami (where I lived for a while), and New York City (where I’ll be shooting in 3 weeks).

We have had very strange weather this summer in Montreal. I had to go several times to get the right shots, as it seemed to rain every time I’d make an attempt to shoot. The cover photo was the easiest one of the two, since this time I wanted to get some people in the shot. As a rule I try my best to make sure I don’t have anyone in my images. However this time I think it conveys a better feeling of what it’s like to walk around the old city at night. There is a nice blend of locals and tourists walking about as you hear the sound of music coming from Les Deux Pierrots, Old Montreal’s most famous boîte-à-chansons (song club). Walk a bit further and you’ll arrive at Place Jacques Cartier, next to Montreal’s beautiful city hall. There you will find some great buskers that perform to the delight of onlookers. Just to the south you’ll find the Old Port of Montreal where there is a lot of cool stuff to do, for people of all ages. Art galleries, museums, great restaurants, and you can even bicycle or rollerblade on the F1 Grand Prix track! Old Montreal is a fantastic place and once you visit, you’ll want to come back again and again.

The reason for shooting the Old Montreal scenes was to capture some of the feel of the hit movie “The Score” with Robert De Niro, Marlon Brando and Edward Norton. The film was not only shot here but based here as well. A lot of both good and bad movies have been filmed in Montreal and I’ve been lucky enough to work on a few myself in a very small capacity. I worked on The Human Stain starring Nicole Kidman and Anthony Hopkins, Confessions of a Dangerous Mind starring Sam Rockwell and George Clooney, and Abandon starring Katie Holmes and Benjamin Bratt who was a very cool guy and really into photography. Through some of the people I met on movie sets I heard a rumor that Marlon Brando refused to wear pants during most of the filming of The Score. He was apparently not happy with director Frank Oz’s interpretation of his role. If you’re like me and love a good caper movie then rent The Score, there are some great plot twists and you can’t ask for better caliber actors.

If you haven’t flown with West Jet, you’re missing out on some of the nicest people to deal with while traveling in today’s stress filled airports. Ask anyone who’s flown with them and I bet they will tell you the same thing. Plus the staff are well known for their sense of humour as you can see in the following video. Anyone who travels a lot will appreciate the West Jet touch. Traveling can be rough these days, so it’s nice to get where you’re going with a smile on your face.