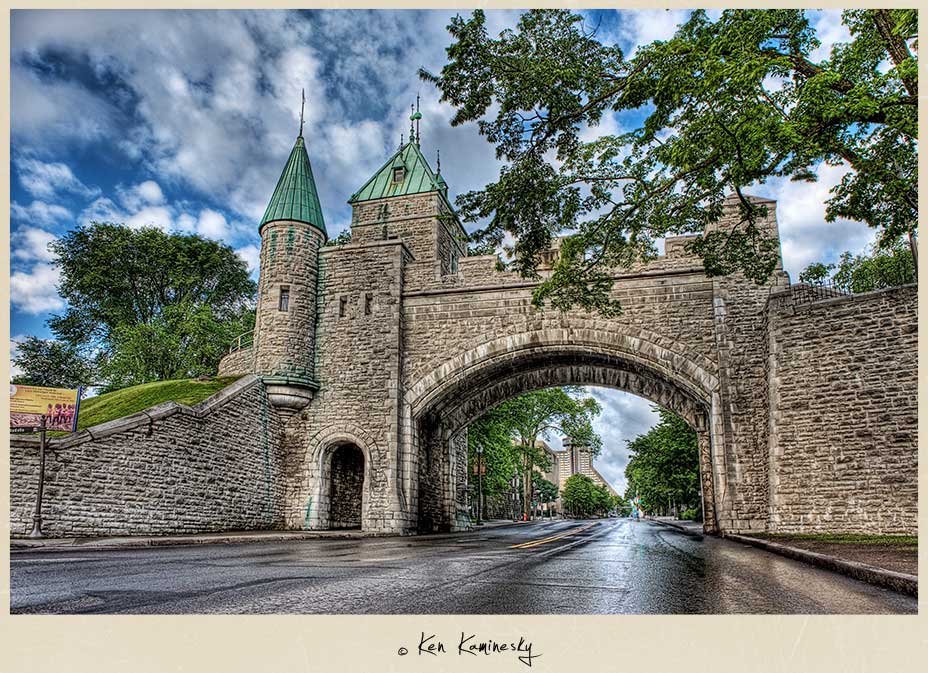 Old Quebec City was declared a UNESCO World Heritage Site in 1985 and is now in the company of such wonderful and diverse places as the Taj Mahal, Teotihuacan and Grand Canyon National Park. If you’re looking for amazing places to visit then look no further than the list of World Heritage sites. Personally I think that the United Nations should hire me to go and photograph each and every one of these incredible locations, so I’ll just sit here by the phone and wait for them to call. The photo above is of Porte Saint Louis or the gate of Saint Louis. Originally built in 1694 it was torn down in 1791 and completely rebuilt due to its poor condition.  The fortified walls in the photo are an example of the ramparts that surround the city and Quebec City is the only place in North America above Mexico that still has fortified city walls. Quebec City. In the 19th century there were calls to tear down the walls because they were seen to be preventing urban development. But in the end they were preserved by Frederick Hamilton-Temple-Blackwood, 1st Marquess of Dufferin and Ava (now THAT is a name!) who was the third Governor General of Canada. Thanks Fred, the ramparts now continue to add charm to the city and a sense of Quebec’s historical importance in the New World.

Walking around in Old Quebec feels just like walking in a small town in Europe. The cobblestone streets, the old and well maintained buildings, the cute shops, bistros and pubs all add to the charisma of the place. Sometimes people feel that they will have a hard time being understood or understanding the locals since the official language is French but no need to worry for English speaking visitors. Most people in Quebec City and Montreal speak both French and English or at least a bit of both and will be happy to speak to you in the language of your choice. It never hurts to try and speak a little bit of French though. You may learn something, meet new and interesting people that you otherwise would not. It always makes the locals smile to see someone try their best to speak to them in their own native tongue. I think this applies to visiting anywhere, throw in a few words in whatever the local language is and it will show respect to the people that call the place you are visiting home. If you own and iPod or iPhone you can find tons of great apps for learning languages or translation. This can be very handy when stuck in a situation where you really need to get your point across or in an emergency. I often use a subway guide, tourist map, city guide and language related apps when I travel and I find that it is an great way to get around without having to carry a lot of heavy books. Just be careful that you know if an app requires you to connect to the internet, those roaming charges in foreign countries can be brutal.