Angel on the Ponte Sant'Angelo in Rome, Italy 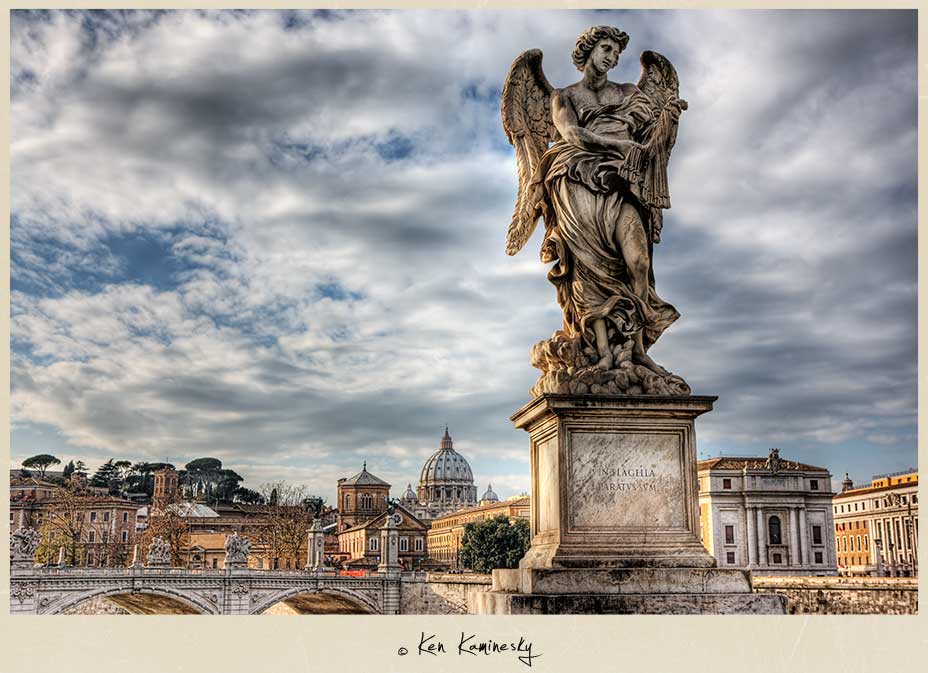 I had rather lousy weather in Rome during my stay there but I made the most of it by going to shoot interiors when it was raining. I also got up really early such as for this photo of the beautiful angel statue on the Ponte Sant’Angelo that I took on my last morning in Rome. It seemed that one minute I had blue sky and then out of nowhere dark grey clouds would fill the sky and I’d be stuck in a downpour. No matter what the weather was like though everywhere I’d go in Rome I’d end up seeing something that would just take my breath away. For those of you who are lucky enough to have visited Italy’s capital city, you know what I mean. I think that coming from North America where everything in our cities is so young as compared to Europe makes it even more incredible for me. Rome was one of the best places I have ever been in terms of interesting sights to photograph and I’d love to get back one day for another round of photography as there is only so much I could cover in a 5 day trip.

The Ponte Sant’Angelo is a pedestrian only bridge that pilgrims once used to get to Vatican City which as you can see is not far away by the dome of Saint Peter’s Basilica in the background of the image. The bridge was originally built in 134 AD by Roman Emperor Hadrian as a means to get to his newly constructed mausoleum which is now the Castel Sant’Angelo which I’ll showcase in a future blog post. The bridge has changed names many times during it’s history until the name Sant’Angelo stuck in the 7th century. Apparently an angel appeared on the top of the castle to announce the end of the plague hence the name Sant’Angelo. There is a bit of a dark side to the story as well, not that the whole plague thing isn’t dark but at least that part ended with an angel appearing. In 1450 part of the bridge collapsed due to the multitude of pilgrims there for the Jubilee and many drowned in the Tiber. Later in it’s history the bridge was used to expose the bodies of the executed. Perhaps worst of all is the fact that I stubbed my big toe on the bridge, pretty gruesome right? ;^)

Thank yous, shout outs and gratitude to my readers!

In my last blog entry I showcased a church in Paris and requested some help naming it. So I posted the question on Facebook and Twitter . It sure didn’t take too long to get the correct answer, about 30 minutes. I had a number of incorrect guesses but Camille who goes by @campersonne on Twitter got it right first. It’s l’Eglise De Saint Louis en l’Ile in the 4th arrondissement. It’s no surprise that she knew, after all she works at the KWE Group which is an award-winning marketing and public relations agency specializing in luxury travel, hospitality and lifestyle. So the big prize of a lifetime supply of me thinking you are awesome goes to Camille who I’m sure is telling all her friends how lucky she is. Don’t be too jealous, I’ll do another “Name the location” blog post soon with an equally impressive prize.

Thanks to Camille and everyone else who helped me get the right name of the church!