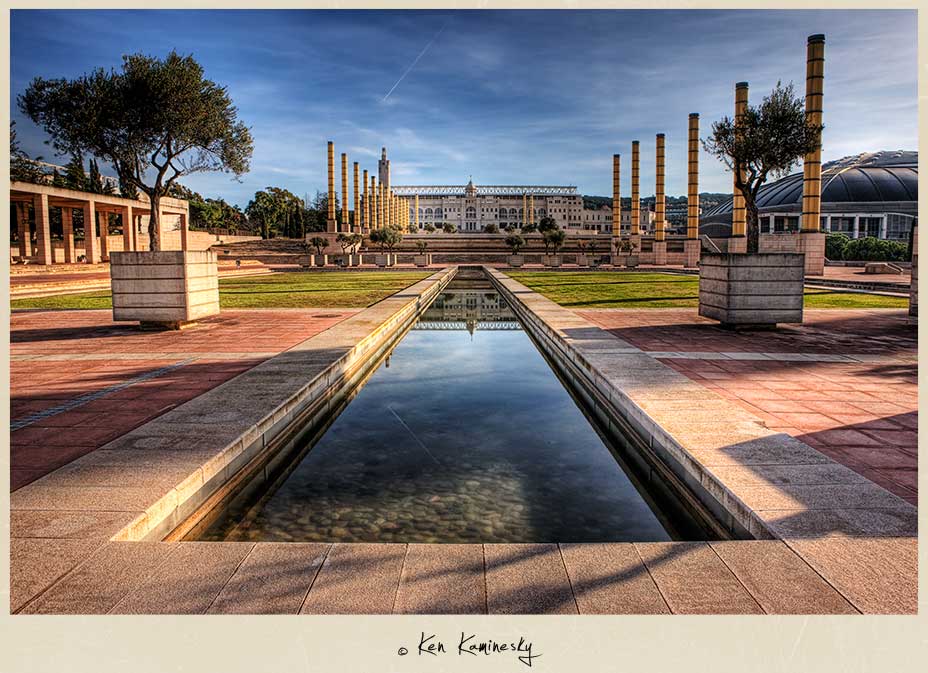 I got up early once again to be able to get this photo at the Olympic Stadium garden in Barcelona with few people milling around and those that were there have magically disappeared thanks to good old Photoshop. As I left my hotel the woman at the front desk cautioned me that there would be a lot of people out that day as it was a holiday. To my great delight there was hardly a soul in the area around the stadium, so I had a good chance to get some nice shots of all the funky details around the Olympic park. When I get to these big open spaces and there is no one around it makes me think of what it would be like to be all alone in an empty city like in some cheesy sci fi movie. The only thing missing is zombies around every corner just waiting to attack me. Hey, when you travel alone you have a lot of time to think, perhaps too much time as in my case. I guess really liking cheesy sci fi movies helps fuel my imagination as well.

The weather in Barcelona that morning was perfect, a warm day with a crisp, cool December breeze coming off the Mediterranean. This made for perfect picture taking an was also great for walking to all the other spots that I ended up in like Castell de Montjuïc, Poble Espanyol and the marina. Barcelona’s Olympic Stadium (Estadi Olímpic Lluís Companys) is the building in the middle of the photo. Unlike most of the stadiums for recent Olympic games that are build specifically for the Olympics this one dates back to 1927 for the 1929 Barcelona International Exposition. It was renovated for the 1992 Olympics to hold 70 000 people. The stadium was originally named Estadi Olímpic de Montjuïc but then renamed after Lluís Companys i Jover who was the was the President of Catalonia from 1934 and during the Spanish Civil War. He was executed by the fascist Franco regime in 1940.

After taking a lot of photos around the stadium I saw that there were people walking into a small door leading to the interior. As I wasn’t sure if I was allowed in I nonchalantly walked in attempting to look like I belonged there. I was relieved to to see other people follow me in and then as I got to the seating area I saw group tours, so I knew it was ok to be there. Sadly the field was being reconditioned and looked awful so I didn’t bother with a photo. Somehow both the field and seating areas seemed smaller that what I was expecting. Perhaps because of the fact that I’m used to Montreal’s Olympic Stadium which seems so cavernous on the inside and is a giant of a building from the outside. I’ll share some photos of that stadium in a future blog post.