Tour EDF - A night at La Défense in Paris, France 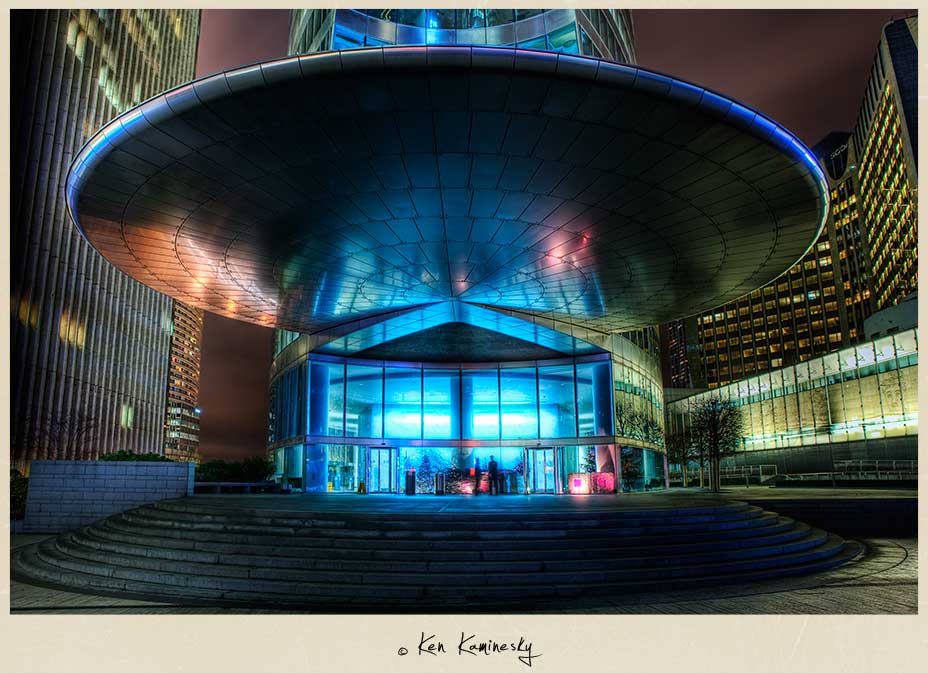 One of the differences between modern architecture and classic or historic buildings is the stories that go along with the structures. While a building like the Louvre or the Roman Colosseum have countless stories that can be told about them, modern buildings are somewhat dull in comparison. Visually however I rate both types of buildings and structures as equally fascinating to photograph and over the years I have developed a great affinity for modern design and architecture. Let’s take le Tour EDF’s facade as shown in this photo as an example. While not too many people may care who resides in the building (Électricité de France, France’s main electricity company) it is a rather stunning entrance into an extremely well designed modern skyscraper. Buildings serve a purpose, they have to contain a blend of form and function in order to serve their purpose and some architect do this so much better than others. The La Défense business district is full of interesting modern architecture and continues to evolve as the years go by.

Behance is a great place to discover some very beautiful art in so many different forms. If you’re a commercial artist like me, a creative looking for artists or inspiration or just a fan of art, design, film, photography and just about any other kind of commercial or fine art I think you’ll enjoy browsing through Behance’s various galleries. At the bottom of the galleries you can post comments which are always appreciated and click on the blue thumbs up button to show that you liked what the artist presented.

I remember that while taking this shot so many people were walking in front of my camera and I was getting really frustrated. It seemed that just when I was about to get the series of images that I was looking for someone would step in front of the camera once again. It’s hard for anyone to know that I’m taking several exposures of each scene and that some exposures last up to 30 seconds so I try and time it perfectly. Unfortunately there is little chance of getting that “perfect” series of shots. So when a scene is busy with people walking by I tend to take 5 or more series of photos and then pick the ones with the least people to blend together later on the computer. Most people don’t even realize that I’m taking pictures and often I get one of those I’m sorry looks from them as they notice that they are standing right in front of me while I’m trying to take a shot. What’s funny is that they seem to notice this and stop dead in their tracks like deer caught in the headlights of oncoming cars, usually directly in front of me. At one point as I was taking this shot a young couple was walking by and failed to notice me as I was attempting to get my shot. When they did notice me they looked at each other and without speaking the man dipped the woman as if dancing a tango and gave her a huge kiss. They both laughed and waved good bye to me as they strolled off together arm in arm. You have to love Paris!