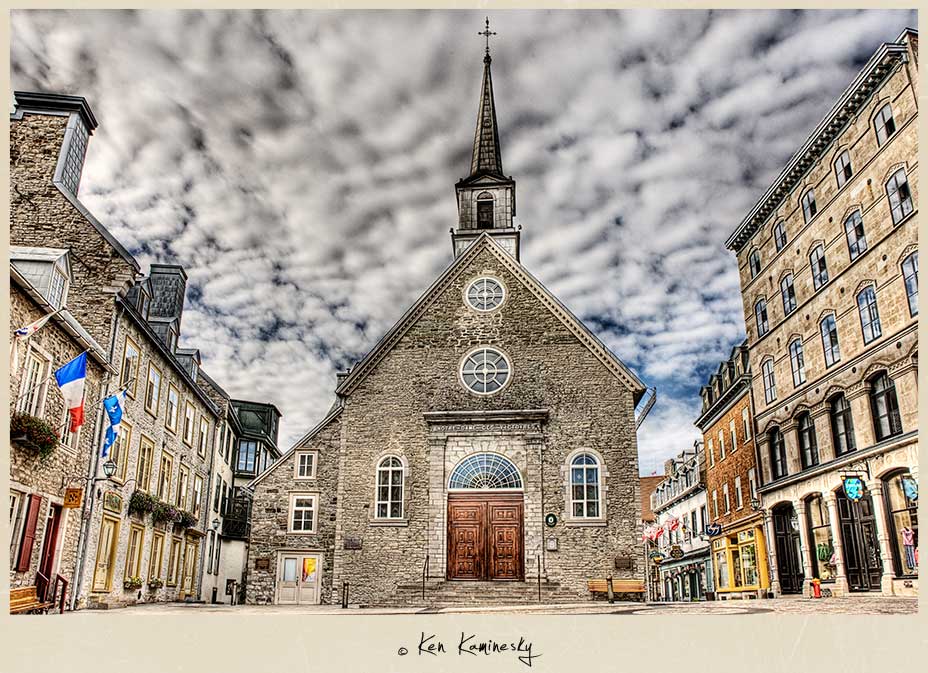 One of the quaintest places in all of Old Quebec or Vieux-Québec in French is Place Royale. This is the place where Samuel de Champlain built Quebec City’s second habitation between the years of 1623 and 1626. After a fire in 1682 most of the houses there were rebuilt and in 1686 the area became known as Place Royale when a bust of King Louis XIV was erected at it’s centre. Two years later in 1686 Notre Dame des Victoires Church was built only to be destroyed by canon fire during one of Canada’s most famous battles that was fought between the English and French armies. The battle of the Plains of Abraham also known as the battle of Quebec took place in 1759, in the United States this war was known as the French and Indian War and in Canada the Seven Year’s War. This conflict was instrumental in the future founding of Canada as a nation. Today Place Royale welcomes tourists from all over the world with little chance of being hit by canon fire ;^)

The day before I shot this photo I had been in Place Royale to attempt to take some photos and found it far too crowded with the thousands of tourists that were in Quebec City for the annual Summer Festival. So I got there the next morning around 5 am just in time to get some great photos without worrying about getting in the way of anyone or anybody walking into my field of vision. With over 300 concerts and shows over 11 days it’s easy to see how the whole town is abuzz with the joie de vivre that the  Quebecois are so well known for. This year’s line up include the Black Eyed Peas, guitar virtuoso Carlos Santana, local favourites the Arcade Fire and be sure not to miss Quebec singing legend Gilles Vigneault as he celebrates a career spanning 50 years, July 14 on the historic Plains of Abraham.  I think that next time I visit Vieux Quebec to take photos I’ll do it during less festive period. Then again Quebec City is also renowned for it’s world famous Winter Carnival and Ice Hotel and I do want to photograph all the cool stuff that is associated with winter in Quebec. So much to photograph, so little time!

« The spectacular view from the spire of Sagrada Familia, Barcelona, Spain
Tour EDF – A night at La Défense in Paris, France »