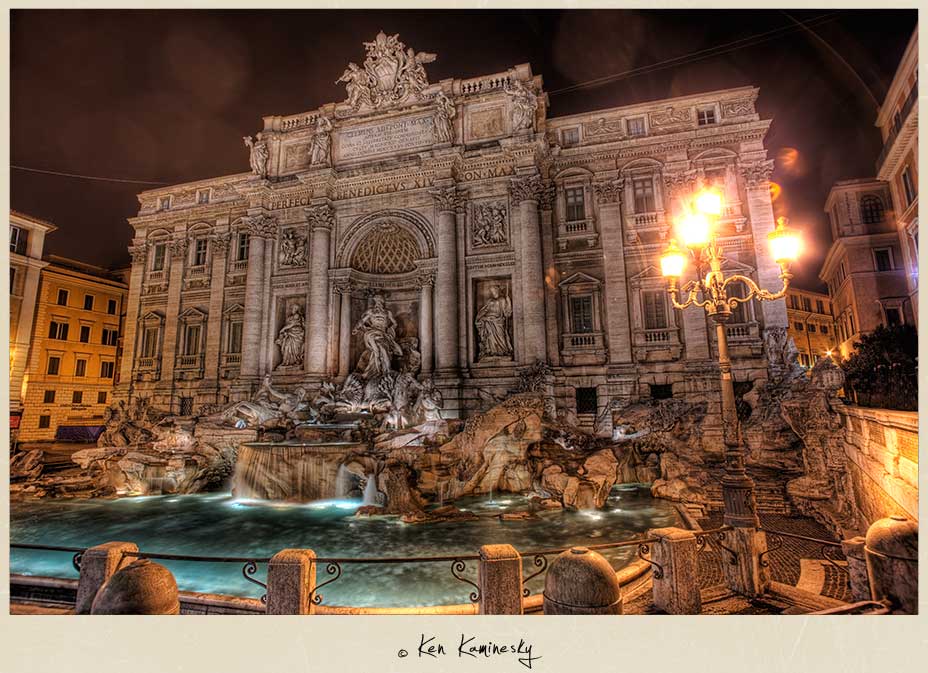 The Trevi Fountain or Fontana di Trevi is the largest and most famous baroque fountain in Rome. The fountain gets it’s name from the fact that it sits at the junction of three roads or in Italian “tre vie”. Traditionally Romans built rather elaborate fountains at the terminal point of their aqueducts. In this case the Trevi Fountain marks the end of the Acqua Vergine as well as the Acqua Virgo which were originally built in 19 BC by Marcus Agrippa during the reign of Caesar Augustus. Today the Trevi Fountain is one of Rome’s more popular tourist attractions. Legend has it that if you toss a coin in the fountain you are guaranteed to return to Rome, toss in two coins and a new romance will blossom and three coins will lead to marriage or divorce! Over a million euros are tossed into the fountain each year and the proceeds help fund a supermarket for the needy in Rome.

The day before I took this photograph I attempted to get a shot of the fountain during the day and was stopped by two of Rome’s finest police officers. While hundreds of people were taking snapshots I was confronted by these 2 officers who told me it was forbidden to take photos in Rome with a tripod. Now I can understand needing a permit for a commercial shoot, in fact I use them all the time when shooting commercially. It’s only fair to get a permit if you will be blocking a street, traffic or cause a distraction by photographing stunning models in a public place. There are liability issues, which is why I have insurance, in fact I’ve been on shoots where people have driven into trees because they were staring at my models when they should have been watching the road! What I find hard to fathom is why taking 2 minutes to capture a photo with a camera on a tripod poses a national security threat. What made it worse is that the policemen could not tell me where I could get a permit and then proceeded to follow me around as if they were shadowing some arch villain from a comic book.

As usual, things happen for a reason and I left the tourist infested Trevi Fountain to console myself with a a plate of potato gnocchi with gorgonzola cream sauce, a couple of glasses of relatively inexpensive but delicious chianti and perhaps the most decadent sfogliatelle pastry in the history of Italy. Feeling much better I went off to photograph some other locations on my list and plotted to return to the fountain in similar fashion of general MacArthur returning to the Phillipines. I rose well before sunrise the next day in hopes of there not being any tourists or police at the Trevi Fountain and I was fifty percent lucky. Not a tourist in sight at 5 am, however there was a police car with 2 officers in it. Since it was dark I could not tell if they had seen me or my wicked tripod so I meandered along nonchalantly in hopes of disguising my fiendish photographic intent. My ruse was a success! I cleverly placed myself just out of sight and took a series of photos of the fountain and ended up with one of my favorite images from my trip to Europe.