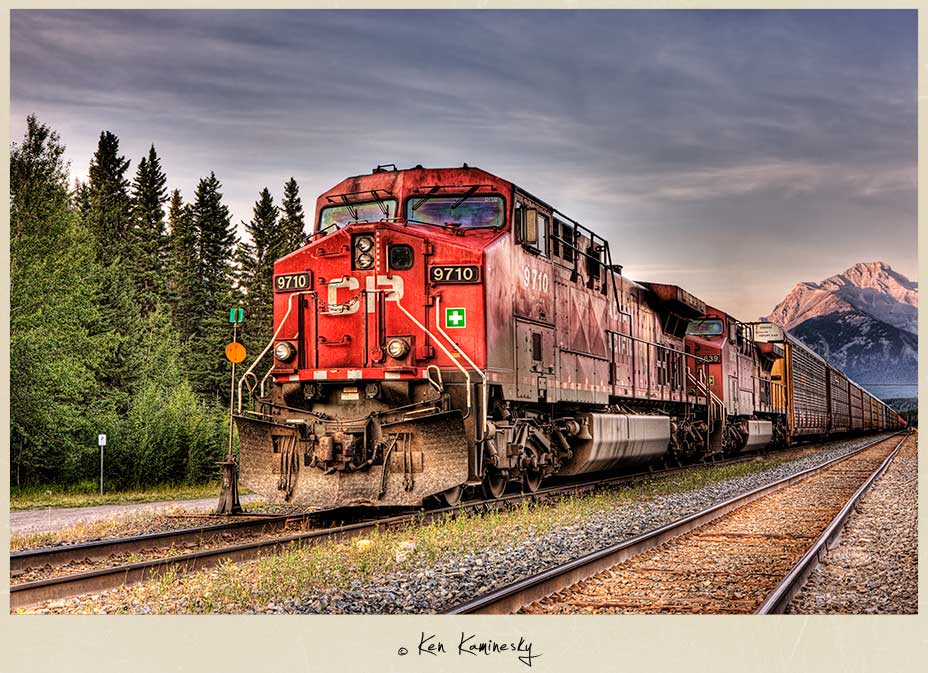 As school children in Canada we all learn how important the railroad was to our nation’s founding and what a monumental task it was to build a rail network across such a vast country with what would seem to be rather insurmountable obstacles. These obstacles were both geographic an economic but let’s talk about the geographic ones since this photo was taken at a point where so many of those obstacles began for the railway. It was relatively easy for the railway to be constructed on Canada’s flatter areas through Quebec, Ontario, Manitoba and Saskatchewan. However once reaching the majestic Rocky mountains in Alberta the challenges were many including building spiral tunnels at Kicking Horse pass, digging tunnels through kilometers of mountains and building bridges and snow sheds to avoid avalanches. The last spike was the driven into the Canadian Pacific Railway at Craigellachie, British Columbia at 9:22 am on November 7, 1885.

This photo was taken at sunset as I was returning to my hotel in the town of Banff from a day long trek driving and hiking all over Banff National Park. I was lucky to have the train in town at the very moment I was returning and I immediately parked my car and went to take this photo. One of the things I hate to do is ask people to step out of my frame when I’m taking a photo since once in a while I find that some people can be confrontational about this simple request and I’ve even had people deliberately stand in front of me while trying to take pictures.

On this day I was confronted by both nice people and idiots. The nice people were a group who were just standing near the train and talking and I asked if they could please just move away for one minute and they obliged happily. I was happy that I now had the opportunity to get the photo I wanted and set up my tripod and camera, always keeping in mind that at any time another train could be coming in on that second track from behind me. There is a road just a few meters behind me as well and all of a sudden some idiot stopped his car on the tracks, rolled down his window and started yelling at me while honking his horn. I couldn’t understand what he was saying so I approached his car to be able to hear him and all he wanted was for me to get the #$%* out of “his” picture as he was trying to take a snapshot from his car. While it was tempting to show him just how beautiful my middle finger looks in the warm glow of the setting sun I refrained, turned away and took this photo. If he would just have asked nicely I would have happily obliged just as those nice people did for me moments before. I just hope that I looked good in his picture ;^)