The Duomo at Night in Milan 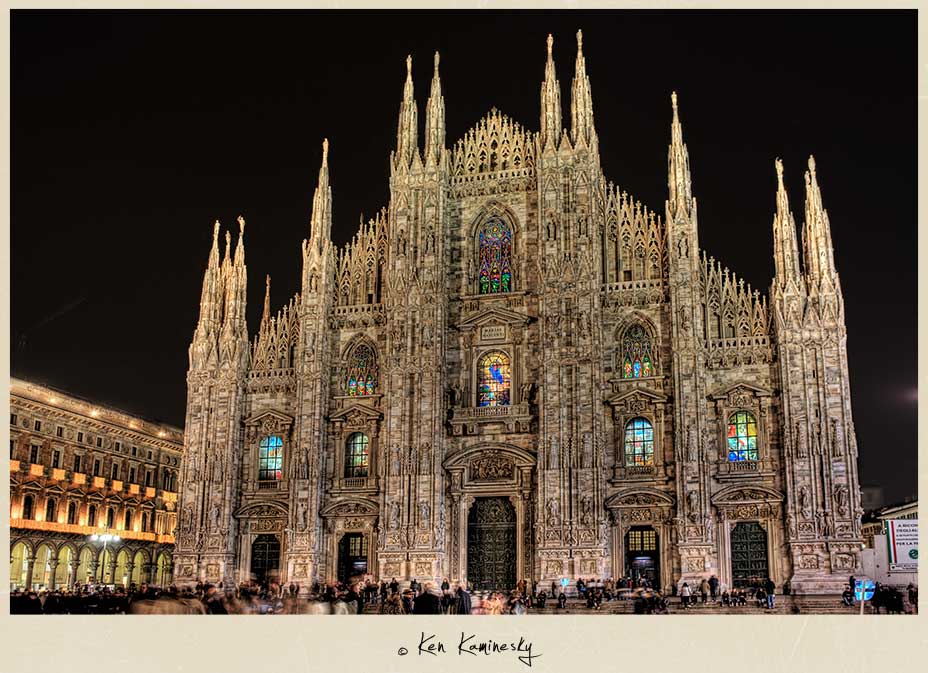 The Duomo or Cathedral in Milan is at the very center of the city and the Piazza del Duomo in front of the church is usually a very busy place. People meet there for all kinds of official ceremonies and celebrations or just to hang out and socialize. To the left of the photo you can see part of the Galleria Vittorio Emanuele II which is home to some trendy elegant shops selling things from haute couture and jewelry to books and paintings. One of the main entrances to the Galleria is just off frame to the left and there are always hundreds of people coming to and from the shops and restaurants out into the Piazza.

I showed the inside of the Duomo in a previous blog post and it is just as spectacular from the outside, perhaps even more so with all the intricate details in the hundreds of carvings and statues that adorn it’s exterior. I think Mark Twain said it best when he wrote ” They say that the Cathedral of Milan is second only to St. Peter’s at Rome. I cannot understand how it can be second to anything made by human hands.”

It took hundreds of years to complete the construction of the Cathedral and it was actually Napoleon Bonaparte who was responsible for it’s completion. As he was about to be crowned king of Italy in 1805 he gave assurances that the expenses to complete the facade would be paid by the French treasurer. The facade was completed even though the promise to reimburse the costs fell through. Napoleon was crowned King of Italy in the Duomo and a statue of him sits atop one of the spires.

I thought this would be an especially fitting Easter week end photo since legend has it that one of the nails from Christ’s crucifixion is somewhere in the dome above the apse inside the Duomo.

Have a nice week end!