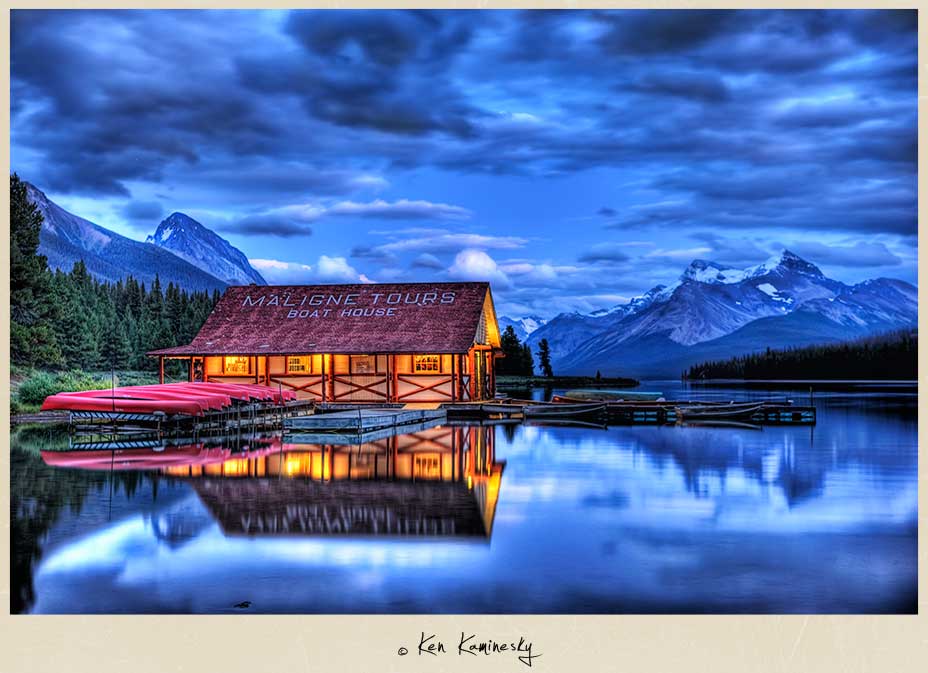 Maligne Lake in Jasper National Park in Alberta is one of those spectacular picture perfect places as is well evidenced in the photo above. I had been there earlier in the day and while there wasn’t a lot to photograph what there was is really breathtaking. I didn’t have the time to take the boat ride out to Spirit Island which would have given me much more subject matter to shoot, it’s hard to make those decisions about what and where to shoot when my time is limited. It’s a 50 kilometer drive from the town of Jasper to get to the lake on a scenic windy country road. On the way I saw elk and bears on the roadside foraging for their dinners, passed Medicine Lake and watched as the sun set behind the Rocky Mountains while I was approaching Maligne Lake. I had taken a few shots during the day and told myself that I had to see the boathouse in the blue light of dusk and I was right. I arrived at the parking lot to find that I was the only car there which was tranquil yet creepy in a Friday the 13th Jason kinda way. By the time I arrived at the shore it was dark even if it looks like there is a fair bit of daylight left in the photo. This is one of the cool things about using camera and software tricks like HDR photography, you’re not nearly as limited but it is a lot of work to get the image to look this way.

When I look at this photo now it makes me smile for two reasons. One, it’s become one of my personal favourite photos that I have taken and two, because it is so very deceptive in looking so calm and peaceful. The truth is that while there was a nice soothing feeling for about 1 second, soon afterward I was being attacked by about a gazillion mosquitoes! Dusk near large bodies of water in the late summer in western Canada is no picnic, unless of course you are a mosquito and the main course is photographer blood.

« The Colosseum at night, Rome, Italy
The Duomo, Campanile & Baptistry in Florence, Italy »