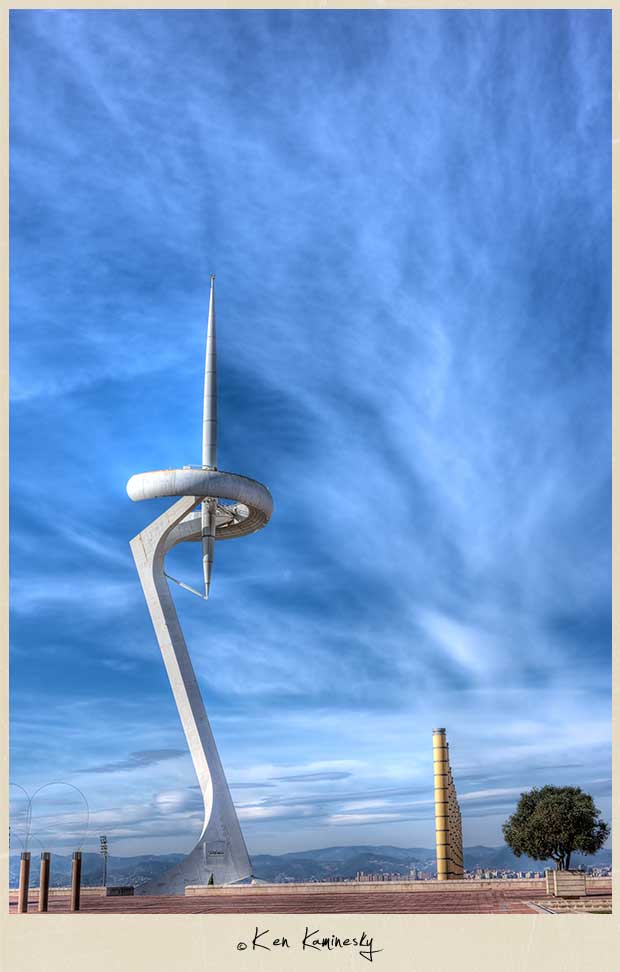 I thought that I’d stay on the Olympic theme today in honour of all the athletes and volunteers that worked so hard to make the 2010 games in Vancouver a smashing success. Today’s photo is from Barcelona in Spain and that giant tower to the left is the telecommunications tower built to accommodate all the media coverage for the 1992 Olympic games. The tower sits in the Olympic Ring complex in Montjuïc park  not far from the stadium and is known as the Montjuïc Communications Tower or as it is called locally Torre Telefonica. It was designed by the brilliant Spanish architect Santiago Calatrava who’s building designs seem to really push the boundaries of how engineers and architects can use glass, steel and concrete. The base of the statue is covered in trencadis or broken tile shards in the style made famous by another famous Spanish architect, Antoni Gaudi.

The 188 meter tall tower depicts an athlete holding the Olympic flame and is quite the sight to behold from any angle. Interestingly the needle in the centre was designed to also act as a giant sun dial but I think I’ll stick with my watch ;^) This was my first morning in Barcelona and I could not have picked a better place to begin the day. Within walking distance of tower there is the Olympic stadium, National Art Museum of Catalonia, Poble Espanyol or Spanish village the Botanical Gardens and much more. This was a great day for me filled with discoveries and great opportunities to take a lot of interesting photos.