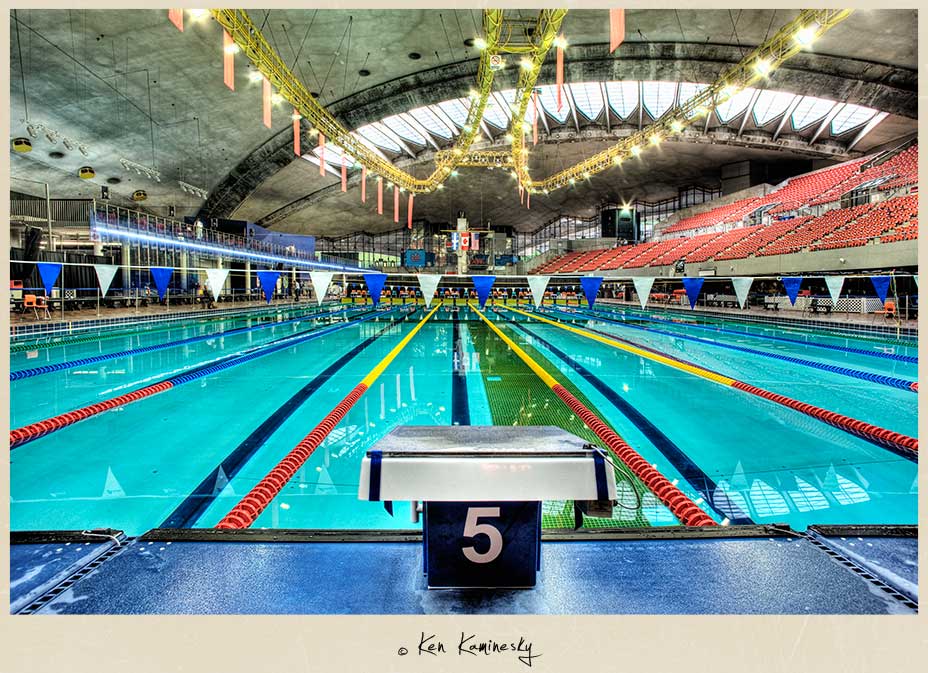 I thought that I’d show an Olympic themed photo considering today was the closing of Vancouver’s very successful Olympic games. This photo was taken at Montreal’s Centre sportif du Parc Olympique. The Olympic Aquatic centre is part of a complex of buildings that make up Montreal’s Olympic Village that was built for the 1976 Olympic games. I shot this last summer when Michael Phelps was in town for a swim meet and about 2 hours after I took this photo the stands were packed to capacity to watch the great American swimmer win his first race of the competition. There was some serious electricity in the air as he dove into the pool and we all watched as he destroyed his competition. He could have stopped halfway and ate a sandwich before going on to win by 20 lengths. When you watch elite athletes in their prime do what they are best at it is a real treat and while it’s great to see on television it is so much more exciting when you see them live in front of thousands of people cheering and screaming.

Congratulations to the city of Vancouver for a great Olympic Games, you showed the world why Vancouver always is at the top of lists of most desirable places in the world to live. Being Canadian I’m really happy to have watched a fantastic gold medal hockey game between Canada and the U.S.A. tonight, the game went into overtime and was a nail biter the whole way through. Both teams played exceptionally well but Canadian fans everywhere erupted into cheers when Sydney Crosby scored the gold medal winning goal on Ryan Miller in the overtime period. All of Canada is celebrating tonight not only a great hockey game between friendly rivals but also a record for gold medal wins by a host country in a winter Olympics with 14 gold medals! Way to go team Canada, we’re all very proud of you.

Enjoy more photos from around the world

« Amazing Art at the Church of Saint Ignatius of Loyola at Campus Martius in Rome
Torre Telefonica designed by Santiago Calatrava, Barcelona, Spain »